The Unbearable Rolls Around Again 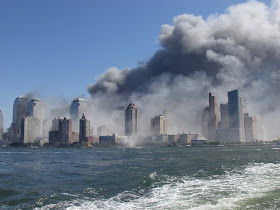 Every year we come to grips with reliving the events of September 11, 2001 all over again—the shock, disbelief, horror, anger, and unremitting sorrow.  The event scars all of us old enough to witness it over, and over and over again as the fatal crashes were replayed on television  and coverage continued non-stop for days.
Every year, I feel that I should write deeply about it.  And every year, I cannot make myself.  The wound is still too raw.
This year marks the 11th anniversary.  Coverage is slightly more muted than last year’s big 10 year mark.  There are other things going on.  An election.  A continuing economic crisis,  the Baseball pennant race and the first week of NFL football.  America’s Got Talent is winding down and The Voice and Dancing With the Stars ratcheting up.  Still there will be plenty of attention paid and some time this morning most of us of a certain age will realize with a lump in our throats that it was just about now that we first heard or saw.
I don’t have much to add.  Except this.  No matter how awful that day was, it was no different except perhaps in degree that what happens regularly in dusty Pakistani villages when death falls suddenly from the skies and obliterates along with—maybe—a Taliban chieftain with a rocket propelled grenade or a low level Al Qaeda— his wife and children, the neighbors, and the boy with the goat just passing by.  Death is death.  Brutal is brutal. Vicious insanity is vicious insanity.
Last year I did screw up enough nerve and energy to do a poem around the anniversary.  Here it is again.

The ash and dust, they say,
rose as high as the skirts
of the ionosphere.
Prevailing winds pushed it
across oceans and around the world.

Most has sifted by now to the earth.
Some orbits still,
motes descending
now and again.

My study is a cluttered mess.
Dust lays on any unattended
horizontal surface,
makes webs in corners,
balls in computer wire rats nests,
devils under bookshelves.

That speck, that one there,
the one by the stapler,
just might be what’s left
of the Dominican cleaner
who left her children
with their Abuela
and went to work
in the sky
only to be vaporized.

Hola, señora.
It is an honor to meet you.