Keep on Keeping on—Hitting the Streets for Abortion Rights 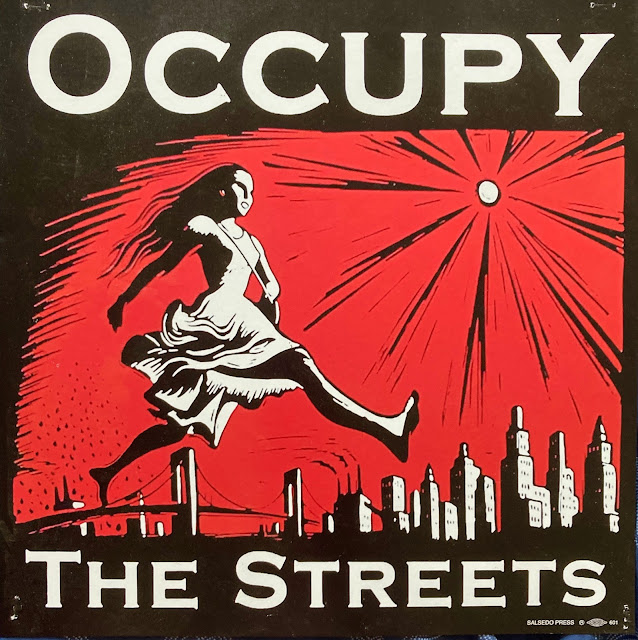 Chicago radical printers Salsedo Press adapted this French graphic by Eric Drooker from Éditions Libertalia for the first Women's March in January 2017.  It fits the current moment just as well.

Those who want to own and control women’s bodies smugly thought they had completely triumphed when the Supreme Court, infected by nominees of a criminal President, tossed decades of “firmly established precedent” to drive a stake into the heart of Roe v Wade and abortion rights.  Red States fell all over themselves to put already enacted draconian limitations in place or to enact new, often bizarre means to coercion and punishment.

But they were wrong.  In a little more than a month, women and their allies have risen up and spoken out in record numbers in all corners of the United States.  They have already upset the reactionary apple cart and gone from protest to the offensive.  In the streets and in the corridors of power they—we—have become an irresistible force.  And now the assumptions of conventional wisdom that Democrats would lose the Federal House of Representative, their tenuous hold on the Senate, state legislative seats, and local government bodies in a non-presidential year are out the window.  A one-two punch of militant direct action, and motivated voter turnout in November protect women’s rights and bodies.

Wherever you live, there are actions planned.  Voter turnout drives and new Vote-Blue-as-if Your-Life-Depended-On-It campaigns for Pro-Choice candidates are ramping up. Join them! 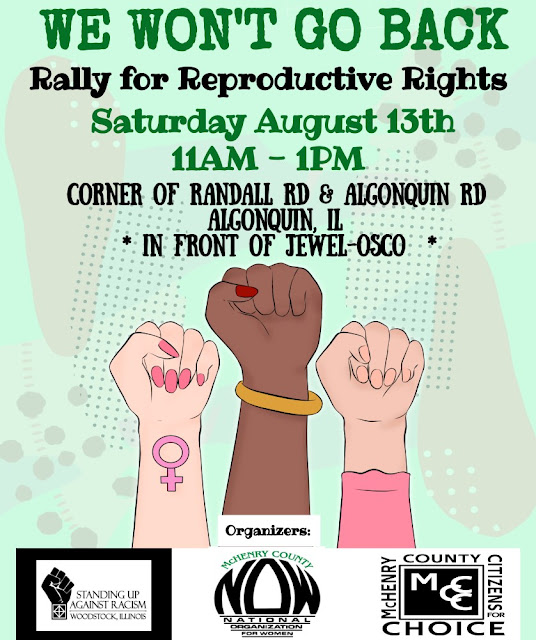 Here in McHenry County Illinois, we will be back for another event, We Won’t Go Back: Rally for Reproductive Rights, this Saturday, August 13 from 11 am to 1 pm at the southeast corner of Randall and Algonquin Roads, right by the Jewel at 103 S. Randall Road in Algonquin. 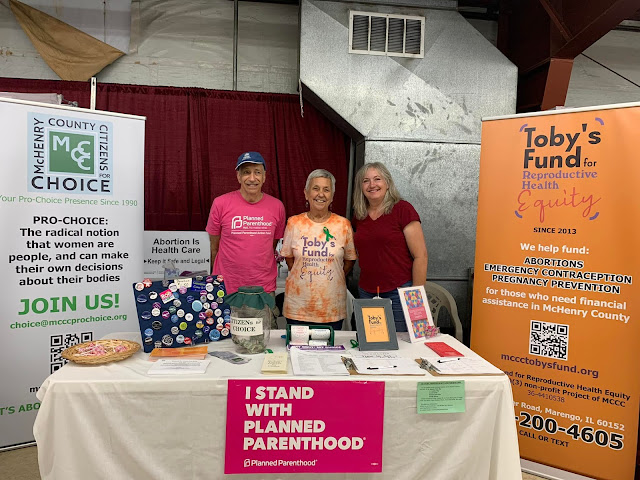 MCCC President Mary Ewart, center, at their booth at the McHenry County Fair last week.  The Old Man pulled a shift there on Friday night.

It’s time to turn our anger into action, so I’m looking forward to seeing you on Saturday at this vitally important event.  Come for the protest, stay for lunch and scrumptious baked goods at the UpRising Cafe that's been so much in the news lately.  Show your support and take a stand against the haters.

Our rally is co-sponsored by McHenry County NOW, MCCC, and Standing Up Against Racism Woodstock.    Please RSVP on the event’s Facebook page.

This will be third pop-up protest in McHenry County since the horrendous Supreme Court decision came down shredding the right to abortion in the U.S., and it will be the biggest yet!  We’ll have signs or bring your own.  Your participation is urgently needed and will make all the difference.  Please put the event on your calendar, plan to attend, and bring all your friends.  And don’t forget to make sure you’re registered to vote:  early voting in the November election begins soon!

Abortion is medical care, and the only people who should be making the decision to carry or terminate a pregnancy are the pregnant person, her doctors, and those of her loved ones she chooses to involve.  It’s no one else’s business. 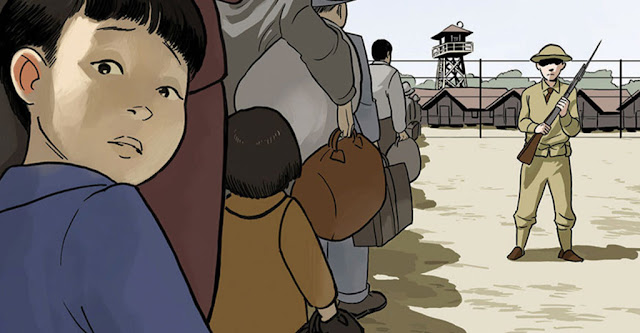 From George Takei's graphic memoir They Called Us Enemy.

On August 10, 1988, more than 45 years after the start of internment, the United States government authorized reparations payments to Japanese-Americans detained during World War II. 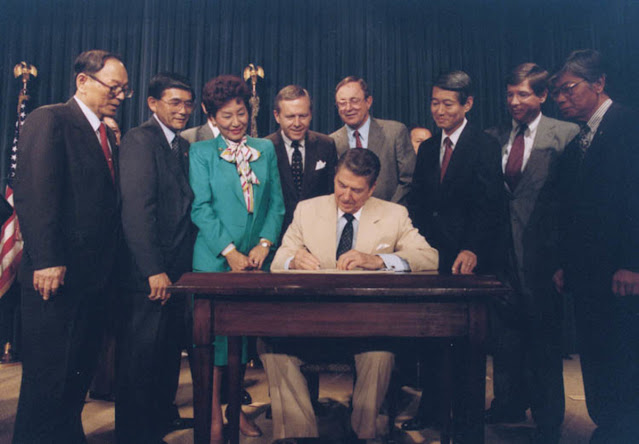 Ten weeks after the December 1941 Japanese attack on Pearl Harbor, President Franklin D. Roosevelt signed Executive Order 9066, ordering 120,000 people of Japanese descent—including 75,000 American citizens—into internment camps. The announced purpose was to protect the West Coast from sabotage and collusion with the enemy, but the perceived threat was based more in racial prejudice than military strategy, as the great majority German-American and Italian-American residents were allowed to remain in their homes undisturbed.  And despite the large pre-war German-American Bund with its openly pro-Nazi rallies and proven networks of spies and saboteurs.

For the length of the war, Americans of Japanese descent and Japanese nationals—many of denied American citizenship based on racially discriminatory quotas—were imprisoned in makeshift internment camps throughout the West Coast and as far east as Arkansas. Interned people were forced to abandon their homes, farms, and businesses, or sell them at rock bottom prices, losing economic stability and generational wealth. The 1944 U.S. Supreme Court decision Korematsu v. U.S., upheld Roosevelt’s executive order. 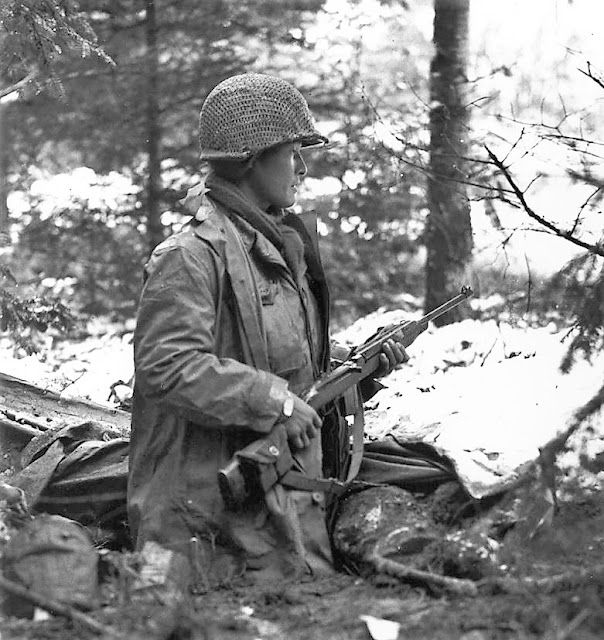 
Despite the trauma the great majority of the detainees remained loyal to America and thousands of their young men volunteered for service in the Armed forces.  That included members of the 442nd Infantry Regiment made up of Nisei—second generation American citizens—that became the most decorated unit of it size during the war for its hard-fighting service in Italy and France

After the war, Japanese-Americans returned home to distrust and resentment. Wartime internment traumatized an entire generation of people and continues to impact their descendants. 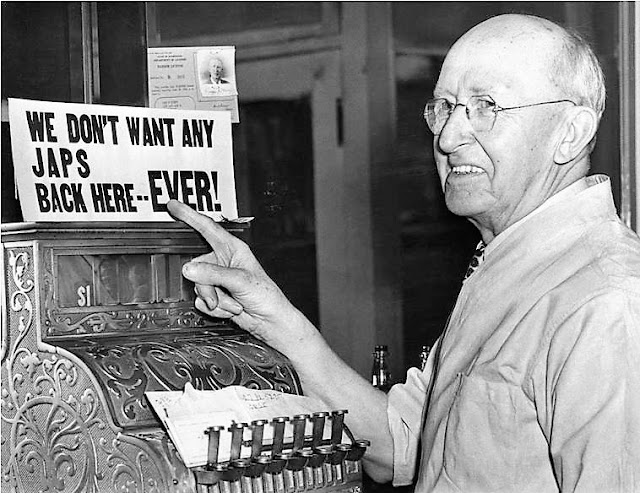 After the war the detainees were often unwanted back in their home communities.


Inspired by the Civil Rights Movement, survivors of internment organized to demand that the United States government address this history.

In 1980, Congress established a commission to investigate the internment camps and their legacy. The report decried Japanese internment as a “grave injustice” and acknowledged that the internment was fueled by “racial prejudice, wartime hysteria, and a failure of political leadership.”

The decade-long efforts of Japanese American civil rights advocates were realized when President Ronald Reagan signed the Civil Liberties Act of 1988, which provided an apology and compensation of $20,000 to living survivors of Japanese internment. An estimated 50,000 people interned during the war died before the reparation act’s passage.

Although Japanese-Americans were gratified by the acknowledgement of the grave injustice done to them and for the formal apology, the cash settlements were a drop in the bucket compared to actual losses. 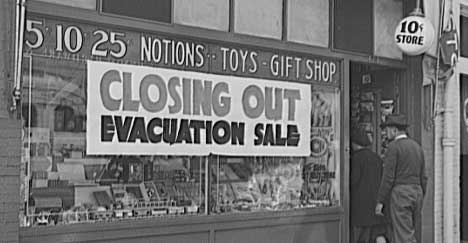 A one day evacuation sale at a Japanese-American owned business.  Many did not even have the timer or opportunity to even attempting to get some value for their abandoned property.


Hard working and industrious Japanese had some of the finest farms on the West Coast, prosperous businesses in towns and cities as well as high-rates of home ownership.  All of that caused resentment and envy by their neighbors, many of whom swooped in to claim their property legally or by winked-at outright theft.  A mere $20,000 came nowhere near making up those losses, especially considering inflation.  And by denying recompense to the tens of thousands who had already died, their heirs were effectively cheated as well.

In the decades after the apology and reparations, a public consensus grew that the internment was one of the blackest episodes in American history.  But new camps—and proposals to actually use former Japanese internment camps—sprang up like mushrooms under the former Cheeto-in-Charge. Trump apologists, right-wing ideologues, and outright White nationalists—not only defend the camps but exulted in them.  And they assailed the birthright citizenship of the Nisei generations.  The Japanese like the millions of Latino American citizens are derided as alien stains on White America.

Always ready to play a xenophobic hand, the former President publicly hyped an executive order to end birthright citizenship.  This Voice of America graphic made clear why he couldn't follow through.


The former Resident shared that view—he threatened to try to end birthright citizenship by fiat—executive order—and many of his Make America Great Again devotees cheered it on.  Although he never had the chance to follow through, an unthinkable cancer continues to spread.

All because we are already forgetting the lessons of Manzanar.