Three Lights Went out in December

The Summer of ’68 Chicago Style—The Whole World Was Watching

Tonight some of us will gather for the last time at the Unitarian Universalist Congregation of Woodstock building to say goodbye.  It will be a virtual shell—most everything will have been boxed, packed up, and hauled to our new church home in McHenry, if everything goes according to plan.  The pews will still be there, and the pulpit.  We will have an informal service and leave taking.  Folks will share memories.  I plan to sing a song This Old Church, based on the 1950’s hit This Old House that I wrote for a worship service production celebrating the centennial of the building in 2006.  Folks will have to bring refreshments and treats from home to share—the coffee urns, founts of UU communion wine, will be gone with everything else.
**
Folks have been worshiping at Dean and South Streets since 1865 when a bunch of returning Civil War veterans and local teetotalers formed the First Congregational Church of Woodstock.  By the following year they had raised a tidy sum and put up a fine new white clapboard church building with an impressive spire in the New England Meeting House style.  It was the largest church in town and could seat 400, although Sunday services never drew nearly that many.
The church was typical in its Puritan, Spartan simplicity.  Originally it had no stove, let alone indoor plumbing.  Members sat through three hour worship services sitting bolt upright on hard pews in layers of heavy winter clothing.  Eventually a couple of heating stoves were added, but were hardly up to the worst of Illinois winters.  Gradually other amenities were added, including even gas lights.
Shortly after the turn of the 20th Century a new minister, Rev. C.H. Bene concluded it was past time for a modern building befitting the congregation’s status as the religious home of many of Woodstock’s most influential citizens.  A building campaign was launched and due to the generosity of the congregation and some of those leading families including the Hoys, Wheats, McConnells, and Wrights the money was raised.
In 1906 the old building was torn down and the new building featuring a squat square Norman bell tower and magnificent gothic arched stained glass windows was erected. Built on an unusual plan, the sanctuary was separated from a large open meeting room by sliding pocket doors. With the doors thrown open the floor of the open room became a stage for Sunday school pageants or amateur theatricals. Around the perimeter of the large room, smaller rooms could be created with folding doors for office space or Sunday school classes.
The new building also symbolized a break with the stricter tenets of traditional Calvinism. Not only was the New England meeting house style abandoned, so was Puritan austerity. The colorful stained glass windows in the German style featuring not only Jesus, but an almost Catholic depiction of Mary, would have been considered idolatrous to earlier generations.
Within two years more money was raised to purchase a magnificent pipe organ which brought a new sophistication to Sunday worship music and encouraged the formation of a choir.  More traditional Congregational practice was to have communal singing by the congregation only, perhaps accompanied by a lap organ.  Generations of young boys would get their Sunday morning exercise hand pumping the bellows for that organ before an electric motor took over the job after World War II.
With rooms for proper Sunday School, young families joined the congregation. The congregation grew a reputation as a bastion of liberal Christianity and an outpost of social gospel preaching under the Rev. William Kilburne from 1909 to 1917.
There were good times and bad.  The Church saw memorials for its young men lost in World War I.
The years after the Great War were difficult. Church attendance dropped dramatically across the nation in the wake of the disillusion caused by the war's carnage, scientific advances that seemed to negate revealed religion, and the wide open hedonism of the Roaring Twenties. The First Congregational Church was not immune. Thus it was in an already weakened state when the Great Depression hit throwing many members out of work. It became a desperate struggle just to pay the minister and keep enough coal on hand to keep the church from freezing on Sunday morning.
The ladies of the Friendly Aid came to the rescue with at least enough money for Sunday morning coal when they pledged an extra 5¢ per week each from their “pin money.”

The Rev. William D. Pratt, who assumed the pulpit in 1932, was a pragmatist who recognized that the Church needed to find new partners to survive. Other local churches were in no better financial condition. Negotiations were undertaken with the Presbyterians and Baptists to create a single Federated Community Church. Votes for this scheme carried the Congregational and Presbyterian churches but failed with the Baptists and the efforts collapsed.

That Socialist Pledge of Allegiance 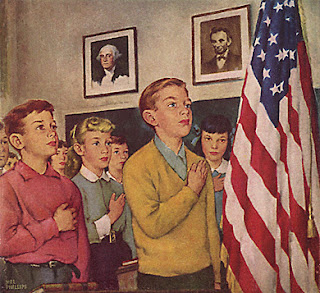 There was a war on.  That might explain why Congress was in session on December 28, 1942 instead of taking their customary leisurely holiday break.  It was on that day that they finally stopped tinkering with an amendment to the Flag Code adopted earlier on June 22.  In doing so they officially recognized the Pledge of Allegiance to the Flag first trotted out for Columbus Day, 1892.

Of course, there were some minor changes to the pledge crafted by Francis Bellamy for the popular children’s magazine Youth’s Companion, where the Baptist minister was on staff.  He was not only a Christian, but also a socialist and first cousin of the utopian socialist Edward Bellamy, whose novel Looking Backwards was one of the most influential books of the late 19th Century.

Pledges of allegiance were still controversial n those days.  After the Civil War former Confederates who wanted their civil rights restored had to swear allegiance to the Union.  Even as late as the 1890 the most un-reconstructed of the old veterans were still refusing to do so.

Bellamy hoped to include the younger generations of Southerners in a new mood of national reconciliation.  But he also wanted to include the children of waves of immigrants then flooding American cities making a new pledge of inclusiveness in their new nation.  He originally wanted to include the words equality and fraternity in the pledge to make that clear, but his editors feared that their inclusion would be resisted by school authorities.

The pledge as he drafted it was published in the magazine without attribution.  But it was promoted heavily to its 500,000 readers and endorsed by the National Education Association.  President William McKinley was prevailed upon to declare it part of the national Columbus Day observances of the 400 anniversary of the Italian navigator’s alleged discovery of the New World.

On October 12, 1892 children across the country recited the following brief pledge at the opening of school:
I pledge allegiance to my flag and the republic for which it stands: one nation indivisible with liberty and justice for all.
It could be said in 12 second flat.  As prescribed in the magazine, the children faced a flag being held by the teacher and held their right arms straight out, palms down in what became the Bellamy Salute.

This was meant to be a onetime event, timed to co-inside with the opening of the World’s Colombian Exposition in Chicago.  But it turned out to be so popular that some schools began using the pledge at the opening of assemblies, concerts, and sporting events.  Others made it a weekly or daily practice.  The hyper patriotism accompanying the Spanish American War and World War II spread the practice further.

Unfortunately for Bellamy, his hopes that the pledge would be inclusionary were dashed almost from the beginning.  Many interpreted it as a litmus test for Americanism—meaning native, White Protestants.  In some schools the children of non-citizen immigrants were forbidden from participating.  Elsewhere those whose religion was thought to preclude the recitations of oaths were debarred.  In the segregated schools of the South, white children often recited the pledge, but Black ones in their schools sometime did not lest they get the idea that they would ever have the rights of citizens.

Tinkering with the original words was meant to make these things clear.  In 1923 an outfit called the National Flag Conference changed the words from “my flag,” to “The Flag of the United States” so that ignorant immigrant children would not believe they were saluting the flag their home countries.  A year later, still unsatisfied, the changed to “The Flag of the United States of America.”

The June ’44 amendment to the Flag Act codified the words:

I pledge allegiance to the flag of the United States of America, and to the republic for which it stands, one nation indivisible, with liberty and justice for all.
The change made in December at the suggestion of President Franklin D. Roosevelt substituted the hand over the heart for civilians for the stiff armed Bellamy salute, which then had an uncomfortable resemblance to the salute used by the Nazis.

Changes were not over.  During the post-war Red Scare complaints were rising that the pledge did not defend American values against Godless Communism.  Louis A. Bowman, a chaplain for the hyper-patriotic Sons of Liberty first inserted the words under God into the pledge in 1948.

The following year Catholic Bishops, eager to prove that Catholics could be “real Americans” and concerned with attacks on the Church in the zone of Soviet influence in Europe and in parts of China under People’s Army control, began a campaign to have the additional language officially adopted.
Despite appeals to President Truman and resolutions introduced in Congress, no amendment to the words was made.

Freshly minted President Dwight Eisenhower had a problem.  Despite his enormous personal popularity as a World War II hero and easy election victory, the right wing of his own party distrusted him for coziness with the Soviets during the war.  Notoriously indifferent to religion, he had come under attack as an atheist.  To combat the later problem, Ike allowed himself to be baptized a Presbyterian, although neither his public practice of worship nor the general lack of God language in his speech changed much.  But on Lincoln’s Birthday, 1954 his ceremonial duties included attending worship at the New York Avenue Presbyterian Church in Washington, where Lincoln had also made occasional public displays of unfelt piety. The Rev. George MacPherson Docherty took advantage of his captive audience by launching into a sermon calling for the inclusion of the religious language in the pledge because Lincoln had apparently inserted the words under God in the Gettysburg Address as delivered.

Eisenhower recognized an opportunity to prove his Americanism and his Christianity.  The next day he forwarded a message to Congress asking the wording of the pledge be changed.  It passed through Congress like an Ex-Lax milkshake.  Ike was able to sign it into law with a flourish on June 14, 1954—Flag Day.

Civil libertarians have opposed the additional language ever since.  Many court challenges have been filed, but none have yet succeeded.  The best that they were able to do is allow children who could not in good conscience recite the pledge excuse themselves.

The controversy, and a feeling that daily recitation was cutting into instructional time, has made about half the states drop the pledge or make it a local option.  In keeping with court decisions the rest of the states “encourage” children to participate in the pledge.

One suspects the whole thing is not what Francis Bellamy had in mind.

Posted by Patrick Murfin at 2:01 AM 2 comments: