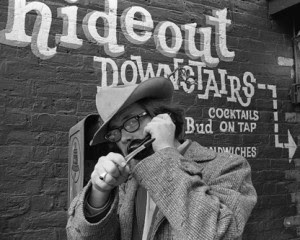 Back in the day.  Taken in Piper’s Alley.  Photo by Jac Stafford.
Note:  This was first posted today in a slightly different form on Third City Blog, a disreputable journal maintained by scoundrels and scallywags.  They tell me I fit right in.


It was April of 1969.  I had left Shimer College after the fall semester of 1968.  I transferred to Columbia College in Chicago where I was going to fulfill my dreams of becoming the next Great American Writer.  We all know how successfully that worked out.
I got my first apartment in the city that January after working a few weeks at a Skokie air-conditioning plant to raise some capital.  I found a 7 room basement apartment in a rundown three flat on Howe Street, one block west of the urban removal wasteland of Larrabee and half a block south of Armitage.  The rent was $78 a month.  No, that isn’t a typo.
But even that was too steep, so I advertised for a roommate and ended up with Michael, a young black kid and minor street hustler.  Turned out that he was not a welcome sight on the street, which was run by a local self-proclaimed Hillybilly gang, The Howe Street Boys.  With Cabrini Green only a few blocks south, Puerto Ricans moving in from the west, and Old Town hippies from the east, those guys felt besieged.
One of my co-workers at the air-conditioning plant, a 50 year old Chicano named José lost his apartment when his son was shot and severely injured while standing in line for some Kentucky Fried Chicken.  José was stuck with the medical bills.  So I let him move into an unfinished room off the kitchen.  The three of us split the $78 rent and the utilities.
I should have suspected we were not welcome by the sneers and cat calls from the Boys every time we went out.  But, with naïve enthusiasm, I tried to make friends.  I learned some of their names.  It turns out they were interested to see if I could connect them with some weed or some hippy  chicks.  None the less, the apartment was burglarized three times.  I didn’t have much to steal.  They took the 35 mm camera I needed for photography class and the little 1950’s era portable TV with rabbit ears that could only pick up one station anyway, and one of the fold-up suitcase style stereos.  Luckily they evidently didn’t know what to do with a typewriter.
Despite all of the warnings, I decided to throw a big party.  I invited all my Shimer friends to come in from Mt. Caroll, guys from the air-conditioning plant, a few high school buds, and the few new folk I knew at Columbia.  I neglected to invite the Howe Street Boys.  Turned out to be a faux pas.
It was not the only one.  A bigger error was not checking the calendar.  I scheduled my big bash for the one year anniversary of Martin Luther King’s assassination.
As scores of folks were flocking to my party—lured by Delaney Daggers, a lethal combo of 180 proof Everclear and orange juice mixed in a garbage can, and plenty of smoke, over by Cabrini Green a reprise of the riots from a year before erupted.  Soon there were sirens everywhere and cop cars were speeding up our street with their windows taped to prevent them from being shattered.
Inside the party was in full roar.  The music was loud, the air thick, and guests beginning to stick to the floor from spilled Daggers.  Then I heard that the Howe Street boys were outside hassling guests as they arrived—took more than a riot to dissuade party goers in those days.  One of my Shimer friends unwisely went out to confront the guys.  Down he went with a bottle upside of his head.
I headed out to rescue him.  As I bent over his sprawling body, I got wacked.  I got up.  Got wacked again.  This possess repeated itself three times, breaking my glasses.  I was surrounded by about ten of them.  And I wasn’t a fighter.  I thought I was a goner.


Then a guest who I didn’t even know, a girl with long brown hair and a ratty old fur coat, charged up the stairs from the basement.  She placed herself between me and my unconscious friend and the Howe Street boys and cussed them a blue streak for being cowards.  She must have astonished them.  She managed to get both of us to safety.


We remained besieged in the apartment the rest of the night.  Scores of folks sprawled where they lay when the Daggers and dope ran out.  Somewhere around dawn, the Howe Street boys were gone.
A few of us wandered out.  I think we ended up at the Lake Front, sharing a final joint or two.
Posted by Patrick Murfin at 6:00 PM 1 comment:

Note: This was supposed to be posted on July 27, on my original blog home Heretic, Rebel a Thing to Flout but the Denial of Service Attack on LiveJournal prevented it. That failure has encouraged me to migrate to Blogger.


It was a quiet Sunday morning just three years ago when a man walked into the Tennessee Valley Unitarian Universalist Church in Knoxville, Tennessee and opened fire as children were presenting a special version of the musical Annie. Two people, 60 year old Greg McKendry, an usher and church board member, and 61 Year old Linda Kraeger, visiting from the Westside Unitarian Universalist Church in Knox County, were killed and several others wounded as panicked children scattered. The toll would have been higher but McHendry placed himself in front of the shooter to protect the children and church members tackled and disarmed the shooter.

Jim David Adkisson, the assailant, was far less sophisticated in many ways than Norwegian mass murder Anders Behring Breivik but writings of both display a deep kinship. Both felt disenfranchised from societies they believed was dominated by “elites” and who were favoring despised minorities over deserving people like themselves. Adkisson probably never heard Breivik’s phrase cultural Marxists, but that was exactly who he thought he was attacking at that church. Aside from sophistication, the only difference between the two killers was the scope of the second attacker’s “success.”

Breivik’s 1500 page manifesto is already circulating on the internet, just as he hoped. And as he hoped, it is being read and appreciated by others in this country as well as in Europe who may respond to his call for more violence. A sliver of racist, crypto-fascist, neo-Nazi, and skin head gangs have been preaching—and practicing—similar violence in this country for years. Breivik may well move them to attempting bigger, bolder attacks. They may well choose not the protected halls of government, but “soft” targets like a Unitarian Universalist Church or a political summer camp to wreck their carnage. And they will be cheered on more or less overtly by a wider camp of insurrectionist right wing ideologues like Glenn Beck.

After the attack in Norway, young survivors of the brutal shooting attack vowed to meet the threat of racist violence with “more democracy, more diversity.” In Knoxville at a memorial service two days after the shooting the children of the church, at their own insistence, came to sing the song that they could not on that awful morning. As the large crowd of mourners from all faiths and all communities of the city listened in tears they began to sing, “The sun will come out tomorrow…”

A year later I read this poem in commemoration at my church in Woodstock, Illinois.

They are about to sing about Tomorrow,

as fresh and delicate as impatiens in the dew,

when Yesterday, desperate and degraded

bursts through the doors

from the business end of a sawed of shotgun.

Tomorrow will have to wait,

a life full of missed what-ifs

of blame firmly fixed on Them,

the very Them despised by

all the herald angels of perfect virtue—

has something to say.

the Now when things happen,

not the reflections of Yesterday

or the shadows of Tomorrow,

the Now that always Is.

the innocent and the guilty,

Tomorrow there will be villain and martyrs,

will tell you all about it in certain detail.

And yet Tomorrow those dewy impatiens

will sing at last—

The sun will come out Tomorrow,

bet your bottom dollar on tomorrow

How wise those little Flowers

To reunite us all in Sunshine.

A New Home for an Old Blog 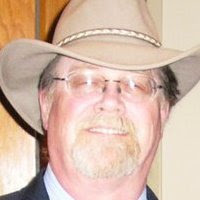 In January 2005 I recklessly launched a new blog, Heretic, Rebel, a Thing to Flout over at LiveJournal. Probably not the best choice in the world, but I didn’t know better. I have kept it up ever since. There have been some lean months here or there, but I have been amazingly faithful. Content has evolved. At first I thought I might become some kind of great commentator. But the blog-o-sphere was already crowded with smarter guys and gal. Sometimes it seemed fade back to just a bulletin board of meetings and activities I was involved in. I shamelessly inflicted poetry from time to time which almost no one ever read. In recent years I have run heavily to historical notes with an admixture of whatever the hell else I wanted to scribble about on a given day.

Despite its limitations—like most people avoid it like the plague—LiveJournal was a functional platform. Recently, however it has become unreliable. Based in Russia for the past few years their servers have come under attack for one reason or another occasional interrupting service. I have been unable to post since Monday due to a severe Denial of Service Attack, which they do not seem to be able to deal with. That was the last straw.

I am moving my little pop stand and the far end of the cul-de-sac to Blogger. I hope long time readers will find and follow. Beginning now I will post all entries here. I many continue to post at LiveJournal as well, at least for a while, if it ever gets up and running. And I hope to find a way to transfer my extensive blog archives to this site. I’m told it can be done, but several hours of trying to figure it out have left me anxious and exhausted. Maybe someday.

I will leave the LiveJournal blog up, so that the archives will remain available.

I appreciate any feedback you might have on this re-launch.