The USS Princeton—The SNAFU that Nearly Wiped out an Administrtion


The USS Princeton was supposed to be the future of the United States Navy.  Fairly bursting with new technology it was likely the most advanced warship of its class in the world, surpassing even anything floated the British Royal Navy, then the undisputed master of the oceans of the globe.
She was the vision of Captain Robert F. Stockton, a politically well-connected former Senator from New Jersey and the beau ideal of a dashing officer.  After resuming a naval career interrupted by years in business and politics, he turned down an offer by President John Tyler to become Secretary of the Navy, preferring an active command, preferably on the new class of war ship he envisioned.
It was Stockton’s passion—and political clout—that convinced the Navy and a notoriously tight fisted Congress to authorize the construction of a steam powered corvette armed by two heavy guns capable of throwing shot or shell a distance of up to five miles.  Her speed, punch and long range would make her a threat to even the heaviest ship of the line.

She was designed leading naval architect and inventor of the era, Swedish born John Ericsson, who would later win fame as the  designer of the Civil War ironclad USS Monitor.  The sleek 969 ton ship had three masts with square rigging under sail.  But her breakthrough was her engines and propulsion.  Ericksson designed two vibrating lever steam engines built by Merrick & Towne, of Philadelphia. The advanced engines burned Pennsylvania hard coal rather than bulky and inefficient wood.  They were installed totally below the ship’s water line turned a six-bladed screw propeller 14 feet in diameter mounted aft.  She would be the first warship in the world to abandon side or stern paddle wheels and be propelled by a screw.  Another innovation the smoke funnel could fold down when she was running under sail to get out of the way of the spars.
The keel to the new ship, named for Captain Stockton’s home town was laid at the Philadelphia Navy Yard on October 20, 1842.  Ericsson personally supervised the construction under the watchful and probably meddlesome eye of Stockton himself.
She was launched and commissioned in September 1843 with Stockton in command.  Following a test run on the Delaware River, the Princeton was taken out for sea trial in October.  After running up the coast to New York City, Stockton matched her in a race against the famed British steam packet SS Great Western which in those years perpetually held the speed records for transatlantic crossing.  It was a sprint rather than a long race, but the Princeton won handily making newspaper headlines and establishing her as a legitimate threat against the lumbering armadas of the world.
In January of 1843 she was ready for regular service and Stockton took her to New York to be fitted with her two massive guns.  Both were smooth bore muzzle loading 12” wrought iron cannons capable of firing a 225 pound shot 5 miles with 50 pound charge.  The guns were so impressive that each was given a name.
Despite their similarities, however, there was a critical difference.  The Orator, soon renamed the Oregon as a taunt to the British over the disputed boundary of that territory, was designed by Ericsson and cast at the Mersey Iron Works in England in 1841 and shipped to the states awaiting the ship who could handle it.  Critically, in a dramatic innovation the breech was re-enforced with a built-up construction application red-hot iron hoops which pre-tensioned the gun and greatly increased the charge the breech could withstand.
Unfortunately, the Navy did not have enough money to have two guns manufactured in England.  Instead Stockton sought to duplicate the capabilities of the gun by supervising the creation of the Peacemaker at Hogg and Delamater in New York City.  Stockton never consulted Erickson and did not appreciate the critical importance of the re-enforcing rings.  Instead he attempted to achieve the same results by simply by making the breech thicker.  He did not realize that given the innate brittle nature of wrought iron, the new breech could not withstand the huge sudden build-up of pressure when being fired.  Sooner or later it would fail catastrophically.
Both guns benefited from another Ericson innovation, a re-coil absorption system that would keep the ship from being rolled by the power of its gun blasts.
After they were fitted Stockton on test fired the guns a few times before sailing to Washington to show off and to lobby for funds to build a whole flotilla of Princeton class corvettes.  After arriving in January of 1844, Stockton showed her off on several short cruised on the Potomac in February caring Navy brass and civilians as passengers.  On each occasion she fired her guns at least once. 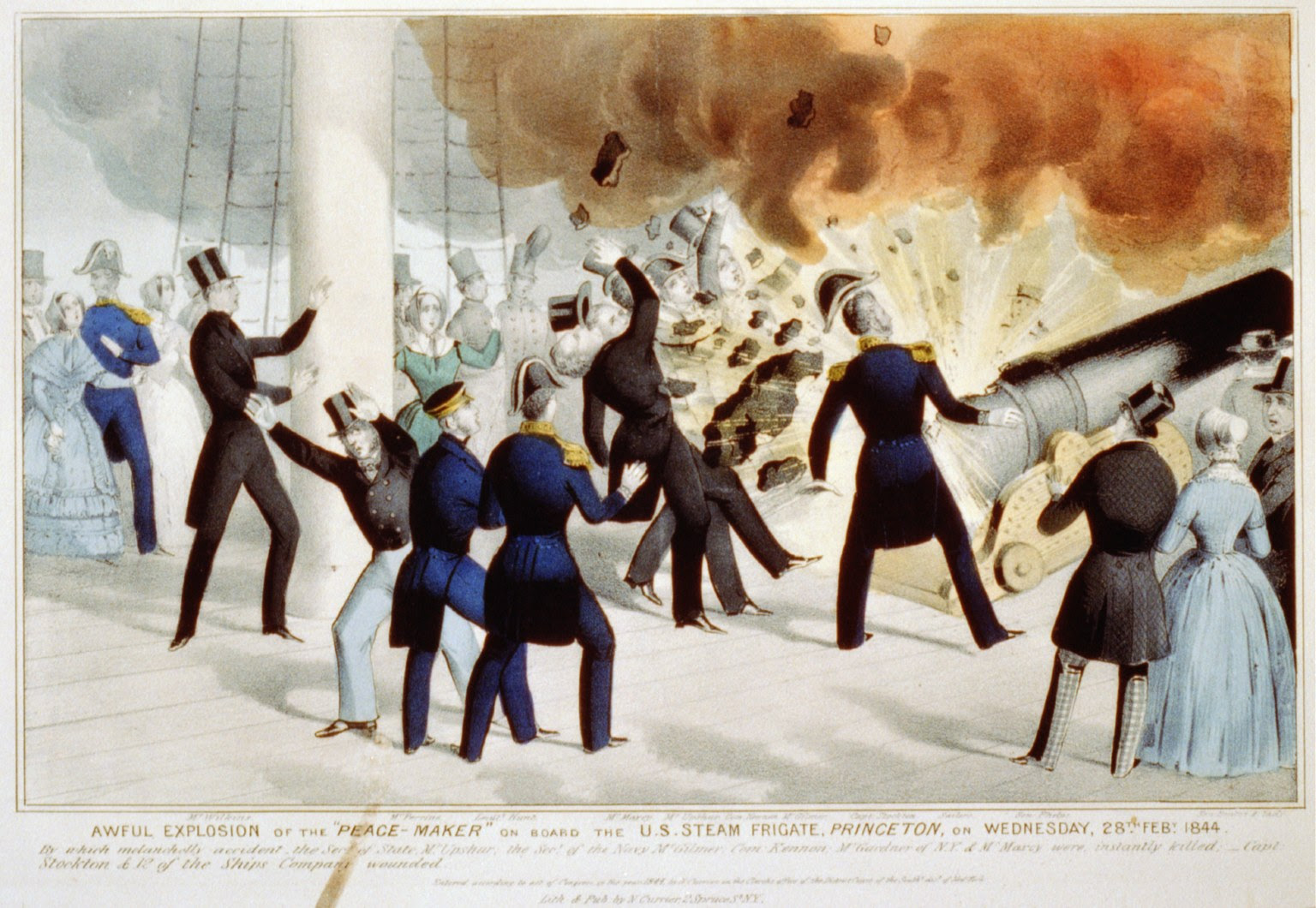 But the big day was February 28.  On that day she picked up President Tyler, his cabinet, assorted politicians, and even iconic former First Lady Dolly Madison at Alexandria, Virginia.  The cruise was a gay affair as visitors crowded the deck to witness a firing of the two great guns.  After a break for an elegant lunch below decks most of the visitors returned to the deck for one more thrilling test fire.  President Tyler, who could not abide the noise, remained below.
On the second firing of the Peacemaker the breech exploded.  Killed instantly were Secretary of State Abel P. Upshur, Secretary of the Navy Thomas Gilmer, Chief of the Bureau of Construction Equipment and Repairs Capt. Beverly Kennon, Virgil Maxcy former Chargé d’Affaires to Belgium, Colonel David Gardiner of New York, the President‘s slave and valet Armistead, and two sailors.  Several others, including Stockton, were injured by shrapnel.
The President and the lovely Miss Julia Gardner who had been sharing private time below, rushed to the deck to find a scene of horror and carnage.  When Miss Gardner discovered her father among the dead, she collapsed into the President’s arms.  The two were later married.
There was an understandable public outrage at the accident that had nearly obliterated the whole administration.  Both Congress and the Navy launched investigations.  It would have meant the end of a career to any other officer, but Stockton was well protected politically.  A Court of Inquiry investigating the cause of the explosion exonerated Stockton blaming the explosion on Ericsson who had nothing to do with the design or construction of the Peacemaker.  This understandably embittered Ericsson who refused to work again for the Navy until the emergency of the Civil War.

Stockton was promoted to Commodore and won fame in the Mexican War as the commander of the Navy squadron that helped seize California.  He was subsequently named first military governor and had a town named after him.  He later served as a Democratic Senator from New Jersey and attempted to mediate a peaceful solution to southern secession.  He was named commander of the New Jersey Militia when fears of a Southern invasion were at their height.  He died full of honors in 1866.
The once proud Princeton fared worse.  She served in the Home Squadron until 1847 and was then assigned duty in the Mediterranean which caused her to miss action in the Mexican war.  Upon return to the United States in 1849 her timbers were found rotting from poor maintenance.  She was decommissioned and broken up for scrap at the Boston Navy Yard on June 17, 1849 after less than six years active service.
Congress never approved plans for a flotilla of Princeton class ships, which would have been invaluable in maintaining the blockade of the South during the Civil War.
Two years later her innovative twin engines were used in a new Princeton, the first of five successors bearing that name including a famous World War II aircraft carrier lost at the Battle of Leyte Gulf in 1944 and a guided missile cruiser commissioned in 1989, currently in active service.


Posted by Patrick Murfin at 3:08 AM No comments: