May Day Proles, Protest, and Poetry

Well it is the last day of April, a Sunday no less.  So this is the wind-up of our National Poetry Month posts which this year shamelessly celebrated and promoted the poetry of resistance.  Tomorrow I will take a breather from a killer pace of production and post my annual May Day entry.  I will also be hopping on a Metra train not long after getting off from my overnight shift at the gas station/convenience store and heading for Chicago for a major May Day march.  And I couldn’t be more excited.
May Day, or International Labor Day, which has its roots in Chicago and the aftermath of the execution of the Haymarket Martyrs, has been making a strong comeback in the U.S.  in recent years—reclaimed by labor unions which had abandoned it for fear of being associated Commies and Ruskies, and re-invigorated by immigrant rights activists.  This a year a generation that discovered that democratic socialism was as comfortable a fit as a well washed t-shirt with a catchy slogan on it, and many others radicalized by the ascendance of Cheeto fascism and it broad attacks on minorities, immigrants, women, the environment, and basic human and civil rights are joining in actions across the country. 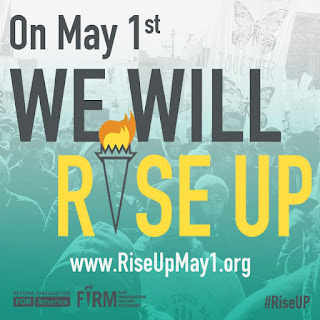 There are still plenty of independent local actions and commemorations put on by labor unions, left sectarians, and others and small-in-numbers Black Block Anarchists and Anti-fascists will be out looking for fights or staging mini-rampages, many participants tomorrow will be attending events linked to Rise Up! in support of immigrants’ rights.  Organizers are calling for what many are categorizing as a General Strike:
From those who cook the food we eat to those who build the businesses of the future, all are affected by the Trump Administration’s attack on immigrants. America doesn’t work without immigrants.
On May 1st, we will not work, we will not go to school, we will not shop to show that our country will not move forward without our immigrant neighbors.
While the day will fall short of the kind of revolutionary General Strike than can bring a nation to a standstill, significant work stoppages are expected in some cities, and some immigrant dependent industries especially food service and agriculture are expected to be hit hard.  In addition tens of thousands of individual activists have pledged to skip work and boycott shopping and scores of student strikes and walkouts are planned at high schools and colleges.
More than eighty labor unions, immigrants’ rights groups, civil rights organization, community groups, religious organizations, and new-found allies like those from the Women’s and LBGT rights, and climate justice groups have endorsed the national call with more involved in individual local actions.  Many have linked the May Day marches with more than a week of concerted resistance that began with the March for Science and continued through yesterday’s People’s Climate Marches.  That includes the Unitarian Universalist Association (UUA) and the Unitarian Universalist Service Committee (UUSC) united in their new joint initiative Love Resists.

So on Monday I will be donning red and black and tapping my inner Wobbly to attend May Day—1 de Mayo: Chicago Fights Back—Chicago No Se Deja with a few thousand of my closest friends:
1pm—Rally at Union Park (Ashland and Lake) Sponsored by Chicago May Day Coalition and Arise Chicago
2pm—March from Union Park to Daley Plaza
4pm—Rally at Daley Plaza Sponsored by the Chicago Federation of Labor, Illinois Coalition for Immigrant and Refugee Rights, and Sierra Club Illinois
Now for some May Day poetry and poetry to remember why this is International Working Peoples day and not a fey spring romp among the flowers!


Robert Pinsky is one of America’s best known poets, a former Poet Laureate, an advocate of public poetry—the idea that verse should be a meaningful and integral part of American life.


The back, the yoke, the yardage. Lapped seams,
The nearly invisible stitches along the collar
Turned in a sweatshop by Koreans or Malaysians

Of cuff I button at my wrist. The presser, the cutter,
The wringer, the mangle. The needle, the union,
The treadle, the bobbin. The code. The infamous blaze

At the Triangle Factory in nineteen-eleven.
One hundred and forty-six died in the flames
On the ninth floor, no hydrants, no fire escapes—

The witness in a building across the street
Who watched how a young man helped a girl to step
Up to the windowsill, then held her out

Away from the masonry wall and let her drop.
And then another. As if he were helping them up
To enter a streetcar, and not eternity.

A third before he dropped her put her arms
Around his neck and kissed him. Then he held
Her into space, and dropped her. Almost at once

He stepped to the sill himself, his jacket flared
And fluttered up from his shirt as he came down,
Air filling up the legs of his gray trousers—

Like Hart Crane’s Bedlamite, “shrill shirt ballooning.”
Wonderful how the pattern matches perfectly
Across the placket and over the twin bar-tacked

Corners of both pockets, like a strict rhyme
Or a major chord.   Prints, plaids, checks,
Houndstooth, Tattersall, Madras. The clan tartans

Invented by mill-owners inspired by the hoax of Ossian,
To control their savage Scottish workers, tamed
By a fabricated heraldry: MacGregor,

Bailey, MacMartin. The kilt, devised for workers
To wear among the dusty clattering looms.
Weavers, carders, spinners. The loader,

The docker, the navvy. The planter, the picker, the sorter
Sweating at her machine in a litter of cotton
As slaves in calico headrags sweated in fields:

George Herbert, your descendant is a Black
Lady in South Carolina, her name is Irma
And she inspected my shirt. Its color and fit

And feel and its clean smell have satisfied
Both her and me. We have culled its cost and quality
Down to the buttons of simulated bone,

The buttonholes, the sizing, the facing, the characters
Printed in black on neckband and tail. The shape,
The label, the labor, the color, the shade. The shirt.

Alfred Hayes was a British-born screenwriter, television writer, novelist, and poet, who worked in Italy and the United States.  He is known for his poem Joe Hill—“I dreamed I saw Joe Hill last night”—later  set to music by Earl Robinson and sung by Paul Robeson, Pete Seeger, and Joan Baez.  This was written in 1934 at the height of the Depression and during a wave of labor militancy in The New Masses


Into the Street May 1st
Into the streets May First!
Into the roaring Square!
Shake the midtown towers!
Shatter the downtown air!
Come with a storm of banners,
Come with an earthquake tread,
Bells, hurl out of your belfries,
Red flag, leap out your red!
Out of the shops and factories,
Up with the sickle and hammer,
Comrades, these are our tools,
A song and a banner!
Roll song, from the sea of our hearts,
Banner, leap and be free;
Song and banner together,
Down with the bourgeoisie!
Sweep the big city, march forward,
The day is a barricade;
We hurl the bright bomb of the sun,
The moon like a hand grenade.
Pour forth like a second flood!
Thunder the alps of the air!
Subways are roaring our millions—
Comrades, into the square.

Joe, i have come home
home to a secret that nobody knows
home seeking refuge from the dream/lie
you left this place for
home…home to a place i have never seen
except in my lost dreams
except in the lies that have bled the both of us, Joe
except in the faces of every other who has bled
like us
like us

this is our simple dream
to love unfettered as the clouds
as the ships in the harbor
the docks where we stand, Joe
the platforms we build
in order to fly

my only uncertainty
for which of us do i now weep?

And finally a short new one from the Old Man.

It ain’t May I Day, Bub!
No, siree.
It’s get the hell out of our way
May Day,
beg no damn pardon
May Day,
get your paws off of her
May Day,
leave those kids alone
May Day,
all hands on deck
May Day,
we and us and ours
May Day,
five finger fist
May Day,
We win,
May Day
Venceremos,
May Day,
Get it now?