That Nice Beatle Gets Mad and Writes a Song 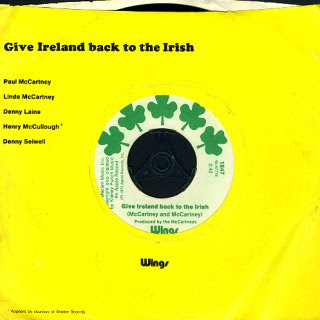 Tell me how would you like it
If on your way to work
You were stopped by Irish soldiers
Would you lie down do nothing
Would you give in, or go berserk

Posted by Patrick Murfin at 1:04 PM No comments: Links to this post

Email ThisBlogThis!Share to TwitterShare to FacebookShare to Pinterest
Labels: Belfast, Bloody Sunday, Give Ireland Back to the Irish, Northern Ireland, Paul McCartney, protest, The Beatles, Wings


It had been George Washington’s dream first.  And a big one.  Decades later it seemed that despite enormous obstacles, it was finally coming to pass.  But on January 29, 1834 the hundreds of immigrant Irish, Dutch, German laborers downed their picks and shovels in protest to the brutal conditions of hewing the ditch by hand from the stony soil of Virginia (now West Virginia) from first light to the descending gloaming seven days a week.  Blacks were also on the job—mostly slaves contracted from local plantations—but whether they joined the impromptu strike is unclear.  Slave or free all were ill clothed and given little more than a single thin blanket in the brutal winter weather.  Wages—for those who got paid at all—were less than a dollar a day and the use of tools and such were charged to the workers. Supervisors and foremen on the job were roughed up and some Chesapeake & Ohio Canal Company property was damaged.
The company claimed insurrection and riot and appealed for aid.  In Washington, DC the crusty and volatile President Andrew Jackson wasted no time in ordering Federal Troops to suppress the “rebellion.”  It was the first time the Army was ever called upon to suppress a strike.  It would not be the last.
When they arrived on the scene the smartly dressed Army Regulars had no trouble putting down the strike by men armed only with stones and brickbats.  It is unclear if shots were fired or the flash of bayonets was sufficient to disperse the strikers, who had no organization or union.  A few identified “leaders” were arrested, others fled.  Most of the men sullenly went back to work under armed guard.  It is presumed that any slaves who participated where much more brutally handled by their owners or overseers with the lash.
It all began before the Revolution.  Virginia planter, surveyor, and militia officer Col. George Washington had vast land claims in the Ohio wilderness which he dreamed of filling with settlers on 99 year leases to the land that he owned.  But besides persistent hostility by Native American nations, and the British policy confining legal settlement to the east of the Allegany Mountains, the biggest obstacle to making those dreams come true was the near geographic impossibility of easy access to and from the land.  Those mountains divided the watersheds of the Ohio and Potomac rivers and provided a rugged barrier to even land access.
Washington wanted to build canals, complete with locks to raise boats to higher and higher elevations to circumvent and push past the rapids which were the navigable limits of the Potomac.  In 1772 he received a Charter from the Colony of Virginia to survey possible routes.  But before work could progress beyond the planning stage, the Revolution intervened and Washington was occupied elsewhere.
But he never forgot the pet project.   Back home at Mount Vernon in 1785 Washington formed the Patowmack Company in. The Company built short connecting canals along the Maryland and Virginia shorelines of Chesapeake Bay.  The lock systems at Little Falls, Maryland, and Great Falls, Virginia, were innovative in concept and construction. Washington himself sometimes visited construction sites and supervised the dangerous work of removing earth and boulders by manual labor himself.
Now confident that his scheme would work, Washington began to plan more inland sections.  A call to another job—as President of the United States—interrupted his plans, but he looked forward to resuming work in retirement.
Unfortunately that retirement did not last long and when the great man died in 1799, the Patowmack Company folded.
Almost 25 years later, in 1823 Virginia and Maryland planters began to fret that the Erie Canal, which was nearing completion in upstate New York would leave their region far behind in economic growth as all or most of the production from the rapidly growing states north of the Ohio would be funneled to the Great Lakes, and via the Canal and Hudson River to New York City.  They organized and got chartered the new Chesapeake and Ohio Canal Company.
Five years later in1828 Yankee born President John Quincy Adams, probably with some qualms about the possible effect on the westward spread of slavery, ceremonially turned the first spade of earth.
Progress was slow and arduous as the canal ran parallel to the Potomac.  There had been other sporadic work stoppages.   Difficulties in the era of repeated financial panics also interrupted work.  Then there was bad weather, the increasingly difficult terrain, and even a cholera epidemic.  In late 1822 the ditch finally reached the critical river port of Harpers Ferry.  Workers were pushing on to Williamsport when the trouble broke out.
Work continued with more interruptions and a lawsuit between the Canal Company and the Baltimore and Ohio Railroad about a right of way to cross from the Virginia to the Maryland side of the river also complicated matters.
In 1850 the canal finally reached Columbia, Maryland far short of the goal of connecting with the Ohio.  But by that time the rapid spread of railroads, particularly the B&O, had rendered completing the project obsolete.  Washington’s grand canal never got any further.
But the existing ditch was still useful.  Boats, originally romantically named gondolas later barges, used the water way until it finally went out of business in 1924.
Today you can visit the Chesapeake and Ohio Canal National Historical Park and hike along the tow path.
The bloody tradition of using Federal troops as strike breakers out lived the canal.

Posted by Patrick Murfin at 10:49 AM No comments: Links to this post

As Woody Would Have Said, “So Long, Pete, It’s Been Good to Know Ya”

Posted by Patrick Murfin at 10:00 AM No comments: Links to this post