Congress never approved plans for a flotilla of Princeton class ships, which would have been invaluable in maintaining the blockade of the South during the Civil War.

Two years later her innovative twin engines were used in a new Princeton, the first of five successors bearing that name including a guided missile cruiser commissioned in 1989, currently in active service.
Posted by Patrick Murfin at 4:34 AM 1 comment: 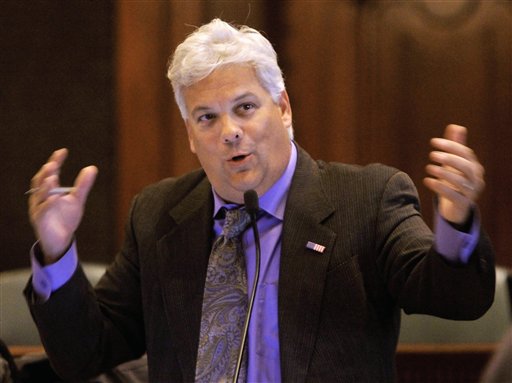 Now that the Marriage Equality bill has cleared the Illinois House Executive Committee, it is heading for consideration on the House floor.  And the battle for the hearts and minds of individual legislators is heating up.

Here in McHenry County that battle is focusing on Democratic Representative Jack Franks of the 63rd District which encompasses about half of the county.  Jack is considered a swing vote but leaning against.   The rest of the county’s representatives are all Republicans and are unanimously expected to vote against gender equal marriage.

The Social Justice Committee of the Unitarian Universalist Congregation in McHenry and our allies from PFLAG have lobbied Jack with a personal visit in mass to his district office.  On Monday, opponents of the bill countered with a well publicized demonstration outside that office—although their total numbers including children did not equal our delegation.

Now we learn that robo-calls targeting voters in Jack’s district are being made by the notorious right wing American Family Association, which has been identified by the Hatewatch program of the Southern Poverty Law Center as a Hate Group urging people to call him and oppose the legislation.  He may get a ton of calls in response. It is critical that we counter that.

Call Jack Franks Today!  Call him tomorrow!  Contact your friends and relations to call him.  Leave a brief, polite, but firm message that you support marriage equality and 1 good reason.  If you have previously supported Jack, it doesn’t hurt to mention that as well.  Call the Woodstock office at 815 334-0063 or Springfield at 217 782-1717.
Posted by Patrick Murfin at 3:44 PM No comments:

Dan Sickles--First Person to be Acquitted by Reason of Insanity