Let’s Talk About: Medicare for All Forum at Tree of Life UU Aims to Inform 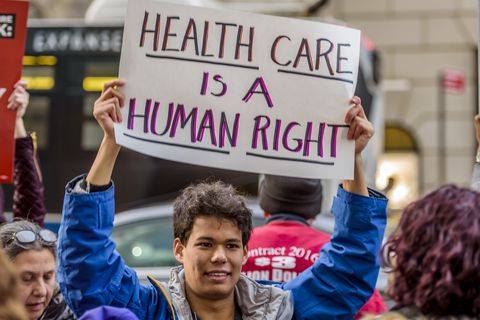 Tree of Life Unitarian Universalist Congregation’s Social Justice Team will host a forum Let’s Talk About: Medicare for All on Wednesday, March 6 from 7-10 pm at the church, 5603 Bull Valley Road in McHenry, Illinois.  The forum plans to inform the public regarding the benefits of a single payer system for healthcare.

“Our faith calls us to insist on fair and kind treatment to all.  In this country that we have people skipping vital medications because they simply can’t afford it.  Families are going bankrupt due to medical bills.  Businesses are struggling because healthcare costs for owners and employees are skyrocketing.  Fair and kind treatment means that all should have access to healthcare” says Dr. Lisa Messinger, a local pediatrician who will host and facilitate a panel which will include:

J.J. Wett, a celebrated advocate for people with disabilities, will present a patient perspective of the current healthcare system and how it would improve with the Medicare for All model.

Peter Janko, a local political activist, small business owner, and former WCPT radio program host will discuss the economic impact that our healthcare system on business owners as well as how single payer systems work in other countries.

Dr. John Perryman, a leader in Northern Illinois with Physicians for a National Health Program, will discuss Medicare for All further including more specific information of the current legislation that is being considered.
Questions and discussion will follow the panel presentation.
The program is free and open to the public.
For more information contact Tree of Life at 815 322-2464, e-mail office@treeoflifeuu.org  or visit https://www.facebook.com/events/620229261761518/ .
Posted by Patrick Murfin at 3:10 AM No comments:

The Academy Awards—Humble Beginning to Glitz and Glam

On May 16, 1929 the first Academy Awards were presented at a banquet at the Hollywood Roosevelt Hotel.  270 people plunked down $5 for tickets to the black tie event.
In many ways it was indistinguishable from awards dinners common to any industry.  The main event seemed to be the dinner.  The awards were presented in a brisk 15 minutes after the deserts were cleared and after speeches by founders of the Academy of Motion Picture Arts and Sciences, including producer Louis B. Mayer who was a prime mover in establishing the organization just two years before.

The Academy’s first President, actor Douglas Fairbanks, shared hosting and presenting with his successor, director Cecil B. DeMille.  There we no surprises.  Award recipients had been announced weeks earlier.
While many things would change about the annual ceremonies, one constant was the Award itself, a hefty gold statuette of a sleek man holding a sword point down with his hands clasp in front of him.  In 1931 Bette Davis purportedly gave it an enduring nickname by observing, “This looks just like my uncle Oscar.”  Some film historians put the quip into other mouths.
Recipients of the first Academy Awards were mostly for films released in 1927.  Many awards, including those for acting were given not for a single film, but for a body of work during the year.  There were two best picture awards, Outstanding Picture, Production for popular, mainstream hits, and Outstanding Picture, Unique and Artistic Production for what we would today call an art film.

The action-packed World War I flying adventure Wings starting Buddy Rodgers, Gary Cooper, and Clara Bow won the commercial award.  Sunrise: A Song of Two Humans, an allegorical film by German director F. W. Murnau staring George O’Brien as The Husband and Janet Gaynor as The Wife won the art award.  The film included music and sound effects, but no dialog on a sound track using Fox-Movietone Sound-on-Film system.
It was a very good year for 22 year old Gaynor.  She won Best Actress in a Leading Role for her performance as the long suffering wife and for two films she made with director Frank Borzage and leading man Charles Farrell,  Seventh Heaven, and Street Angel.  Borzage took home the trophy as Best Director, Dramatic Picture for the charming romance Seventh Heaven.
That year there was also a separate award for Best Director, Comedy Picture which was won by Lewis Milestone for Two American Knights, produced by Howard Hughes and staring William Boyd—the future Hopalong Cassidy—and Mary Astor.

Best Actor in Leading Roll went to German character actor Emil Jannings for work in two pictures, The Lost Command as an exiled Czarist general, and The Way of All Flesh as a businessman tempted and dishonored.
There were three writing awards.  The former newspaper man Ben Hecht won Best Writing, Original Story for the early gangster flick Underworld.  Best Writing, Adapted Story went once again to Seventh Heaven for Benjamin Glazer’s screenplay.  Joseph Farnham won in the doomed category Best Writing, Title Cards for his whole body of work in 1927 which included Fair Co-Ed, Laugh, Clown, Laugh, and Telling the World.
Awards were also given out for Best Cinematography (Sunrise), Best Engineering Effects (Wings), and Best Art Direction.
Two Honorary awards were given.  The first was to Charles Chaplain, who had been withdrawn from consideration in several categories of regular award because he did, well, everything.  His citation read, “For versatility and genius in acting, writing, directing and producing The Circus.”   The dawning of a new age was recognized in a special award to Warner Brothers “For producing The Jazz Singer, the pioneer outstanding talking picture, which has revolutionized the industry.”

Even the most optimistic boosters of the new awards did not foresee how popular—and powerful—they would become.  The eyes of Hollywood were opened when winning films were re-released to big audiences.  Sunrise, in particular, which had made hardly any money in its first release suddenly found an audience.  Thereafter the Awards—and the presentation showcases for them—would become a very big deal indeed in Tinsel Town.
Posted by Patrick Murfin at 3:31 PM No comments:

On February 23, 1821 John Keats, the quintessential English Romantic poet, died in Rome of the poignantly tragic disease of the era, consumption (tuberculosis), at the age of 25.
The orphaned son of a livery stable keeper and a consumptive mother, young Keats fell under the guardianship of a pair of tea brokers who provided him with some of a gentleman’s education before binding him to an apprenticeship with an apothecary-surgeon in London.  Keats dutifully completed the apprenticeship but never practiced the profession.
Instead, he threw himself into writing poetry.  After his first sonnets were published and respectably received, he was introduced into the Romantic literary circle that included William Wordsworth and Percy Bysshe Shelley.  With their help and encouragement he published his first collection, Poems by John Keats to a generally favorable reception in 1817.  His follow-up, Endimion, however, was savaged by establishment critics.

He consoled himself on a walking tour of Northern England and Scotland the following year before returning home to nurse his brother who was dying of consumption.  He fell in doomed love with Fanny Brawne, who inspired a creative spurt of some of Keats’s most enduring work, including his famous Odes.
He contracted the disease from his brother, if he was not already exposed, and began his own decline.

In 1820 his final collection, Lamia, Isabella, The Eve of St. Agnes, and Other Poems was published.  The title poems were rooted in semi-mythical historic pasts.  The collection also included his Odes and a fragment of the epic poem Hyperion on which he had been working for years but would never complete.

His health failing and his hopes for marriage to Fanny doomed, friends financed a trip to Italy to get him out of the cold and damp of England.  The sun cure failed and he died in Rome at the home of the painter Joseph Severn.
He was buried in the Protestant Cemetery where a number of notable British and American expatriates  and tourists found final rest.

When I have Fears That I May Cease to Be

When I have fears that I may cease to be
Before my pen has gleaned my teeming brain,
Before high-pilèd books, in charactery,
Hold like rich garners the full ripened grain;
When I behold, upon the night’s starred face,
Huge cloudy symbols of a high romance,
And think that I may never live to trace
Their shadows with the magic hand of chance;
And when I feel, fair creature of an hour,
That I shall never look upon thee more,
Never have relish in the faery power
Of unreflecting love—then on the shore
Of the wide world I stand alone, and think
Till love and fame to nothingness do sink.

—John Keats
Posted by Patrick Murfin at 10:54 AM No comments: