The Day Chicago Blew Up 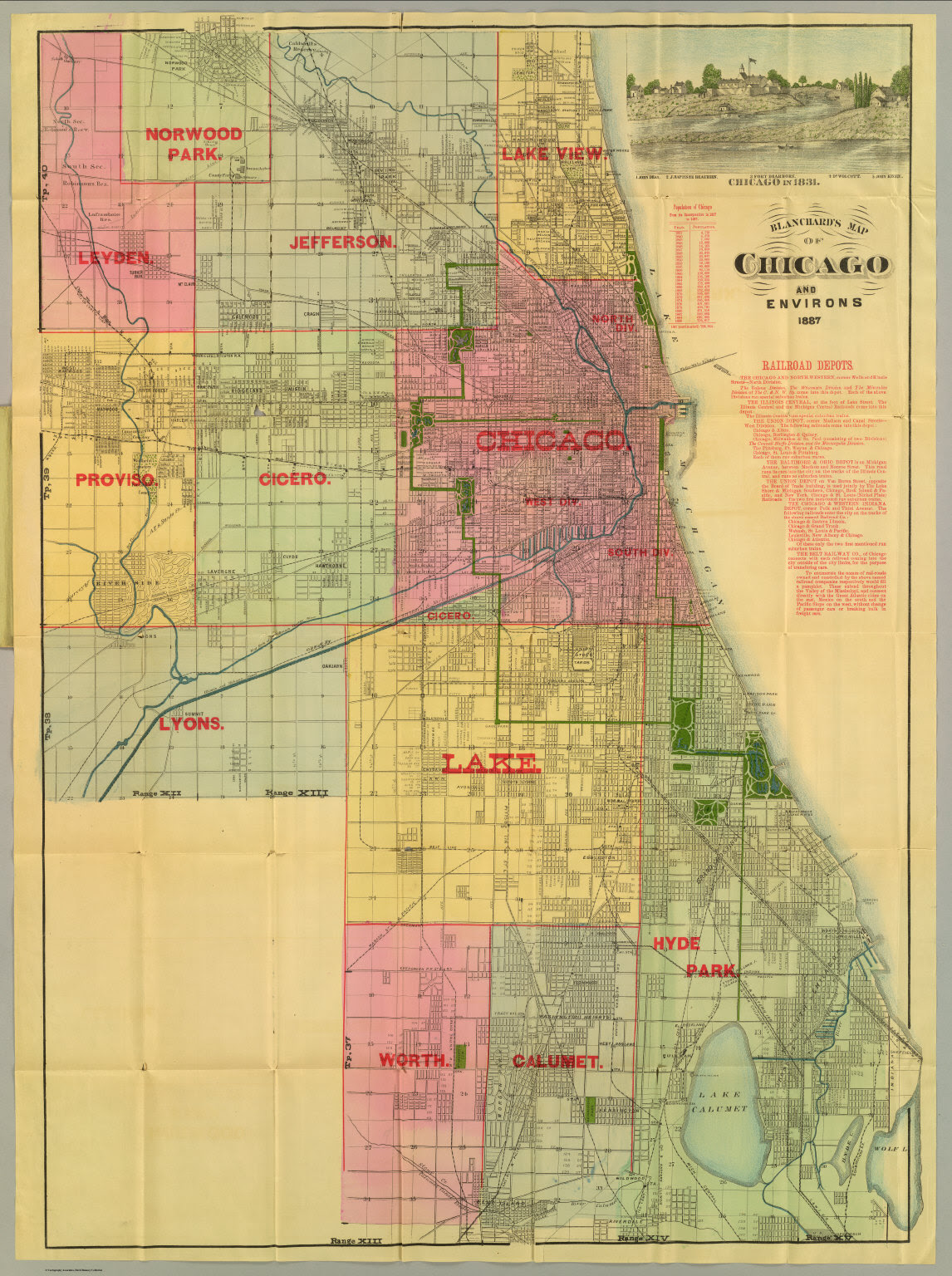 Posted by Patrick Murfin at 2:00 AM No comments: Links to this post


Note—Versions of this post ran in 2010 and 2012.  Seems apt again in the Centennial year of the act that started World War I.  The news this week from Iraq, which was created by the victorious Allies drawing lines in the sand that meant nothing to the peoples those lines boxed in.  We still live with the fallout of that day in Sarajevo every day.

A good case can be made for abandoning the current B.C./A.D.—or B.C.E/C.E.—division of historic time in favor of B.S./A.S.—Before Sarajevo/After Sarajevo.  Certainly the world changed utterly on June 28, 1914 when the Archduke Franz Ferdinand, heir to the throne of the Austro-Hungarian Empire, and his wife, Duchess Sophie of Hohenberg were assassinated in the capital of provincial Bosnia-Herzegovina.

The whole brutal avalanche of modern history turns on the death of a comic-opera princeling at the hands of a fanatic teenage nationalist.  Franz Ferdinand was the nephew of the elderly Austro Hungarian Emperor Franz Joseph and was his designated heir.  He had assumed more and more public ceremonial duties from his uncle.

The Dual Monarchy of Austria and Hungary ruled a multi-ethnic empire in central Europe.  In the late 19th Century it had expanded southward, absorbing some of the former Slavic provinces of the fading Ottoman Empire.  Bosnia and Herzegovina first came under Austrian sway by treaty in 1878 when it occupied and undertook administration of the provinces which remained officially under Ottoman sovereignty.

In 1903 pretense was dropped and the Austro-Hungarian Empire annexed the lands, which were peopled by a volatile mix of ethnic groups and divided by religion—Catholic Croatians, Orthodox Serbs, and Muslim Bosnians among others.  All resented rule from Vienna almost as much as they feared and distrusted each other.

Meanwhile modern Serbia had arisen as an independent kingdom in 1882 and quickly became aggressive and expansionist seeking to unite Orthodox ethnic Serbs in several surrounding states into a Greater Serbia.  It had claims on Bosnia and nearly came to war when the Empire annexed it.

In the 1912-1913 Balkan Wars with its neighbors, Serbia seized Macedonia from the Ottomans and Kosovo from Bulgaria.  Its reckless aggressiveness was made possible by a close alliance with the Orthodox Russian Empire which saw an opportunity to advance its sphere of influence deep into Europe.

The Serbs sought to destabilize the Slavic provinces with secret terrorist societies like the Black Hand and by subsidizing local nationalists groups, like the Young Bosnia movement made up of teenage romantics.

For his part, Franz Ferdinand supported a break from the unyielding rule of his uncle when he would come to power.  He proposed making the Slavic south as a Third Crown in the Empire theoretically brining them into equality with Germanic Austria, and Magyar Hungary.  Under the scheme the provinces would be granted significant self rule and a policy of reconciliation with Serbia would be pursued.

This equally alarmed the Serbs, who felt that such reforms would derail their plans for eventual annexation, the local nationalists, and the Russians whose ambitions would have been checked by their traditional rival empire.

There had been sporadic assassination attempts against various officials, including Emperor Franz Joseph himself in 1910.  Tensions in the region were running high.  The provision of arms and explosives to local groups was managed by the Serbian intelligence services, but may have been carried out either without the knowledge and consent of the King and Prime Minister, or with veneer of separation allowing for “plausible deniability.”

When the Emperor announced he was sending Franz Ferdinand to observe military maneuvers in Bosnia on a date fraught with historical significance to Serb nationalists, Serb diplomats in Vienna evidently did warn officials of the possibility of an attack, but this was written off by the Austrians as a bluff.

On June 28 the assassins were posted at various points along the announced route of a motorcade carrying the Archduke and his wife.  Two conspirators lost nerve as the motorcade passed but the third, Čabrinović, lobbed a bomb at the Archduke’s car which scratched Sophie’s cheek and landed on the pavement on the far side of the car.  Its timed detonator went off under the following car injuring 20 people.

The Archduke dismissed the attempt as the work of a “lunatic” and ordered that the day’s activities be continued, although the caravan sped its way to the next scheduled stop, the Town Hall.  On its way the car passed three other conspirators too quickly for them to act.  It looked like the mission was a failure.

Discouraged one of the men 19 year old, Prinicp, went to a delicatessen for something to eat.  When he emerged he saw Franz Ferdinand’s open car reversing after having taken a wrong turn as it drove past.

The Archduke had decided to visit the wounded from the earlier attack after making a speech at the Town Hall instead of immediately driving out of the city.  He was guarded only by Lieutenant Colonel Count Franz von Harrach standing on the running board of the car.

The car stalled as the driver tried to reverse.  Prinicp was able to get within feet of the car and squeezed off two rounds from his automatic pistol.  The first round passed through the car and caromed into Sophie’s abdomen.  The second struck the Archduke in the neck severing his jugular vein.  Sophie spoke then pitched forward between her husband’s legs.  Franz Ferdinand reportedly said, “Sophie, Sophie! Don't die! Live for our children.”  As the car sped to a hospital he repeated weekly several times, “It is nothing,” before blood filled his throat.  Sophie was dead in the car.  The Archduke died upon reaching the hospital.

Passersby and police quickly seized Prinicp.  Čabrinović had been captured earlier after a failed suicide attempt.  The other conspirators were quickly rounded up as anti-Serb rioting swept the capital.  Eventually all but Mehmedbašić, who managed to escape to Montenegro and then to Serbia, were caught and tried along with others who aided them.  Those over twenty were condemned to death and were either hanged or died in prison.

Princip and others under the age of 20 received the maximum term of 20 years.  Held under harsh conditions, he developed tuberculosis, lost an arm to an infection, and was malnourished.  He died in prison at the age of 23 in April 1918.

In 1917, as a result of negotiations to reach a separate peace between Austria-Hungary and Serbia, the leaders of the Intelligence services that had authorized the assassination were tried and three of them including the chief, Colonel Dragutin Dimitrijević, known by the cover name Apis were convicted of various crimes and executed by firing squad.

But the assassination itself, was soon overshadowed the enormous consequences which seemed to fall mechanically into place.  Within weeks Austria-Hungary issued an ultimatum to Serbia.  Serbia agreed to most of the terms but refused to arrest plotters on the territory or allow the Empire to participate in an investigation.  They began mobilizing their forces with full assurance from Russia that it would honor their treaty of mutual defense.

After a skirmish between boats carrying Serb troops and the Austrians on the Danube, the border between the powers, Austria Hungary mobilized on July 28.  Under the Secret Treaty of 1892 Russia and France were obliged to mobilize their armies if any of the Triple Alliance (Austria-Hungary, Germany, and Italy) mobilized.  By the first of August all major powers except the Italians were mobilized.

On August 1, Germany declared war on Russia and France.  The British declared war on the Germans after they refused to refrain from attacking France through neutral Belgium.  By September much of the world was at war.

The Ottoman Empire entered the war on the side of the Central Powers.  Italy eventually turned its back on its former partners and joined the Allies in 1915.  The United States entered the war in 1917.

The conflict saw carnage on an industrial scale never before imagined.  The introduction of the machine gun, modern high explosives, long range artillery, poison gas, and aerial warfare made the battle field a lethal killing zone in which the maneuvers, charges and counter charges of the 19th Century became impossible.  Massive offensives failed at anything but piling up the dead.

The British alone suffered 57,470 casualties including 19,240 dead on the first day of the Battle of the Somme. Stalemated trench warfare became the norm.  At the end of the war the Allies had total casualties (killed, wounded, and missing) of 22,477,500 of which 5,525,000 were dead.  The losing Central Powers had casualties of 16,403,000 of which 4,386,000 were dead.  These figures do not include millions of civilians on both sides who died of starvation, disease, or military action or the millions more made homeless and displaced.

At war’s end the empires of Austria Hungary, Russia, the Ottomans, and Germany were destroyed.  Russia had withdrawn from the war in 1917 following the ouster of the Tsar, but was soon mired in bloody civil war from which the Bolsheviks would emerge as the masters of a new nation, the Union of Soviet Socialist Republics (USSR).

With old Europe bled dry and financially ruined by the long war, the late arriving upstart the United States emerged as the dominant power in the world.

The League of Nations was founded to avoid future conflicts, but the U.S. despite the pleas of Woodrow Wilson, who conceived the organization, refused to join and it proved itself incapable of managing real international conflict.  Disarmament was tried and failed.

Resentments and humiliations arising from the war would fester, particularly in Germany, leading to another conflagration within a generation.

The Balkans, the powder keg of the war, remains divided by ethnic and religious hostilities and is perpetually on the verge of erupting into more senseless conflict.

Lines drawn on maps dividing the spoils of colonies would have continuing consequences reaching down to the Arab-Israeli conflict and the war in the cobbled together state of Iraq.
Posted by Patrick Murfin at 2:00 AM No comments: Links to this post