Well, December 31 is New Year’s Eve.  It is a designated night of revelry and semi-respectable over-indulgence and general tom foolery.  It is also considered amateur night by bartenders and regular imbibers, many of the latter actually avoid going out because the amateurs are rowdy, annoying, likely to puke on their shoes and frankly dangerous.
Like all holidays and celebrations, New Year’s Eve has its customs.  For those of us of a certain age, that included welcoming the New Year from home with Guy Lombardo and his Royal Canadians first on radio and later on television.  Parents would let kids stay up—or try to stay up—and blow on noisemakers and drink sparkling grape juice at midnight in New York as the band struck up its traditional rendition of Auld Lang Syne.
Lombardo was born in 1902 in London, Ontario, Canada, one of five sons of an immigrant Italian family.  His father was an amateur singer and had each of his sons learn an instrument to accompany him in an informal home band. Guy’s first public performance was at a church party when he was 12 years old. Lombardo and his brothers formed their own orchestra and were playing professionally on both sides of the international border by 1920.
In 1922 Lombardo made his first recordings at the Gennett Studios in Richmond, Indiana.  Soon the orchestra, now dubbed the Royal Canadians, was ensconced in the Roosevelt Grill of New York City’s Roosevelt Hotel.  They played there for more than thirty years.  Like other big city hotel bands, Lombardo’s orchestra was soon making regular live radio broadcasts.  It was a dance band, only lightly touched by jazz.  While contemporaries like Paul Whiteman were adapting their music to the public’s developing taste for Big Band Swing, Lombardo continued to play what he called the Sweetest Music this Side of Heaven.  The band’s immediately recognizable signature sound was a lead saxophone section featuring a wide vibrato.
Lombardo first broadcast a New Years Eve program on CBS Radio on December 31, 1928.  He continued broadcasting from the Roosevelt Room until 1959, and then moved his base to the larger Waldorf Astoria.  In 1959 the New Years Eve program was first aired on CBS Television and continued on that network for 21 years.
After the move to television, the show included coverage from Times Square for the countdown to the Midnight Ball Drop as described first by legendary broadcaster Robert Trout and then Ben Grower.  As soon as the ball would hit the bottom Lombardo would strike up the familiar strains of Auld Lang Syne and the cameras would cut between the proletarian mob in Times Square and the elegant revelers in tuxedos and evening gowns in the hotel ballroom.
Guy Lombardo died in 1977 having done 41 annual New Years broadcasts.  His brothers kept the orchestra together for a while and the show continued on CBS for two more years. 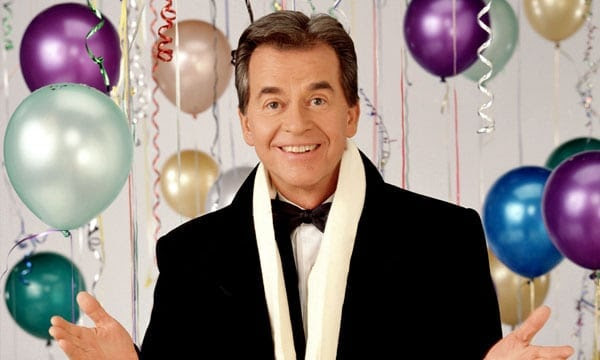 Dick Clark launched his Rockin’ New Years Eve broadcasts from Times Square on December 31, 1972 on NBC.  Lombardo was still the king of the night, but his music was old fashion even for most of his faithful adult listeners.  The first Clark broadcast included per-recorded performances by Three Dog Night, Blood, Sweat & Tears, Helen Reddy and Al Green with cutaways to Clark in a studio overlooking Times Square for the Countdown.
The broadcast moved to ABC after two years and has dominated the night ever since.  After Clark suffered a stroke in 2004 primary hosting duties were performed first by Regis Philbin and then by Ryan Seacrest, best known as the host for American Idol.  Clark returned for appearances on the program, although he remained somewhat impaired by the stroke.
Clark died this year on April 18 at age 82.  The program will continue tonight for at least one more year as Dick Clark’s Rockin’ New Years Eve with Ryan Seacrest.  Tributes to Clark will be salted between the party line up of Carly Rae Jepsen, Flo Rida and Pitbull, Neon Trees, and Taylor Swift, artists so hip and today that I have never heard of most of them.
Other networks and Cable stations have their own New Year’s programming.  CNN’s broadcast has become a cult favorite because comedienne Katy Griffith is expected to say something vulgar and outrageous while newsman Anderson Cooper cringes.
All of that is for the stay at homes.  New Years is not quite the big night out it used to be, but it is still a huge money maker for hotels, nightclubs and bars.  Many cities have midnight fireworks.  A non-alcoholic, family centered events called First Night had developed in many locations as an alternative to the traditional revelry.
I will be home tonight since I don’t have an overnight shift like some years.  I will probably be the only one in the house awake…and I just might miss the actual stroke of midnight if I am playing around on this electronic gizmo.

The Flint Sit-Down Strike—Brazen, Bold and Defiant Changed Everything 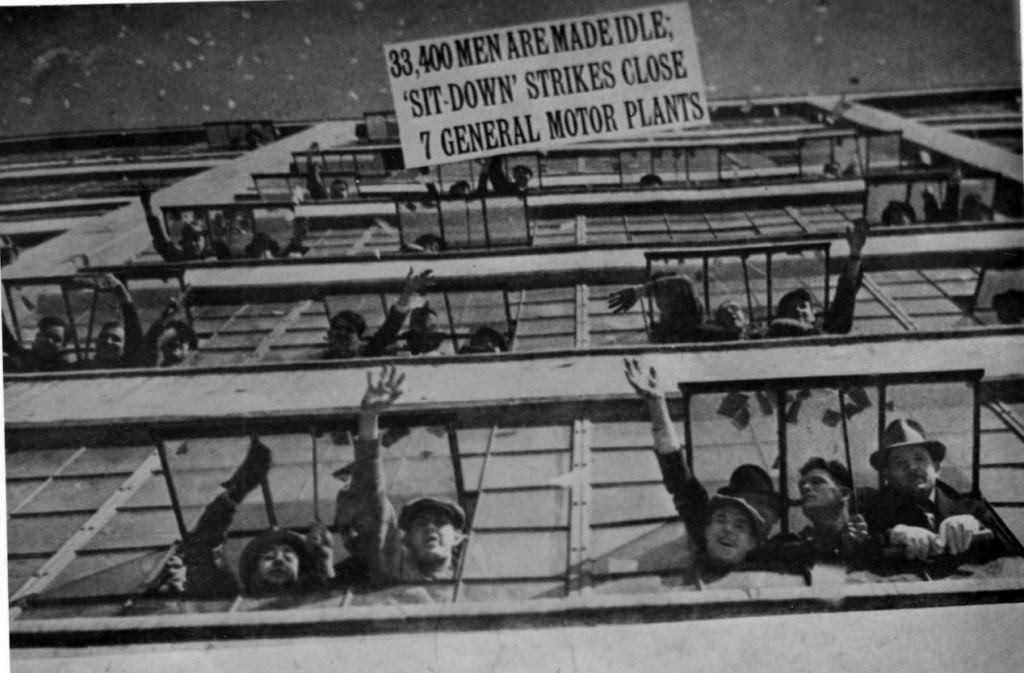 Note:  This calls for a rare two-fer today.

The Flint Sit-Down Strike of 1937 was the great heroic even in the organizing of the American auto industry.  Previous attempts to organize by AFL craft unions and by the Industrial Workers of the World (IWW) had failed to make permanent inroads.  The new United Auto Workers (UAW), an industrial union organized on lines similar the IWW and backed by John L. Lewis’s Congress of Industrial Organizations (CIO), had built scattered locals but had yet made no real headway in organizing the industry.  Many thought the new union would fail.


The union decided to target General Motors for a major organizing drive by striking its two Fisher Body plants in Cleveland, Ohio and Flint, Michigan.  By cutting off the supply of auto bodies, they could quickly shut down all GM production.  Besides, the union had its strongest support at Fisher.  When the company got wind of plans to strike after New Years 1937, it started stripping it essential stamping dies from the Flint plant to be sent to Cleveland.  On December 30 local leaders at the Flint #1 plant called a hasty lunch-hour meeting and decided to launch a sit-down strike, occupying the plant and preventing the dies from being moved.  The IWW had pioneered the sit-down strike at Briggs Auto and Murray Body in 1933, so the workers were aware of the tactic.

As production at all facilities ground to a halt, the company was forced to enter negotiations with John L. Lewis speaking for the UAW since the company refused to be in the same room with UAW leaders.  On February 11 the company signed a one page agreement recognizing the UAW as the bargaining agent of its members for the next six months.  On the strength of his victory the UAW signed up more than 100,000 more GM workers and enforced conditions by local grievance walkouts across the country.  Eventually other automakers, including highly resistant Ford recognized the union.

Posted by Patrick Murfin at 10:56 AM No comments:

Nobody Sings Happy Birthday for the USSR

Today is the birthday of the late, almost universally unlamented Union of Soviet Socialist Republics (USSR) a.k.a the Soviet Union.  On December 30, 1922 a conference of plenipotentiary delegations from the Russian Socialist Federative Soviet Republic (SFSR), the Transcaucasian SFSR, the Ukrainian Soviet Socialist Republic (SSR) and the Byelorussian SSR approved a Treaty of Creation of the USSR and the Declaration of the Creation of the USSR.
The long running Russian Civil War which had erupted in 1917 following the successful Bolshevik Revolution was reduced to mopping up operations in central Asia and virtually over.  The White Armies of Wrangle and others were smashed by the Red Army under Leon Trotsky.  Trotsky then turned his attention on former allies in the Ukraine—the Anarchist Black Army under Nestor Makhno.  After defeating the anarchists in the field, Trotsky secured his hold on the Ukraine with a campaign of mass extermination of its peasant supporters.
Peasants everywhere were protesting the War Communism that expropriated their crops.  When the Sailors of Kronstadt, once hailed as the heroes of the Revolution in 1917, rebelled in support of the peasants in March of 1921, Trotsky sent the Red Army over the ice of the Gulf of Finland to ruthlessly smash the mutineers.  Since then the Red Army had been very efficient in repressing localized peasant uprisings in Tambov, and Siberia.
A war with Poland ended after the Poles defeated the Red Army in the Battle of Warsaw in August of 1920 and the Poles threatened to overwhelm the main units of the southern Red Army, the Soviets sued for peace and both exhausted nations agreed on a boundary splitting the disputed territory in the 1921 Treaty of Riga.
The Western Powers including the United States and Britain had largely withdrawn their intervening forces in the Russian Far East by the end of 1919.  Only the Japanese, who had territorial ambitions, remained after the fall of Vladivostok in October 1922.
So in late 1922 Soviet Russia and its allied states were militarily secure at last.  But they were in deep economic crisis.  Years of war had everywhere destroyed the economy.  Industrial production was only a fifth of what it had been before the October Revolution.  Where actual combat and the mass murder of peasants had not disrupted agricultural production, wide-spread refusal to plant as long as crops were subject to confiscation and two years of drought in much of the most fertile agricultural land had reduced the countries to near famine.
Vladimir IIlyich Lenin, Chairman of the Council of People’s Commissars of the Russian SFSR and leader of the Bolshevik Party moved to consolidate the military successes and essentially re-create much of the Russian Empire as a new federation of Soviet states.  Initially the non-Russian partners in the new USSR gained guarantees to be able to keep ethnic and national identities without forced Russification and the component states had a measure of governmental autonomy within the strictures of an avowedly Marxist state.
The creation of a new country, and a new government with himself at its head as supreme authority gave Lenin the chance to placate peasant opposition with his New Economic Policy (NEP).  This plan had the Soviet State concentrate on the socialization and direction of heavy and basic industry.  Peasants would be allowed to sell their surplus on the open market.  Small business, craftsmen, and some non-essential industrial production would also be market driven.
This plan did help turn around the shattered economy of the new Soviet Union.  But it also meant and ideological break with Trotsky, an advocate of continuing war communism, and the man whose military success made possible the creation of the new country.  The break was not total or immediate, but after Lenin died in 1924, Joseph Stalin, not Trotsky, succeeded as Party head and state leader.  Trotsky was soon in exile in Mexico with a price on his head.
Stalin, an ethnic Georgian, ironically, took greater central control of the various Socialist Republics and returned to the Czarist practice of Russification.  By the mid 1930’s he had purged all of the Old Bolsheviks and transformed what Lenin had envisioned as a quasi-democratic socialist state (via functioning Soviets, not political parties) into a one man dictatorship.
You probably know the rest of the story.
Posted by Patrick Murfin at 2:00 AM No comments: