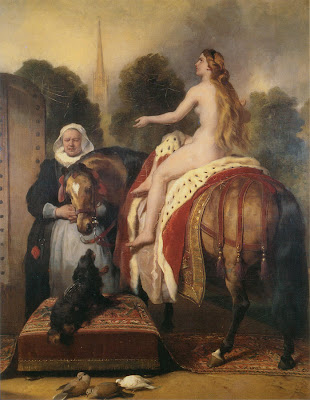 On May 31, 1678 the first Godiva Processional was held in the streets of Coventry commemorating the legendary ride of an Anglo-Saxon noblewoman through the streets of the town some time shortly before 1057.  The parade, featuring a scantily clad, but never actually nude local woman, was a continuing tradition into the 1960’s.  Local authorities hoped to down play Godiva as a symbol of Coventry.  But the lady proved to be far too popular, and the tradition has been re-established as part of an even larger Godiva Festival.

The reality behind the legend is murky.  But there was a real noble woman born before 1040 according to the Doomsday Book completed in 1086 shortly after the woman’s death and the charters to various churches and monasteries to which the Lady and her husband were benefactors.  Godiva is a Latinized version of the Old English name Godgifu or Godgyfu, a then popular moniker meaning Gift of God.

Leofric, Earl of Mercia, reputedly one of the wealthiest land owners in England, took Godiva, a very young widow, as his wife.  Together they became patrons of several monasteries  and made generous gifts of gold jewelry and silver plate to several churches, including St. Paul’s Cathedral in London—the third building of that name which burned in 1088.  It was said that this generosity was at the behest of the very pious Lady.

Of course such larges was expensive.  In order to sustain it, and the lavish lifestyle expected of a leading noble, Leofric raised the rents and taxes on his vast holdings, which included the still new city of Coventry.  Evidently taxes became so extreme that they reduced the residents of the city to want and hunger.

According to the earliest version of the story given in Flores Historiarum by Roger of Wendover about 1230, almost two centuries after the fact, after receiving appeals from the people, Godiva repeatedly begged her husband for relief.  He steadfastly refused.  Finally in exasperation he supposedly told Godiva that he would grant her wish if she would ride the city naked.  Given his wife’s famous piety, he must have considered this a good bet.

But pluck Godiva held him at his word.  In the original tale she rode through the streets still thronging with citizens accompanied by two knights.  The author quoted earlier writings, which, however, have never been found.

Like all good tales, this one gained something in the re-telling.  By the 17th Century the tale has Godiva ordering that all of the citizens of the town remain indoors as she made her ride alone, her long hair partially covering her nakedness.  Still later the story of Tom was added to the tale.  Tom, reportedly a tailor by trade bored a hole in his shutters to espy the Lady as she passed.  But for his shamelessness, he was supposedly struck blind and Godiva’s modesty preserved.

In all versions of the story the repentant Leofric rescinds the hated taxes and Godiva is celebrated as the heroine of the town.

Whether or not any of this actually happened is anybody’s guess.  Kill joy scholars will provide lots of arguments why the tale is spurious, but have no more proof that it is a lie than there is proof that Godiva actually rode.

We do know that Leiofric died in 1057 and Godiva inherited his estates.  She survived the Norman Conquest of 1066 and more remarkably was one of the few Anglo-Saxon nobles—and even fewer women—who retained her lands.  But she died sometime before the records in the Doomsday Book, at which time her lands were in other hands.  She either left no heirs or the rapacious Normans found away to seize the lands.

The story of Lady Godiva has inspired numerous painting, poems, songs, plays, a line of expensive chocolates, and a Technicolor film starring Maureen O’Hara who, alas, was never shown in all of her glory.
Posted by Patrick Murfin at 2:00 AM No comments:

Memorial Day 1937—A Walk in the Sunshine Turns Deadly

Posted by Patrick Murfin at 12:00 AM No comments:

Rhode Island—Better Late to the Party than Never


Always contrarian Rhode Island had stamped its tiny foot and threatened to hold its breath until it turned blue.  No, they would absolutely not ratify the tyrannical document known as the Constitution of the United States.
Sure, the monied interests in big states were for it—Virginia. New York, Pennsylvania. And not-quite-so-big Massachusetts and Connecticut had voted for ratification—but that was all the more reason to be suspicious.  The big bullies were likely to swamp the sovereignty of the pipsqueak.  And Massachusetts had been literally threatening the existence of the Colony since Baptist Roger Williams and his followers escaped the clutches of Puritans and set up a refuge of religious toleration.  Connecticut on the other side was now even more firmly in the hands of the highly orthodox Black Legion of Congregational ministers deeply suspicious of loose religious practices next door which included a thriving Jewish congregation, Quakers, and even—horror of horrors—Catholics.
Rhode Island, heavily dependent economically on its ports and merchants, had been such a hot bed of opposition to heavy handed British taxation and trade restriction policies that a mob of locals had done the faux Indians at the Boston Tea Party and burned the grounded revenue schooner Gaspee to the water line back in 1772.  And it became the first colony, a mouse roaring at a lion, to sever its ties to the mother land, declaring its independence on May 4, 1776, two months before the Continental Congress got around to it.  Its delegates at the Congress, Stephen Hopkins and William Ellery naturally cast Rhode Island’s single vote for Independence.
During the war the British easily occupied Newport, which became a major base Royal Navy Base.  Yet the tiny colony still managed to provide one of the most important and reliable Regiments of the Line for George Washington’s often beleaguered Continental Army.  When the French entered the war as allies, American troops under General John Sullivan, including the all Black 1st Rhode Island Regiment of state militia, in somewhat uneasy cooperation with French forces under Admiral the Comte d'Estaing dislodged the British.
Ruined Newport became the principle base of operations for the French and General Washington took up residence there planning to go on the offensive when their combined forces could be brought to bear in unison.  It was from there that the General launched his long march to Yorktown to trap Lord Cornwallis’s army on a peninsula bottled up by the French fleet.  You probably recall how that worked out.
But having played a critical role in the Revolution, Rhode Island’s post war economy was more devastated than most of the other colonies.  Its merchant traders had trouble re-establishing old trade routes as the British cut off lucrative trade with the sugar and Spice Islands of the Caribbean.  Instead they used their ships to turn increasingly to the Slave Trade and within a few years Rhode Island dominated between 60 to as much as 90% of that trade, tying its economy to the slave holding South.
When the Articles of Confederation failed to provide enough centralized government to retire war debt and facilitate trade, Rhode Island suspicious of the undertaking, never even sent delegates to what became the Constitutional Convention.
In the years following the adoption of the Constitution by the convention in 1787 there was a vigorous national debate aimed at encouraging the former colonies to ratify the Constitution and officially join the new Federal Union.  The eloquent and elegant arguments of James Madison, Alexander Hamilton, and John Jay were countered by dire warnings of tyranny and the re-imposition of monarchy by wily political leaders like Edmund Randolph, George Mason, and New York Governor George Clinton who styled themselves Anti-Federalists.  Rhode Island was firmly in the Anti-Federalist camp.
To assuage those fears, ten new Amendments to the Constitution, collectively known as the Bill of Rights were added to the original document.  Rhode Island, however, was still suspicious.
Rhode Island voters—property owning white men—rejected ratification in a popular referendum on March 27, 1778 by the lopsided margin of 237 to 2,708 after neighboring Massachusetts and Connecticut had affirmed it.
One by one all of the other 12 former colonies fell into line isolating and surrounding the littlest state, which seemed determined to hold on to its own independence.
It is said that no state was forced to ratify the Constitution, but that might be a stretch in the case of Rhode Island.  With her ports becoming havens for smugglers, gunboats began cruising menacingly off shore.  Annual muster days of Massachusetts were marked by drill that hinted that a march against its neighbor might be in the offing.
George Washington had already been elected first President of the United States under the Constitution, and had taken the oath of office in New York City where Congress was also meeting.  A new national government had become a reality.
On May 29, 1790 after a bruising debate in the legislature, members finally ratified the Constitution by the narrowest of margins—34 for to 32 against.
Rhode Island became the last of the “Original 13” to join the union.
Posted by Patrick Murfin at 10:56 AM No comments:

Sojourner Truth in Her Own Real Words