When Props Go Wrong—A Bad Day at the Globe 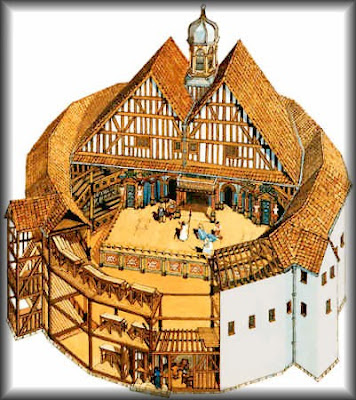 Folks who have been involved in theater, amateur or professional, love to swap yarns about various disasters in front of live audiences.  Ask me sometime about when the set fell on my head in the middle of a Jules Feiffer one act play at Shimer College.

But even the most grizzled theatrical veteran would have a hard time topping what happened to the cast of Henry VIII on June 29, 1613.  During a performance a cannon set off during the performance sparked a fire in the Globe Theater’s thatched roof, burning the structure to the ground.  Fortunately no one was seriously injured, although one actor was said to have suffered an indignity to his pants.

The Globe, of course, was the famous London theater where William Shakespeare had most of his plays produced and where he appeared in many of them as an actor.  Henry VIII is today one of The Bard’s less produced plays, both because of the liberties taken with the well known historical facts of Henry’s reign and because of suspicion that it was either co-authored or heavily tinkered with by another Globe playwright, John Fletcher.

The Globe was constructed from timbers of an earlier venue known simply as The Theater in 1599.  That building was built on leased land and when the lease was up, the landlord claimed the building, which was owned by an association of actors.  To retrieve their property the actors hired a carpenter, Peter Street and joined him in disassembling the building in December of 1598 while the landlord was celebrating Christmas in the country.  The material was hidden until the next summer when it was floated across the Themes and the new theater constructed on marshy ground south of Maiden Lane.

The new building evidently substantially re-created the original, although it may have been enlarged.  The Globe was owned originally by six actors who were shareholders in the theatrical troupe The Lord Chamberlain’s Men.  One of the six was a minority share holder, Will Shakespeare himself.  The building was an open air amphitheater about 100 feet in diameter contained in a building three stories high.  Although described as The Wooden O and portrayed in the only contemporary sketch, by Wenceslas Hollar, archeological evidence now suggests that it may have been a twenty-sided structure.

Three levels of stadium stile boxes protected under and over-hanging thatched roof were built on the interior walls.  Surrounding an apron stage about 43 by 27 feet and raised five feet, was a large open area where groundlings paid a penny to stand and watch performances while their betters lounged in the boxes.  As many as 3000 people could be jammed into the theater, which was one of London’s most popular places of amusement.

The design of the theater was believed to mimic the inn courtyards where traveling theatrical troupes performed in earlier days.

Shakespeare himself at age about 50 seems to have retired from active involvement in the Lord Chamberlain’s Men about the time of the fire, and perhaps because of it.  When a second Globe was erected on the foundation of the first in 1614 he seems to be gone, although his plays continued to be revived as the source of most of the troupe’s material.  He died in his home town of Stratford-upon-Avon in 1616.

The new Globe continued on until something even more deadly than fire befell it—Puritans.  It was closed by order of the Cromwell government in 1642 and probably razed two years later to make way for tenements.

In 1997 Shakespeare’s Globe, a modern reproduction of the first theater, opened a few yards from the original site and regularly produces plays from the Shakespeare cannon.  Three years ago during a cycle of all of the Bard’s history plays Henry III received a rare revival there.  This time the cannon fired safely.  Everyone was relieved.

Posted by Patrick Murfin at 1:52 AM