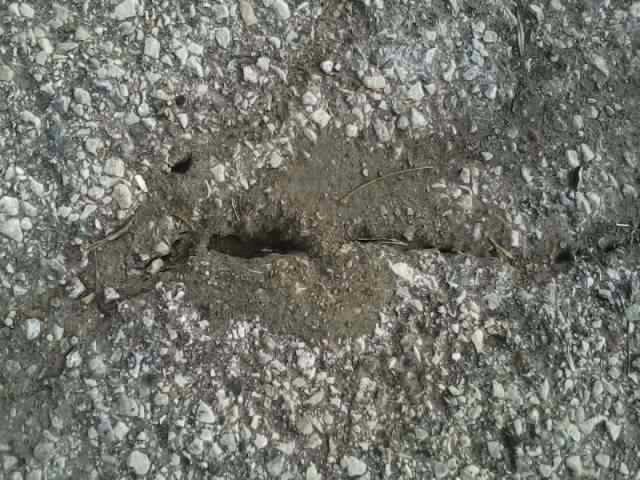 As many have noted, it has been a long, brutal winter across most of the eastern half of the United States.  At this point most of us are desperate for any sign of Spring.  Most years I would be scouting for the pioneer snow lilies and crocus and quite often not be disappointed.   This year they still lay dormant in the frozen ground under layers of snow and ice.
We have had a respite from snow for more than a week, and that’s a relief.  But the damn Polar Vortex plunged us back into temperature that would be Winter lows many years.  So when I accidentally discovered this totally unexpected sign, I clove to it with near religious fervor.
Unfortunately, the snow has returned and we are expecting several fresh inches over the next couple of days.  All of the work I discovered is buried again.  No doubt a temporary setback for the tiny workers….
Harbinger of Spring

There it was in the cold gray morning
as I waited for my bus
at the end of my driveway.

Right there between the round toes
of my heavy yellow winter boots
on the old asphalt only recently
freed of the last ice
in the cracks the cruel season had opened.

I had to look twice to be sure
but yes, yes there it was
the plain and simple evidence
not to be denied.

Thick snow capped by glistening ice
prevented their easy emergence
in the lawn under the dormant trees
so they chose here
where only puny human surface
barred the way
and mere water cleared the way.

The bus pulled up
I scrambled on
and thought about the fresh snow
yet to come.