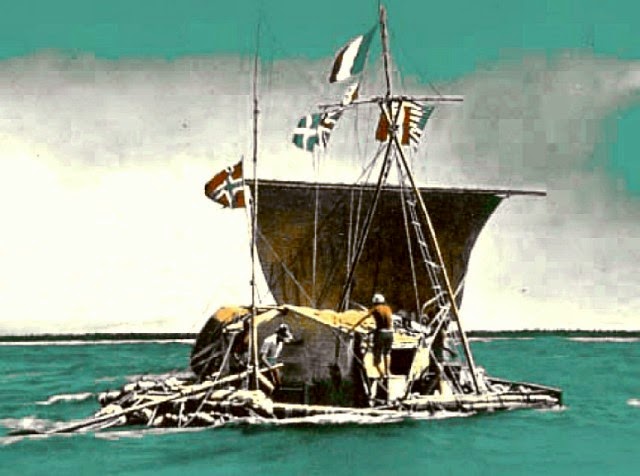 On August 7, 1947 the sailing raft Kon Tiki crashed into a barrier reef off of an uninhabited islet near Raroia Atoll in the Tuamotu Group of French Polynesia. The ship’s Norwegian crew led by explorer Thor Heyerdahl managed to drag the craft safely to the beach.  After a few days of being stranded, they were rescued by Polynesian natives from a near-by island who came to investigate the source of unusual jetsam that had washed up on their shore.  It was the end of a grand adventure that Heyerdahl would chronicle in a world-wide best selling account and in a documentary film of the voyage.
Heyerdahl’s epic nearly 4,000 mile trip across the Pacific from Peru to Polynesia was meant to test his theory that the islands of the South Pacific could have been populated by people from the South American mainland, carried westward by the prevalent Humboldt Current.  To test his theory, Heyerdahl built his raft from local materials using only technology available in the pre-Columbian era and based on observations of native crafts described by Peru’s early Spanish Conquistadores. Heyerdahl named his craft after a variation on the name of the Incan sun god, Viracocha.
The raft was built with nine light weight balsa tree trunks ranging up to 45 feet long and 2 feet in diameter, lashed together with heavy hemp ropes. Balsa cross-pieces 18 feet long and 1 foot in diameter were lashed across the logs at 3 foot intervals to. The bow was clad in hand hewn Pine boards about 1 inch thick and 2 feet wide. Similar boards were wedged between the balsa logs and used as centerboards—retractable keels.
The main mast was made of lengths of mangrove wood lashed together to form an A-frame 29 feet high. The spars were a laminate of wood and reeds. The main sail was 15 by 18 feet on a yard arm of bamboo cane lashed together with hemp. The raft also carried a small top sail and a mizzen-sail mounted at the stern. With a partial deck of split bamboo, a cabin of plaited bamboo 14 feet long and 8 feet wide and nearly 5 feet high was built and roofed with banana leaf thatch. At the stern was a 19 feet long steering oar of mangrove wood, with a blade of fir. No metal was used in the construction.
Local provisions and storage techniques were used, although U.S. Army donated some canned rations for emergencies.  The Kon-Tiki carried 250 liters of water in bamboo tubes, 200 coconuts, sweet potatoes, bottle gourds and other assorted fruit and roots.  For protein the crew relied on—and was successful in obtaining—abundant fish caught along the way including flying fish, dolphin (the fish, not the mammal), yellow fin, bonita, and shark.
The ship also carried radios, watches, metal knives, and a sextant which Heyerdahl said did not compromise the integrity of the experiment since they did not affect the sailing ability of the ship or the sustainability of the crew.


On April 28 Heyerdahl and his crew of 5 were towed aboard the Kon Tiki by a Peruvian Navy tug from the harbor at Callao to a point about 50 miles offshore.  This was to prevent tidal forces from bashing the raft back against the shore.  Heyerdahl maintained that a similar raft could have been towed beyond the danger by teams of canoes.
Once set adrift, the raft caught the Humboldt and was on its way.  On July 30 the crew spotted their first land, the atoll of Puka-Puka, and on August 4 they met inhabitants of Angatau Island in their canoes but could not land safely there.  Three days later they struck the reef that ended the voyage after 3,770 nautical miles in 101 days, at an average speed of 1.5 knots.
The raft was salvaged and eventually brought to Oslo where it is the centerpiece of the Kon-Tiki Museum, one of Norway’s leading tourist attractions.  Heyerdahl, who died in 2002, is still celebrated as one of the nation’s great heroes.
Ironically, although the voyage proved that the journey was possible, ethnologists have long since discounted Heyerdahl’s theory of a South American origin for the Polynesian people.  Their origins are still wrapped in some mystery but the prevailing thought, based on DNA evidence and linguistics is that they originated on Taiwan and spread more or less slowly, depending of which conflicting theories are applied, through Micronesia, the Malay Peninsula, and the islands of Austronesia (including most of modern Indonesia and the Philippines) while mixing with even more ancient local populations in the area.
Scientist are still puzzled by how they navigated regularly across wide expanses of ocean in canoes—not rafts—with no known navigational aids.