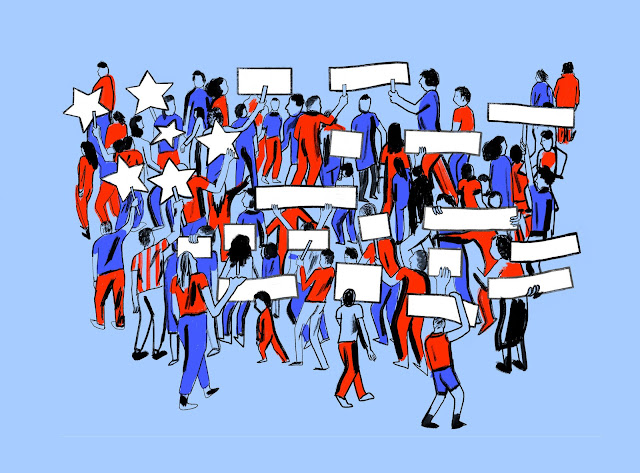 Forget the parades and fireworks--take to the streets and protest this Independence Day.

This is Independence Day weekend, but the United State’s annual birthday party is at best subdued for many of us while others now see it as a hypocritical mockery this year in light of recent developments.  First, two plus years of coronavirus isolation and the anti-science, anti-fact cult that grew up around it has shattered shared community and divided us into hostile tribes unalterably changing us in ways we can barely imagine.

Then we were shocked to our core last year by the January 6 attack on the Capitol.  At first it seemed a chaotic but oddly comical insurrection.  But as investigations have rolled at agonizing pace we realize that it was a genuine attempt at a coup d’état by the former Resident of the Untied States, his lackies, and preciously fringe White Nationalists, Christian Denomonists, and out-right fascists and Neo-Nazis.  We were saved mostly by the stupidity and ineptness of the plotters.

Finally, we have witnessed a successful stealth coup by the new majority of the Supreme Court.  The robed junta was carefully put in place over years by a malevolent Republican Senate majority, and apologists and proceduralists too weak-kneed to stop them.  Their bench was barely warm before they sprang—erasing decades of precedent to erase Roe v. Wade and the equal protection and right to privacy arguments that sustained it.  They quickly turned to attack separation of church and state in a school prayer case and stripped the administration of authority to regulate air quality and attack climate change.

And they will not stop there.  The utterly corrupt Justice Clarence Thomas and conservative politicians including Republican Illinois candidate for Governor Darren Bailey want the reasoning in over-turning Roe be used to attack contraception, marriage equality, and abolition of sodomy laws.  Then Thomas also suggested “overruling these demonstrably erroneous decisions, the question would remain whether other constitutional provisions” protected the rights they established.”  That could conceivably extend even to Loving v. Virginia, the 1967 decision that ironically permitted his own interracial image.  Bailey is on record stating when Roe is overturned “we cannot stop now.”  His agenda extends to the complete eradication of all Federal, state, and local gun regulation. 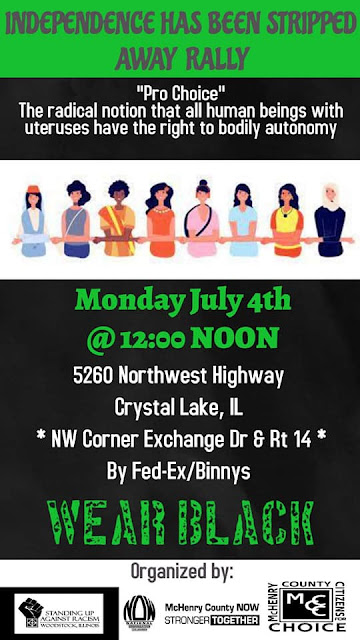 I'll be here on the Fourth of July.  Where will you be?


No wonder so many of us are depressed.  But we are also enraged and motivated to fight back.  On the Fourth of July I will be late to our family’s annual gathering of the clan at the Murfin Estate which celebrates on only the holiday but my wife Kathy Brady-Murfin’s birthday on July 5 and Grandson #1 Nicholas Bailey’s birthday later in the month.  Instead, come rain or come shine I will be joining McHenry County NOW, McHenry County Citizens for Choice (MCCC), Standing Up Against Racism Woodstock, and members of my Tree of Life Unitarian Universalist Congregation in a roadside vigil/protest along Route 14 in Crystal Lake.  We are asked to wear black instead of star spangled patriotic togs.  Thousands of similar protests will be held all holiday weekend around the country. 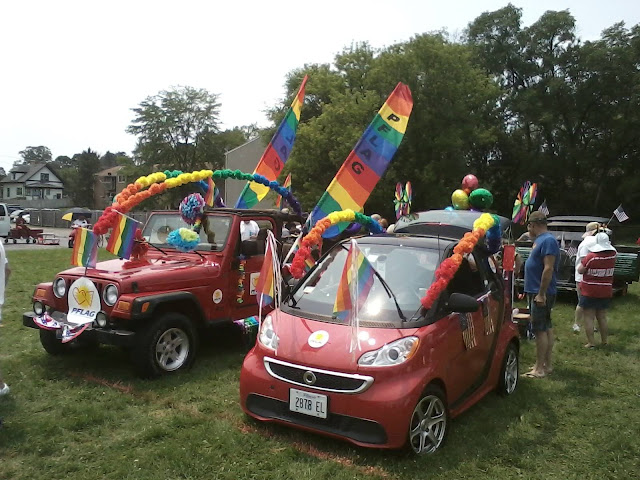 Tree of Life members joining PFLAG for the Crystal Lake Independence Day parade.  This is the head of a large contingent in the 2015 parade.  This year protest will mingle with celebration.


And tomorrow, July 3 Tree of Lifers will join PFLAG McHenry County in the annual Crystal Lake Independence Day Parade, the longest and largest in the county.  We will not be silent there, either.

We also need to harness the outrage to turn out in a record-breaking non-presidential year numbers to oust Republicans at every level.  This will be no time for ideological purity or protest votes.  Vote Blue as if your life depends on it.  It very well might. 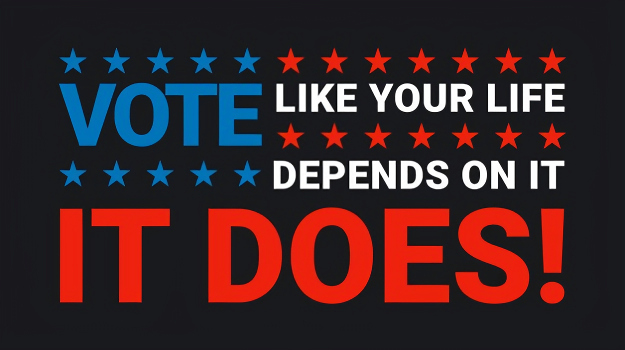 Last year I was asked to come up with a chalice lighting for July 4th zoom worship service of the Tree of Life Unitarian Congregation. The poem I came up with was inspired by that and our conflicted feelings over the Founders, Declaration of Independence, White privilege, and patriotic symbolism.

It seems even more apt this year. 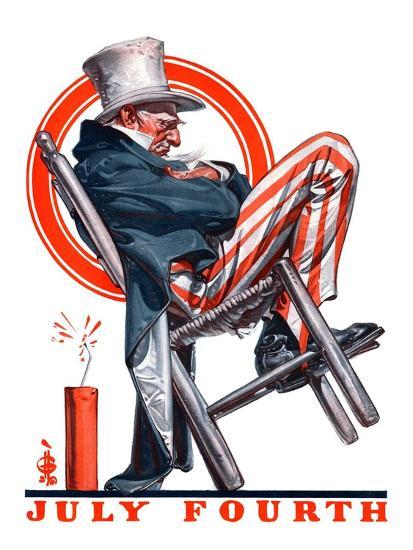 
The prompt for the poem was taken from a 1924 cover of the Saturday Evening Post by artist J.C. Leyendecker.

As an allegorical figure you have seen better days,

But as a shrewd Yankee trader ready to sell some

at least you were truer to the spirit of America

than some goddess Columbia in a Liberty Cap

or crowned Lady in a Harbor offering

Like the Flag that bedazzles your swallow tail suit,

high top hat, and pantaloons you have become

an empty symbol of chest-thumping jingoism

devoid of the promises of that Declaration

we are supposed to celebrate today

or any of the ringing rhetoric

that promised us something different

We never quite lived up to all that hokum and hurrah

no matter what a show we made of that banner

and frankly of you.

No wonder you needed a nap.

but that M-80 lit under your tilted chair

should wake you up at last.

The enemies of Liberty are afoot.

It is time to wake up defend