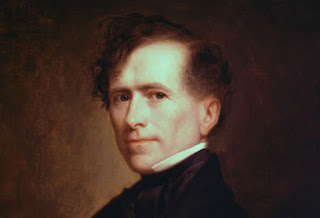 It's President’s Day, the Rodney Dangerfield of holidays.  It gets no respect.  And for good reason.  The country used to celebrate George Washington’s Birthday, a noble bow to the Father of Our Country.  A lot of us, those of us in states that never seceded from the Union any way, also partied for the Great Emancipator.  Two dudes who deserve respect and their pictures on coins, bill, and stamps.

But businesses with union contracts calling for the observance of Federal Holidays and school districts were pissed off about having to close twice in February and part with that holiday pay.  So they convinced Congress a few years ago to make it a two-fer-one deal.  Congress thought even better of it, what with Republicans eyeing a Ronald Reagan Day and some Democrats countering with recognition of Franklin Delano Roosevelt.  So they threw in the whole kit ‘n caboodle and made Presidents Day, a holiday that celebrated every great man—and every mope—to hold office with perfect equality.

Stores may use dancing Washingtons and Lincolns in their President’s Day sale ads, but if you squint William Henry Harrison, Zachary Taylor, John Tyler, Millard Fillmore, James Buchanan, and that herd of interchangeable bearded Republicans between Lincoln and Teddy Roosevelt are doing the Can-Can in the far background.

So let’s really celebrate this year.  Let hear it for Franklin Pierce.

Franklin who? You might ask.  Why the 14th President of the United States, that’s who.  The noble son of New Hampshire who was certainly the handsomest man ever elected to that office.

Although born in a log cabin in 1804, Pierce came from reputable Yankee stock.  His father was a Revolutionary War hero and two time Democratic-Republican governor of the Granite State.

He was educated at Philips Exeter Academy and then attended Bowden College in Maine where he became the lifelong friend of Nathaniel Hawthorne.  In fact one of Pierce’s most notable accomplishments as President was keeping Hawthorne employed in plumb political appointments thus saving his family from virtual starvation.

After graduation, Pierce studied law in Massachusetts the returned to Concord, New Hampshire to start practicing in 1824.  Gregarious and charming, Pierce won friends and clients and was soon highly successful as a lawyer and rising in Democratic politics.  He served in the New Hampshire House of Representatives from 1828 to ’33 while his father was Governor and served as Speaker for the last two years.  Then he was elected to the U.S. Congress and at 27 years old was the youngest serving Representative.

During this time he married the beautiful but shy and frail daughter of the former President of Bowdin College.  He was devoted to the former Jane Appleton.  Highly religious, she abhorred her husband’s political career—and his heavy drinking.  She became an outspoken teetotaler.  Despite their differences, they made a striking couple and had three children together.  Their first son, named for his father, died in infancy and their second survived only four years before falling victim to a typhoid epidemic.  Jane regarded these tragedies as punishment for her husband’s political career.

In 1836 the New Hampshire General Court elected Pierce to the U.S. Senate.  He served as a Democrat without much distinction until he gave into his wife’s pleas and resigned in 1842.  He returned to a lucrative private law practice in Concord, and then was appointed Federal Attorney from 1845-47.

With the outbreak of the Mexican War, generally unpopular in New England, Pierce enlisted as a Colonel of Volunteers.  Once in Mexico, he was promoted, through political clout with the Polk Administration as brigadier of 1st Brigade, 3rd Division and joined Winfield Scott’s army in time for the Battle of Contreras where he was seriously wounded in the leg in a fall from his horse.  The next day while leading his troops in the Battle of Churubusco he fainted from pain and had to be carried off the field.  After recovery, he resumed command for the rest of the campaign and returned to Concord a middling war hero.

In 1852 the Democrats meeting in Baltimore were deadlocked between four candidates for President--Stephen A. Douglas, William L. Marcy, James Buchanan and Lewis Cass each with significant regional support.  The party was split on the expansion of slavery, but tied to place itself above “agitation” on the issue.  The platform called for support of the controversial Kansas-Nebraska Act. None of the candidates could win a majority.  On the 35th ballot Pierce’s name was put up as a possible compromise—a northern man with southern sympathies and a record as a war hero.  He finally the won nomination on the 49th ballot, probably the most obscure man ever to win a major party nomination.

If the Democrats were in disarray that year, the Whigs were busy dying after the disastrous accidental presidency of John Tyler.  Their great men—Daniel Webster and Henry Clay—refused to get out of each other’s way.  Instead the party nominated war hero Winfield Scott.  But Scott was a pompous campaigner and as an anti-slavery Virginian lost the support of the south.

In the general election Old Fuss and Feathers was humiliated at the hand of his former subordinate.  Pierce won the electoral votes 27 of the 31 states, including Scott’s home state of Virginia.

He was, at 48 years old, then the youngest man ever elected to the office.

But tragedy struck before his inauguration.  On his way to Washington the train carrying the President elect and his family derailed.  His wife was injured and his last surviving son, 11 year old Benjamin was decapitated before his eyes.  The tragedy unhinged both Pierce and his wife, who blamed the death on her husband’s career.

Once in Washington Jane withdrew from her husband and official duties as hostess.  Pierce spent most of the first year in office alone in a darkened room drinking himself insensible.  When his Vice President, former Alabama Senator Rufus King died just thirty days after inauguration , Pierce’s friends fearing for his sanity and ability to serve his turn fretted that he had no clear successor.

Pierce eventually recovered enough to perform his duties, although he continued to drink heavily.  He steadfastly supported the Kansas Nebraska Act, including the hated provisions of the Fugitive Slave act and generally pursued a policy of conciliation with the South while decrying the “agitation” of Northern Abolitionists.  His closest adviser and political supporter was his Secretary of War, Jefferson Davis.

His policies led to a decade of virtual civil war in Bloody Kansas between slave state settlers and their Missouri Border Ruffian allies, and northern Free Soil settlers supported by Northern Abolitionists.
At every juncture where there was sectional conflict, Pierce sided with the South on the justification that it was necessary to preserve the Union.

By the end of his four year presidency his party was splintered sectionaly.  No one wanted a second Pierce term.  The party finally settled on his Secretary of State James Buchanan, another Doughface Democrat—a Northerner with Southern principles.

Pierce retired to New Hampshire to try and win back the affection of his alienated wife.  They traveled abroad.  When they returned home, Pierce began speaking publicly against “abolitionist agitation.”  He was briefly considered for re-nomination in 1860 but declined and the Democrats split among three sectional candidates.

During the war he was an outspoken opponent and critic of the Lincoln Administration and the President’s war aims.  When Secretary of State William Seward accused him of being a member of the seditious secret Knights of the Golden Circle—a militant Copperhead group flirting with allying themselves with the Confederacy in armed rebellion in Ohio and border states.—Pierce demanded he present proof in what became an embarrassing scandal for both men.

At the end of the war when Jefferson Davis’s  papers were captured, very friendly letters from Pierce to the Confederate President were found—so friendly many thought they verged on treason.

Pierce’s wife Jane had died in 1863.  And now his reputation was in tatters.  He was drinking more than ever.  On October 8, 1869 he died in Concord of cirrhosis of the liver.

With no close heirs save a nephew, he divided his estate with generous gifts to several friends, including a provision for the children of old pal Nathaniel Hawthorne.

He is unanimously included in all lists of the worst presidents in American History.

Happy Presidents Day, Mr. Pierce.  This one’s for you.
Posted by Patrick Murfin at 8:45 AM