Wyoming—Making Big Plans for the Apocalypse 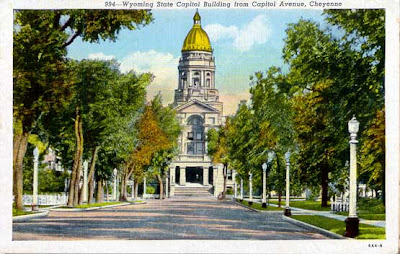 They may have to dredge Crow Creek.  That’s the mighty stream that runs, or stumbles, through my old home town, Cheyenne, Wyoming.  After a good winter snow run off it can run three feet deep and a couple of yards widest.  By August it is usually as dry as a crater on the Moon.  But once, back in 1985, it flash flooded when the city was deluged with six inches of rain in four hours.  Along with the even more arid Dry Creek across town, four foot walls of water rushed own the arroyos, over flowing the banks.  Twelve people were killed, 70 injured and there was tens of millions of dollars in property damage.

Republican members of the state legislature must evidently secretly believe global warming is real, despite the official party line of rejection.   Why else would they vote to study the possibility of the state acquiring its own aircraft carrier?  Where else but Crow Creek would deeply landlocked Wyoming float its very own navy?

Lest you think I am making this up, let me cite this item from the Casper Star-Tribune:

State representatives on Friday advanced legislation to launch a study into what Wyoming should do in the event of a complete economic or political collapse in the United States.

House Bill 85 passed on first reading by a voice vote. It would create a state-run government continuity task force, which would study and prepare Wyoming for potential catastrophes, from disruptions in food and energy supplies to a complete meltdown of the federal government.

The task force would look at the feasibility of Wyoming issuing its own alternative currency, if needed. And House members approved an amendment Friday by state Rep. Kermit Brown, R-Laramie, to have the task force also examine conditions under which Wyoming would need to implement its own military draft, raise a standing army, and acquire strike aircraft and an aircraft carrier.

The bill’s sponsor, state Rep. David Miller, R-Riverton, has said he doesn’t anticipate any major crises hitting America anytime soon. But with the national debt exceeding $15 trillion and protest movements growing around the country, Miller said Wyoming — which has a comparatively good economy and sound state finances — needs to make sure it’s protected should any unexpected emergency hit the U.S.

Several House members spoke in favor of the legislation, saying there was no harm in preparing for the worst.

“I don’t think there’s anyone in this room today what would come up here and say that this country is in good shape, that the world is stable and in good shape — because that is clearly not the case,” state Rep. Lorraine Quarberg, R-Thermopolis, said. “To put your head in the sand and think that nothing bed’s going to happen, and that we have no obligation to the citizens of the state of Wyoming to at least have the discussion, is not healthy.”

Wyoming has just over half a million hearty residents—the fewest citizens of any state—spread out over 97,814 square miles.  Just the ticket for self-sufficiency in the event of the catastrophic collapse of the United States Government.  One senses that in the fevered imaginations of some legislators, they rather hope that event might be looming and are quite prepared to help make it happen.

There has always been a strutting “hate the dam gub’ment” strain among certain Wyomingites, who like to imagine themselves as rugged individualists, cowboys if you will.  This is belied by the fact that more than three quarters of the land in the state belongs to the Feds and that the state reaps a deep harvest of federal dollars and one in five residents owes employment directly or indirectly to the government.

This just takes its most common expression, blustering belligerence to even the mildest hints of modest gun control legislation, to a new level.  It is “you will have to pry my gun from my cold, dead hands” amped up on steroids.

The most amazing thing is that no one in the legislature evidently even batted an eye at the assertion that it would be a good use of taxpayer money to inquire about obtaining an aircraft carrier.  And they will be mystified as to why the rest of the nation is doubled over, rolling on the floor with laughter at the idea.