Barack Obama and the Black Hat 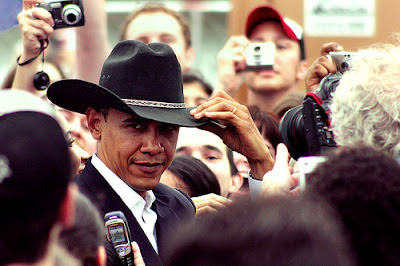 Note:  Probably the most popular post ever on this blog in its early days on LiveJournal was posted during the 2008 Presidential Primary season.  Yet it was only tangentially about politics.  It was about…cowboy hats.  The reason for the popularity was the many links to great photos of old time movie and TV cowboys.  I seldom include many links any more in posts—it’s too much work and I have grown lazy.  But check them out here.

The other day I spied a photo of Barack Obama campaigning in Texas in a cowboy hat.  Like most tall, thin men, he looked good in one.  Of course that didn’t stop a lot good natured—and some decidedly not good natured—mockery around the web.

Obama was just trying on the quaint native peasant costume, a time honored tradition among politicians.  A particularly famous photo of Calvin Coolidge in a Sioux war bonnet comes to mind.  Obama didn’t let the brouhaha that erupted after old photos wearing a white turban and tribal robes in Kenya dissuade him from going Texan.

Cowboy hats carry with them a lot a symbolism.  Maybe even more than some suspect.  Put George W. in one and you get the immediate queasy feeling that he just snuck his daddy’s guns out of the closet and is off to see what he can shoot in the brush.  Ronald Regan instantly invoked the folksy hero of B Westerns (think Cattle Queen of Montana) and the host of low budget TV oaters (Death Valley Days.)  The homespun cowpoke image helped voters overcome misgivings about his conservative economic policy and hawkish foreign policy.  Lyndon Johnson’s familiar Open Road Stetson reinforced the image of a Texas wheeler-dealer—think ruthless cattle baron or an oil wildcatter with an eye out for the main chance.

What got my attention was Obama’s choice of a black hat.  It seemed symbolic of his breaking free of many of the old constrains and preconceptions that have separated Americans in to hostile camps.  Let me tell you why.

Way back when I was a boy in Cheyenne, Wyoming, I used to run home from school every day to watch Pete Smythe, Mayor of fictional East Tin Cup, Colorado on Denver’s KOA-TV introduce old two reel Westerns—Tom Mix, Hoot Gibson, Tim McCoy, Ken Maynard, Gene Autry, Tex Ritter, Wild Bill Elliott et.al.  A great deal of my moral development came from absorbing these films and the wisdom ol’ Pete dispensed in his introductions.  I remember with perfect clarity the day Pete explained the Rule of the Hat--“Good guys wear white hats.  Bad guys wear black ones.”  I was skeptical at first.  But film after film showed me it was true.  The hero almost invariably wore a big white hat.

Oh, there were rare exceptions.  Bill Boyd as Hopalong Cassidy was decked out in black from his 10 Gallon Hat to his boots—but he balanced that by riding the whitest horse in the oaters.  Later on TV Hugh O’Brien as Wyatt Earp would wear a black hat.  But he wasn’t really a cowboy—he was a lawman.  And he was outfitted in the long black frock coat, brocaded vest, and string tie that that had been the trademarks of the saloon keeper villains of the old two reelers.  I didn’t realize it when I was watching that show at the time, but the costume was a hint at the real Earp’s somewhat shady reputation as a faro dealer and part time pimp.

More recently, black cowboy hats have come into vogue among those who fancy themselves rebels and outsiders—think NASCAR’S late Dale Earnhardt or country music bad boys like Waylon Jennings or Hank Williams, Jr.  But these are just good guys pretending to be bad.  The black hat works because it is ironic and because in the back of our minds we still associate a black hat with a bad guy.

As a Black man running for President he has already smashed stereo types and expectations.  As an already iconic Good Guy himself and the oracle of Hope and empowerment (Yes We Can!) he can don a black hat and casually demolish another.