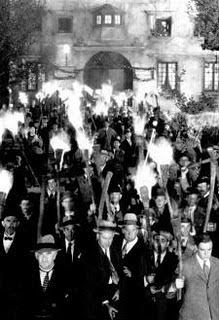 Dennis Anderson, Congressional candidate in the 14th District and Amanda Howland, State Senate candidate in the 24th District are just some of a parade of Democratic Party hopefuls who will take to the stump in the Gazebo on Woodstock Square Thursday evening at 6:30 for   an old fashion torchlight rally.

The program will feature an all too rare opportunity to hear directly from candidates for Congress, the state legislature, and the McHenry County Board.

“Stark lines have been drawn between our two parties from the race for the White House on down as never before,” according to event coordinator and program moderator Patrick Murfin.  “Democrats on all levels represent fundamental American values of fairness, compassion, equality, and above all, common sense.  Republicans have marginalized themselves on the fringe.  People in McHenry Country are paying attention and old habits are being broken.”

People are encouraged to bring flashlights, to illuminate the torchlight rally.

Several candidates will also be setting up tables with literature and have yard signs available.

The program is sponsored by the Democratic Party of McHenry County and is free to the public.