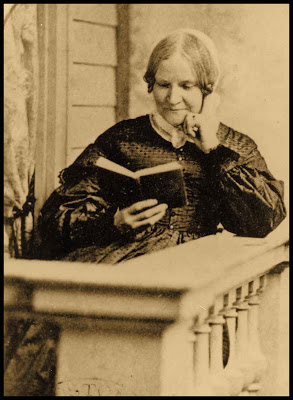 Lydia Maria Child died in her Wayland, Massachusetts home at age on October 20, 1880.  Chances are you never heard of her.  But she may have been the first American woman to earn her living as a professional writer and became one of the country’s leading social reform advocates.  If you remember her at all, it is probably because she penned a classic holiday song still sung by school children.
Child was born on February 11, 1802 in Medford, Massachusetts.  Her father Convers Francis was a businessman and banker and a stern conventional Calvinist.  The youngest of three children, she received a conventional education at a local dame school and a female academy.  She was especially close to her oldest brother, Convers Jr. who encouraged her inquisitive mind and guided her reading.  She was bereft when he left home to attend Harvard when she was 9.
When her mother died, her father sent her to live with a recently married older sister in Maine where she was expected to act as a housekeeper and eventually a nurse for the children.  The curious Maria continued reading and when time allowed explored the area.  A visit to the nearby Penobscot settlement began a lifelong interest in and respect of Native Americans.
In 1819 young Maria took a teaching position in Gardiner, Maine.  She dabbled in mystic Swedenborgism but wrote her brother that “I am more in danger of wrecking on the rocks of skepticism than of standing on the shoals of fanaticism. I am apt to regard a system of religion as I do any other beautiful theory…”
Maria returned to Massachusetts in 1821 a dutifully took communion and became a member of the orthodox First Parish in Medford.  But she soon moved in with her brother Covers, now a Unitarian minister at First Parish in Watertown and attended his church regularly.  He encouraged her reading and gave her a magazine article that suggested that New England history might be fertile ground for an aspiring novelist.
With Convers’ encouragement she dashed off her first novel Hobomok: A Tale of Early Times which was published in 1824 and is credited with being the one of first historical novels published in the United States coming out just months after James Fenimore Cooper’s The Pioneers, first of the Leatherstocking series.  Like Cooper’s book, it was also noted for its sympathetic portrayal of Native Americans.  From that time forward he dedicated herself to writing.
But it was not yet a profession that could support her.  The same year she opened her own school in Watertown and continued teach for the next four years.  In 1826 she founded Juvenile Miscellany, the first monthly periodical for children issued in the country.
In 1826 Maria married Boston lawyer David Lee Child, an idealistic reformer who introduced her to the wide and tumultuous world of the Hub City’s intellectuals, activists, and especially radical abolitionists.
Maria officially joined a conventional Congregational church but left it and began to attend worship with William Ellery Channing, although she despaired of his reluctance to fully embrace abolitionism.  She was soon a frequent participant in Margaret Fuller’s “conversations” held at Elizabeth Peabody’s North Street bookstore.  She became Fuller’s close friend and collaborator.
Despite her loving relationship with her husband, he was frequently drawn in to improvident schemes or in trouble for his activism.  Twice he was jailed for debt.  The family had to rely largely on Maria’s earnings as a writer.  Inspired by her own experience she published The Frugal Housewife, a guide to making do with little.  It was a success and kept the family fed.
In 1831 Maria became an associate of the nation’s most notorious abolitionist, William Lloyd Garrison.  She became a leader of the Boston Female Anti-Slavery Society and contributed to Garrison’s newspaper The Liberator.  Although an ardent supporter of women’s rights, she came to believe that the subjugation of women could not take place until the still worse evil of slavery was ended.
From 1832 to '35 Child published five volumes of the Ladies Family Library featuring short biographies exemplifying feminine virtues for her growing audience of middle class women.  The books were popular and selling well until her unvarnished militancy was aired in her 1833 book An Appeal in Favor of that Class of Americans Called Africans.  Her radicalism alienated much of her audience.  Sales of her books for women plummeted, as did circulation of her magazine, which she was forced to suspend in 1834.
Defiant, Child turned her attention full time to the cause of abolitionism.  In 1839 she was elected to the Executive Committee of the American Anti-Slavery Society.  The following year she was appointed editor of the Society’s influential publication, the National Anti-Slavery Standard and moved to New York City to assume her duties.  Her husband David, although nominally named her co-editor, remained in Massachusetts to work on a scheme to introduce sugar beet cultivation to the state to end dependence on slave harvested sugar cane.  Under New York law, Maria was able for the first time to separate her finances from those of her husband.

Her tenure at the Standard was a success and circulation grew with her policy of appealing to the whole family.  She continued her service on the board of American Anti-Slavery Society where she collaborated with Lucretia Mott and Maria Weston Chapman.  She wrote anti-slavery fiction as a way of broadening the appeal of the movement including the short stories The Quadroons in 1842 and Slavery's Pleasant Homes: A Faithful Sketch 1843.
But in 1842 she broke with Garrison over his advocacy of refusing to vote as a protest against union with slaveholders, his advocacy of violence, and organizational infighting.  She felt these positions would alienate her broadened readership base.  She resigned her editorship and turned her back for a while on the organized anti-slavery movement.  She vowed to work only with feminist and suffrage organizations.
Child remained in New York as a freelance writer for sometime before returning to reunite with her husband.  Together they cared for her ailing father in Wayland.  The old house became her home for most of the rest of her life.
In the 1850’s escalating tensions over the Fugitive Slave Act and the attack on her personal friend Senator Charles Sumner on the floor of the Senate re-invigorated her opposition to slavery and caused her to re-evaluate her previous absolute opposition to violence.  Outrages like the murderous raid of pro-slavery forces on Lawrence Kansas caused her to become more sympathetic to violence.  Her poem The Kansas Emigrants drew widespread attention.
She was sympathetic to John Brown after his arrest for trying to lead a slave insurrection with his raid at Harpers’ Ferry.  She personally knew some of the prominent Bostonians including Rev. Theodore Parker who had financed the raid.  Child wrote letters of in support of Brown to Virginia Governor Henry A. Wise and published the exchange which was widely praised in the North and condemned in the South.
During the same decade she turned her attention to religion.  She had long been a seeker and although most frequently worshiped with the Unitarians, she found their practice sometimes cold and unsatisfying.  She plunged into a study of both the evolution of Christianity and of world religion.  She published her three volume The Progress of Religious Ideas through Successive Ages in 1854.  She hoped to remove “the superstitious rubbish from the sublime morality of Christ.”  The closely researched books were respectful of the contributions of many religions to the development of a refined human morality.  The books were highly praised, but sold poorly.  He close friend the Rev. Thomas Wentworth Higginson said of one volume that it was “too learned for a popular book and too popular for a learned one.”
As war clouds gathered, Child left Wayland for Boston where there work that needed to be done in the winter of 1860-61.  She was back home when the war broke out and dedicated herself to charity work supporting contrabands—the slaves that fell into Union hands or escaped their masters by fleeing into the protection of the Army.  Concerned with their future, she edited the Freedmen’s Book, a reading primer for former slaves.
With the end of the war Child returned to earlier passions. The plight of Native Americans grabbed her attention and she authored a series of pamphlets on the issue.  Most influential was An Appeal for the Indians in 1868 which called upon government officials and religious leaders, to bring justice to the tribes, including the right to retain their lands, speak their languages, and practice their religions.  The pamphlet helped encourage the establishment of the Board of Indian Commissioners and the subsequent more slightly more lenient peace policy of the Ulysses S. Grant administration.
Child also resumed her work on behalf of women’s suffrage where she was a leader of a faction that demanded that free Black men get the vote first, or in conjunction with women.  She was a founder of the Massachusetts Woman Suffrage Association.
In 1867 she was attracted to the Free Religious Association (FRA), a semi-impendent group of Unitarian ministers and congregations which were challenging the remnants of orthodoxy.  She attended worship at meetings on her frequent trips to Boston.  In 1878 she published Aspirations of the World, her own personal eclectic Bible made up of quotations culled from the religions of the world.
Child’s husband David died in 1874.  Freed of his debts and schemes, she was for the first time in her life able to save money from her continuing active work as a popular writer.  She used her new found wealth to give generously to causes in which she believed.
When Child died in 1880, her funeral was conducted in her Wayland parlor.  The eulogy was given by her frequent collaborator on abolition, women’s suffrage, and Indian rights, Wendell Phillips.  She was buried next to her much loved but improvident husband David.  They left no children.
Oh, did I forget to mention that seasonal song which is now just about the only thing Child is remembered for?  The words to the Thanksgiving song Over the River and Through the Woods were originally published in 1844 as a poem A Boy's Thanksgiving Day in Volume II of Child’s collection Flowers for Children.  I could find no attribution for who set the popular poem to the now familiar tune.