My Odd Tree With the Dinner Plate Leaves 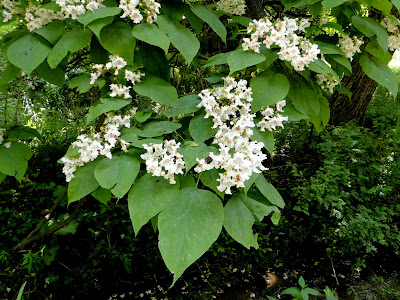 My wife Kathy and I enjoy watching birds at a feeder and bath outside the kitchen window of our extremely humble abode in Crystal Lake, Illinois.
The great American elms that once shaded that side yard succumbed to disease and were removed more than twenty years ago leaving the yard sun-parched on hot summer afternoons.  So we wanted to plant a tree near the feeder to help attract birds and eventually shade the house.
One Sunday maybe ten years ago I came home with a stick barely thicker than my thumb and maybe two feet tall.  It was allegedly a catalpa tree.  We planted that stick a few feet from the bird feeder.  And we waited.
After the first year when just two brave twigs emerged from the stick, you could actually see the damn thing grow day by day.
I like to bend a branch down and show visitors the two or three sets of new leaves nestling like Russian dolls inside the wreath of earlier growth at the tip of a green shoot which has grown several inches in the less than a month since buds first appeared after a late cool spring.  The tree could grow another foot or more in all directions this year before the season ends.
The tree now looms much higher than the peak of the roof of our ranch house, its numerous branches thick with heart shaped leaves the size of a dinner plates, its trunk the girth of a sturdy elephant’s leg.   It shades the kitchen window now in the fierce late afternoon sun as I watch the birds from that window.
Right now the tree is getting ready to burst with clusters of white flowers.   In the fall it will develop long thin, bean like pods which will cling to the bare tree over the winter finally dropping one by with the new growth next spring.
A lot of folks think of catalpas as virtual weed trees because of the litter of dropped pods and because those enormous leaves do not get brightly colored in the fall, but slowly fade to an ugly olive green, wither and drop when decent trees are over it.  A lot of folks think that those things make it a hassle and a nuisance.
Most people prefer the slow growing oak or maple.  They have their charms as well.  Planting an oak is ticket into the future, a legacy.  Its eventual shade may not be as intense, but it will spread further.  The sturdy trunk will withstand gales that would break or uproot the catalpa.  And, if left undisturbed, it will stand for centuries after stump of the short-lived catalpa has rotted away.
But I gain enormous satisfaction and a peculiar connection to nature watching that odd, weed of a tree.
So what will it be—oak or catalpa?  Fortunately we don’t have to choose, there’s room for both.  But if I was thinking of my grandchildren, I should plant an acorn—and soon.