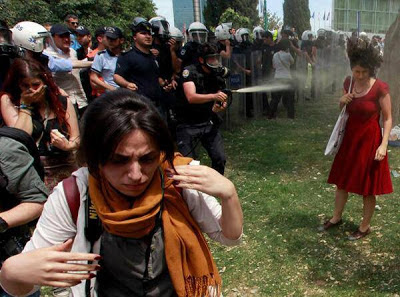 Massive street protests have become common over the past few years from the various color coded rebellions that led to the down fall of remnant Communist regimes in Eastern Europe and the former USSR, the Arab Spring that led to the downfall of the Egyptian government and threatened conservative regimes, austerity protests across Europe, a mass student rebellion in Canada, and on a lesser scale the big marches and encampments of the Occupy Movement in this country.

Except were the rebellions seem somehow to service American foreign policy interests, the U.S. press shows us almost nothing of this.  Yet those of us who are interested in the world have found ways to watch the power of people taking control of their own lives via the blog-o-sphere and social media.  The images are powerful, but after a while tend to blend together.  We become almost blasé about yet another million or so people taking to the streets.

The recent events in Turkey, a westernized Islamic country about which American know little, however, have galvanized our attention.  What started out as a modest protest against taking Taksim Square, the last green space in the center of Istanbul, for redevelopment as an upscale shopping mall.  But massive attacks on the demonstrators using what looks like the most intense and sustained use of tear gas ever unleashed accompanied by a new wrinkle—tear gas mixed in the spray of powerful water cannons—and traditional charges by mounted police and cops with truncheons,  quickly inspired a popular insurrection.

In four days it has spread from Istanbul to the capital of Ankara and to at least 27 major cities in all corners of Turkey.  It began with secularized, urban middle class and students but has quickly grown to include the labor movement which today announced plans for a general strike, and even to the government’s base of moderate Islamists.  Unlike other movements in the region, more radical Islamic elements seem isolated and unsure what to do.

Violence has escalated.  Thousands upon thousands have been injured by gas, gas projectiles, beatings, and trampling.  The government acknowledges the arrests of more than 1,700, a figure that is probably ridiculously low.  Much of the street fighting goes on at night out of the vision of western media.  Use of lethal live fire and heavy armor has not been confirmed.  But stunning photo shows a literal river of blood washing down an Istanbul street, stark evidence that atrocities have been committed.  Yet the rebellion only grows.

Photos and videos have provided images of the uprising that stun an move us—an attractive, defiant young woman in a fashionable red dress, Italian shoes and shoulder bag standing alone just feet in front of police taking as stream of gas directly in the face,  a section of street littered from gutter to gutter with thousands of spent gas canisters —most made in the U.S.A.,  the fog of gas boiling nearly to roof lines,  young men emerging from the cloud, a Whirling Dervish in black and a gas mask dancing defiance.

All bring back memories of other iconic images from China twenty-four years ago.