Much Ado About a Baby 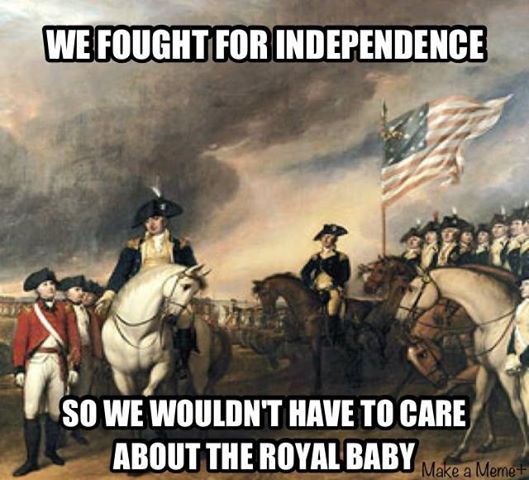 Forget all of those al Qaeda big wigs, the ones the White House bragged about when originally bagged, who were busted out of Abu Ghraib Prison in a made in Hollywood rescue operation.  Forget about a mere Pope swarmed by crowds in Rio de Janerio in what looked like an old Fiat from a seedy car rental outfit.  Forget poor Detroit, its bones about to be picked clean and sold to the lowest bidder to be ground up for chicken feed.  Forget it all.
Apparently the only thing of importance that happened on Monday was that Mrs. Mountbatten, an elderly World War II veteran (truck driver) living on the public doll was presented a fine baby great grandson.
OK, I get it that the old gal styles herself as Queen Elizabeth the Second, by the Grace of God Queen of this Realm and of Her other Realms and Territories, Head of the Commonwealth, Defender of the Faith.  She’s held a steady sinecure she will not give up since 1953, likes matching pastel broad brimmed hats, suits, and purses, and is awfully fond of Corgis.
The baby’s mum is a pretty and pleasant young woman out of central casting named  Kate who is hitched to a balding gent who might get his Grandmother’s job if she would ever do the decent thing and pack it in and giver her aging son a crack at it first.  Then, sometime near the dawning of the 22nd Century if everyone lives as long as the old woman—whose own mother lasted until she was 10—the unsuspecting newborn might get it in turn.
Some Brits are reportedly excited that the Hanover/Windsor Dynasty is secure for generations.  These Brits style themselves monarchists, or in the opinion of many members of the embarrassingly lower classes, Twits.
On this side of the ocean, where we fought to wars to get rid of those parasites and keep them out, you would think that the birth would be of no particular interest.  You would be wrong.  Apparently huge swaths of the tabloid purchasing American public, including those who grab their news from the wire racks at Wal-Mart while dressed in leopard print outfits six sizes too small, love the Royal family as much as the Kardasians and Honey Boo-Boo rolled into one.  So do generations of young girls infected at birth with Disneyprincesitis, an incurable affliction.
With a keen eye for their core demographic, the American media went all out with coverage of the birth, which consisted mostly of pictures of crowds outside a rather run-down looking hospital building, yammering British talking heads, and frequent clips of the baby’s dead grandmother.  And no one could go more than three minutes without breathlessly reporting that the babe is The Future King of England.
Meaning no ill will to the little nipper, that is a hell of a thing to wish on any kid.  Better he should grow up to muck out sewers, or in deference to the family tradition of government employment, a junior clerk in a minor ministry.
When I think of the future King of England, I don’t think of current Prince in Waiting or baby’s father, a noted model of comic opera uniforms.  I think of an old song my Wobbly pals and I used to sing well after midnight when the table at Glascott’s Groggery in Chicago was strewn with empty pitchers of beers and littered with shot glasses.  As the hour of closing would be nearing, our throats raw from hours of singing old Union ballads, Irish Rebel songs, anarchist ditties, and obscure folk songs, someone would invariable start the following song, which we would bellow loudly enough to rattle the windows at Buckingham Palace.  It went like this.

Sung to the tune of The Irish Washerwoman

Oh, the minstrels sing of an English King
Of many long years ago,
He ruled his land with an iron hand,
Though his mind was weak and slow.
He loved to hunt the royal stag,
Around the royal wood,
But better by far he loved to sit,
And pound the royal pud.

Chorus
He was lousy and dirty and covered in fleas,
The hair on his balls hung down to his knees,
And he had his women in twos and threes.
God bless the Bastard King of England.

Now the Queen of Spain was an amorous Jane,
And a sprightly wench was she,
She longed to fool with the royal tool,
From far across the sea.
So she sent a royal message,
With a royal messenger,
To invite the King of England down,
To spend the night with her.

Now ‘ol’ Philip of France he heard by chance,
Within his royal court,
And he swore, “She loves my rival best,
Because my tool is short,”
So he hurried off to Spain,
Where he did the deed again,
To give the Queen a dose of clap,
To pass it on to the Bastard King of England.

When news of this foul deed was heard,
Within the royal halls,
The King he swore by the royal whore,
He’d have to Frenchman's balls.
He offered half the royal purse,
And a piece of the Queen Hortense,
To any British subject,
Who could do the King of France.

So the noble Duke of Middlesex,
He took himself to France,
He swore he was a fairy,
So the king let drop his pants,
Then on Philip’s dong he slipped a throng,
Leaped on his horse and galloped along,
Dragging the Frenchman back,
To merry old England.

When the returned to London town,
Within fair England’s shores,
Because of the ride King Philip’s pride,
Was stretched a yard or more.
And all the whores in silken drawers,
Came down to London town,
And shouted round the battlements,
“To hell with the British Crown.”

And Philip alone usurped the throne,
His scepter was his royal bone,
With which he ditched the Bastard King of England.

Well, just maybe a little historical error crept into the song.  But we liked its spirit.  Consider it yer lullaby, kid.
Posted by Patrick Murfin at 2:33 AM