One Very Fine Sunday at My Church 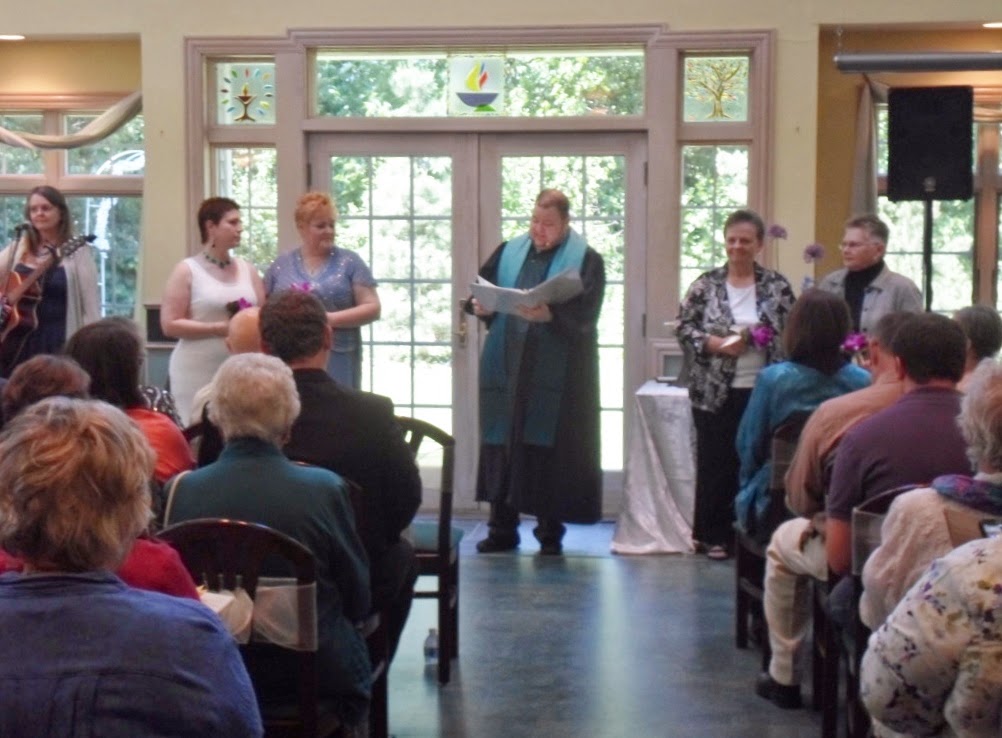 Triumphant.  It can be a word with unpleasant over tones.  Kind of an I-win-you-lose-stick-it-where-the-sun-don’t shine gloat.  But I don’t mean it that way.  I don’t want to stick my thumb in any eye or rub salt into the wounds of those who stood in the way.  I only want to shout joy to the rooftops.
The eight women who stood up at the Tree of Life Unitarian Universalist Congregation in McHenry yesterday had triumphed.  As the Rev. Sean Parker Dennison pointed out, their collective 81 years of love and commitment to each other could finally be validated by the State of Illinois.  And that love and commitment could be shared at the joint wedding ceremony hosted by the congregation Sunday morning.
All of the friends and family of each couple had triumphed, too.  The ones that had not only accepted, but had treasured.
The Congregation, which had declared it support of Marriage Equality a decade ago, which had long embraced some of the couples and other members of the BGLT when finding a safe church home in McHenry County was challenging, which had publicly Stood on the Side of Love in the campaign to make Marriage Equality come to Illinois triumphed.  Helping to bring this event to reality was our finest hour.
The whole wider community—even those who professed horror at the possibility whether they know it now or not—has triumphed.  The scattered parts have been gathered into the whole, the circle of love extended, the value of family, real family, has been affirmed.
And judging from the rare and stunningly perfect day in June, the Lord God Jehovah himself or however you choose to name and characterize The Greater—was mightily pleased.
I would like to let the four remarkable couples speak for themselves.  From the introductions they wrote which were included in the Order of Service 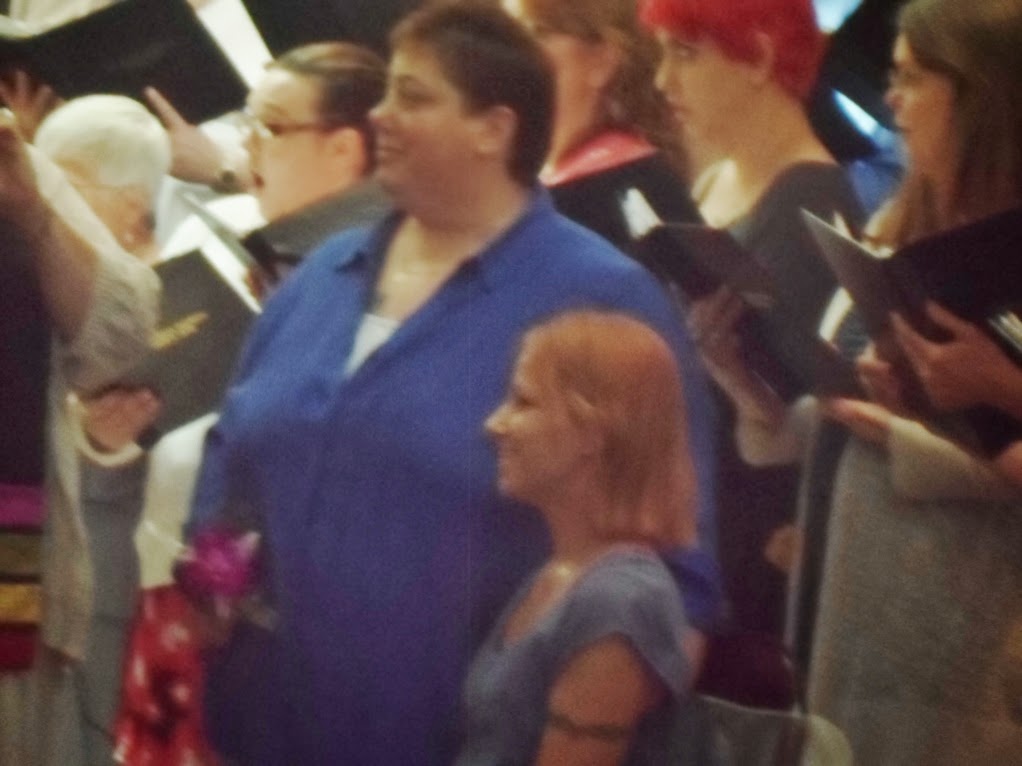 Jodi Kuperman and Megan Meyer met 10 years ago through a friend. They moved together months later as friends so Jodi could help Megan with her kids. It took them few years to become a couple but in that time they had many ups and downs. They have 3 wonderful children; Amanda 22 who is married to Tim who is proudly serving our county in the army; Matthew who is 11and our boy boy; and Hailey who is 9 and a mini Megan.  Amanda blessed us with a beautiful granddaughter Elsie Anne who grandma and bubby love to death! They feel they are the ying to the other’s yang! 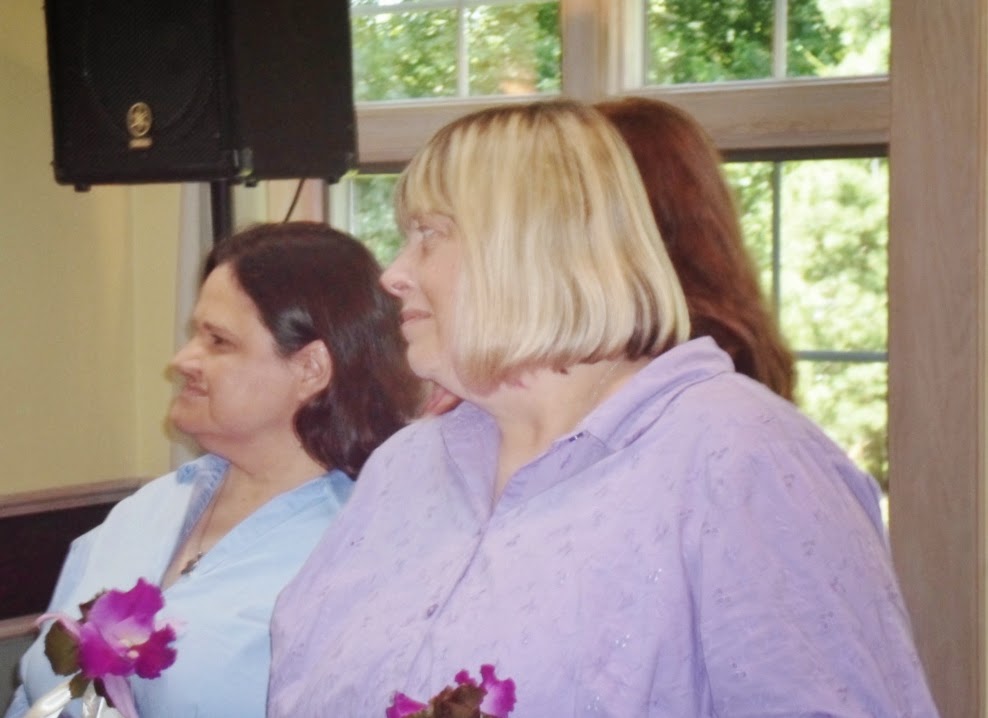 Theresa Castino lives in Round Lake with her partner of 22 years, Mary Kuhn, and their 3 furry kids (Samson the cat, Cassidy the floppy mutt, and Frankie the wonder pug). Theresa works as a web content manager. Her interests include photography, writing, football, and music. Mary’s hobbies include traveling, reading, and gardening. She currently words for Automated Health Systems as a customer service rep enrolling people in state health plans. 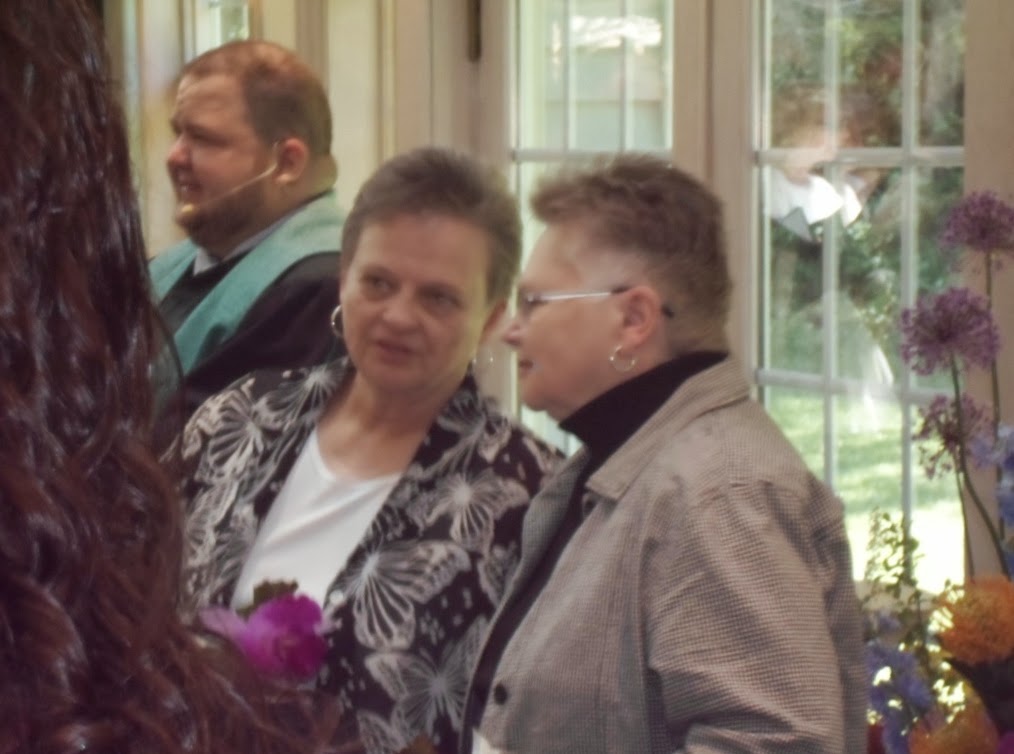 Gale (Harris) and Deb (Glaubke) were introduced by friends at a party in April 1988.  By the end of May they had moved in together and have been a couple for 26 years.  Their first commitment ceremony was in 1989, after a year of “making sure” they were compatible, by hanging wallpaper together and building aviaries in the living room.  The latter idea turned out to be not so excellent, as the 28 finches, four cockatiels, 2 love birds, and one red lori joined in conversation any time the television or record player came on. Both Gale and Deb have worked in human services for most of their careers. Deb worked as an on-call crisis counselor for 16 years, and Gale is a cognitive psychotherapist with decades of experience. In 2012 they were the 40th same sex couple to join in a civil union, and were the first couple at the Woodstock Government Building in Woodstock to apply for a marriage license on June 1.  They have lived in Woodstock for 15 years, and are co-founders of Gallery in the Garden, an annual art show which raises money for local charities. Currently their household consists of themselves, five dogs and four cats—none of which is invited to the wedding. 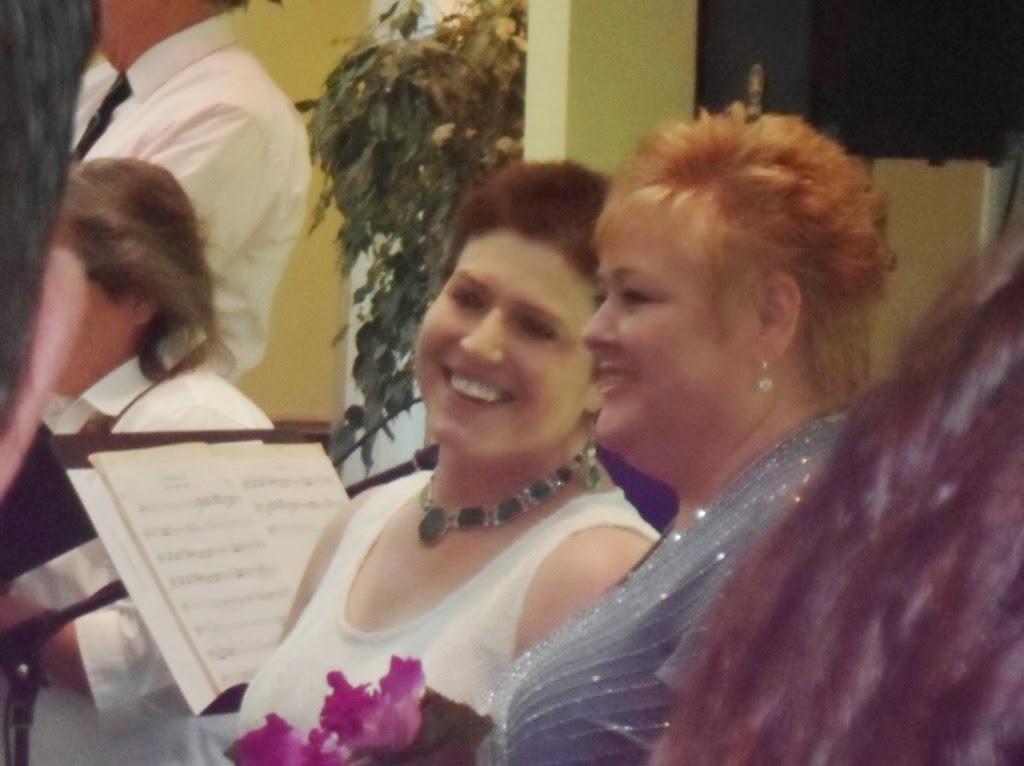 Mary Fleming and Barb Oesterle have been attending this church since 1989. They have been an awesome duo who taught OWL and youth group for many years. They support one another and play on each other's strengths.  Most of all, they love to laugh and have fun. Mary Ellen and Barb have been together for 25 years. Mary recently made the comment that many other couples are getting divorced at their age and they are getting married!  Barb will be changing her last name to Fleming.

Finally, I would like to express my pride in the community of our Congregation which came together to put on a fabulous wedding and reception.  The volunteer efforts were Herculean and undertaken with a cheerfulness and joy that was inspirational.
To quote Rev. Sean, “Shalom, Ashev, Blessed Be.  Gentle people, go in peace.”

Posted by Patrick Murfin at 1:27 PM