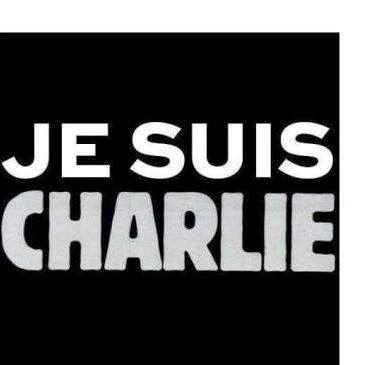 The news of yesterday’s killings in Paris was heartbreaking.  It naturally strikes a special nerve will all of us around the world who speak our own minds, who express unpopular, even outrageous opinions.  A quick look at covers from the satirical magazine Charlie Hebdo quickly reveals that it was no mild Mad or even The Onion.  It was biting with an almost savage glee.  And when a target was picked—Islamic extremists—for example it was gleeful in poking its thumb in the eye, rubbing salt in the wound.  The editors and staff positively strutted in the face of a previous bombing and constant death threats.  I would have called them childish.  I would have protested the broad brush they chose to use.
But I would always—always—defended their right to have their say.  It’s what I do.
And now they are dead.  I grieve for them.  I cry for justice.
But the blood was still dripping in Paris when certain familiar voices were raised… 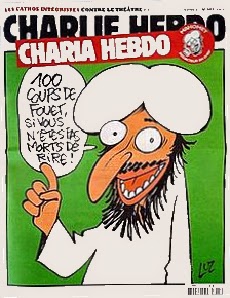 Je Suis Charlie
After the attack on Charlie Hebdo January 7, 2014

It is always the same.

I stand over the spreading pool of blood
grieving, shaking my fist in anger,
seeking justice not revenge for the
the villagers of Mai Lai,
children of Sandy Hook,
the Afghan wedding party,
the Gaza hospital patients,
a Black boy on cold asphalt,
you know the drill.

And you loom suddenly before me
with your sneer and leer,
kicking aside the bodies,
pointing your finger
and demanding
Where was your voice —
at Pol Pot’s killing fields,
the Munich Olympic Village,
Ruby Ridge and Wacco,
9/11,
the drive-by at the South Side playground,
As if those deaths trumped
the ones at my feet—
or excused them.
As if the killers you hate
were more heinous and despicable
than those who shed this blood.
As if I did not mourn those
or protest the perpetrators.
You just assumed in your bigoted rage
that I did not
and that I, like you, put value
only on certain lives.

Here you are again today.

The blood of today’s crumpled bodies
mixes with ink,
spreads across scattered cartoons.

I weep for Liberty and yes—
those once human lumps
of shredded flesh.

You care not whit for these dead,
if you had known who they were,
you would have hated them,
cheeky Frogs and Commies
everyone of them.

But their killers made a claim for Allah
and that made them your favorite
current object of revile.

Before I can raise my tear streaked face,
you stand there and accuse me
of cowardly silence.

Yet here I am, unsilent,
my voice raised against fanaticism,
unreason and bigotry,
for freedom,
yea even the right to be an asshole.

But that is not enough.

I must, you say, if I love justice,
hold every man, woman, or child
who kneels five times a day
to equal account for these murders
and make them all pay
thousands of times over
with their own blood.
I see and condemn a sliver of fanatics,
you see whole races equally guilty.

There seems to be not much difference
between you and these killers,
except maybe degree or,
perhaps, time.

Posted by Patrick Murfin at 4:37 AM