The Big Blow Up—A Preview of Things to Come?


It has been a hell of a year for fire in the West, a hell of a year.  Last week several fires burned out of control in California, burning homes, threatening entire communities, and stretching firefighting capacity to the limit.  In the worst fire season in at least 30 years more than 7.1 million acres across the West have been blackened and fires blazing as I type this account for more than a million of that total with as much as three month still ahead for a typical fire season.  30,000 firefighters are engaged and exhausted.  At least 200 troops have been called up and are undergoing emergency training and firefighters from Canada are expected to arrive soon.  Additional help may be called for from as far away as Australia and New Zealand.
After years of epic drought, high winds in some areas have contributed to actual fire storms explosively scorching mile after mile of parched timber and undergrowth.  Today’s TV newscasts dramatic footage of a firenado—a raging funnel cloud of fire.  And then came the news that no one wants to hear.

This is the fifth consecutive year of epic fires.  Already strained firefighting resources have been further challenged after a Forest Service policy to allow fires in the most remote areas to burn themselves out unless they began to threaten populated areas was scrapped in 2012 in response to scathing criticism following Arizona fires the year before.  The Forest Service returned to a traditional policy of trying to fight and put out every blaze, no matter how remote or small despite the huge logistic difficulties, strain on fire fighting resources, and expense.
Conservationists  know that fires are a natural part of the life cycle of the largely pine, spruce, and fir western forests and that letting dense underbrush, which would be cleared by fast moving natural fires, build up creates reservoirs of fuel for even more devastating fires.
It is an old argument.  One which was once before settled in favor of aggressive attack after the worst fire, in terms of total acreage consumed in American history.
In the lore of the West it is still spoken of in hushed tones of awe and wonder.  It was called, officially, The Great Fire of 1910.   Unofficially it is called The Big Blow Up.

Hot and dry conditions and a buildup of underbrush from earlier years left the forests of eastern Washington, the Idaho Panhandle, and western Montana south of Glacier National Park a tinderbox.  Scores of small fires were ignited daily, mostly from burning cinders from the smokestacks of the steam locomotives that crisscrossed the region, lighting, and backfires meant to contain larger blazes.  Most would die out or be able to be contained by local firefighters.  By late August more than a 1000 such blazes were burning in the region.
But on August 20 a cold front moved in and with it near hurricane force winds.  Within hours scores of small fires were whipped up and merged into one enormous blaze that was spreading with unprecedented speed.
Several towns were immediately threatened.  The infant Forest Service, only 5 years old, was powerless to fight a fire on that scale with their small numbers and the seasonal fire fighters at its disposal.  President William Howard Taft ordered Army troops, including members of the Black 25th Infantry Regiment from Fort Wright in Spokane, Washington to join the effort.

Railroads scrambled to bring manpower and equipment into the region which was nearly devoid of roads and to evacuate those in the path of danger.  Several trains from Wallace, Idaho brought refugees to Spokane, Washington and Missoula, Montana.
Some trains barely made it away.  More than 1000 refugees on a train from Avery, Idaho found themselves hurtling over a burning trestle and the train had to take refuge in a long tunnel as the firestorm raged over the mountain.
Smoke from the mammoth fire reached all the way to New York State.  Hundreds of miles out into the Pacific Ocean, freighters could not navigate by the stars because the towering columns of smoke from the blaze obliterated half the sky. 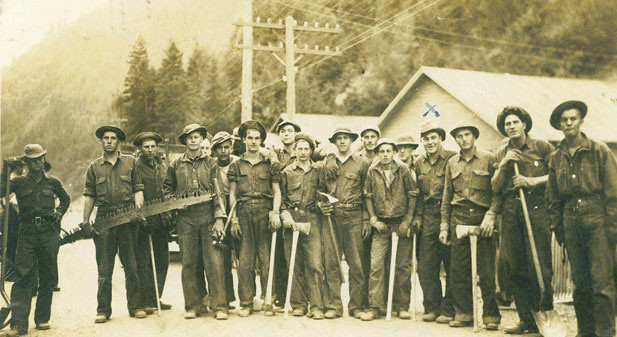 The towns of Falcon and Gradforks in Idaho and De Borgia, Haugan, Henderson, Taft, and Tuscor in Montana were wiped out.  So was more than a third of Wallace, Idaho, the principle city of the Coeur d’Alene silver-mining district.   In Wallace alone property damage totaled more than one million dollars. Burke, Kellogg, Murray, and Osburn in Idaho also suffered major damage.
The fire spread over private forest land, mining districts, high country cattle ranches, and all or parts of the Bitterroot, Cabinet, Clearwater, Coeur d'Alene, Flathead, Kaniksu, Kootenai, Lewis and Clark, Lolo, and St. Joe National Forests.
Considering the vast size of the blaze and the rapidity with which it spread, it is amazing that only 87 deaths have been confirmed, although more victims probably died in isolated cabins or fleeing and never found.
73 of the dead were firefighters.  Crews were caught when wind whipped fire through the tree tops and leaped canyons and other barriers or when their own back fires got away from them.  An entire 28 man Lost Crew died along Seltzer Creek near Avery.  It was two years before their remains were dug up from shallow graves where they fell and packed out by mule train for re-internment at a firefighters’ grave yard at St. Maries.


There were some legendary acts of heroism—most notably veteran Forest Ranger Ed Pulaski, who was commanding a crew near Wallace.  Seeing the flames sweeping down the side of a mountain at them, Pulaski shepherded his men into an abandoned mine shaft and ordered them to lie down.  After several minutes of terror, smoke began to enter the shaft and at least one man tried to make a run for it.  Pulaski coolly drew his pistol and threatened to shoot anyone who tried to leave.  All were overcome by unconsciousness.  Five of the 40 man crew and two horses died in the cave, but the rest survived.
On August 21, less than 48 hours after turning into a grand conflagration, a second cold front moved in, this one with heavy rains which quenched the fires to smoldering ruins.  Crews spent weeks mopping up hot spots.
In the fire’s aftermath, the Forest Service was beefed up and it adopted its policy of fighting every fire.  To make that possible, the Service began the construction of Ranger Station towers on remote mountain tops across the west to keep a keen eye out for any tell-tale smoke on the horizon.   And Forest Rangers became a new kind of American folk hero.

Posted by Patrick Murfin at 3:54 AM