Two Anniversaries—A Bomb and a Boon

Two incredibly significant anniversaries are being observed today, each ending in a fat round zero which draws extra attention to them.  They couldn’t be more different, but each commemorated event shaped and changed forever the world in which we live.  Seventy years ago on August 6, 1945 the Atomic Bomb was first used as a weapon of war, exploding with unprecedented devastation over Hiroshima, Japan and ushering in decades of fear known as the Nuclear Age.  Twenty years later President Lyndon B. Johnson signed the Voting Rights Act of 1965 ushering in an era of increased Black political participation and power particularly in the states of the old Confederacy.
Despite the anniversary, and the fact that it comes near the end of years of special anniversaries associated with World War II, the defining world historical event of the 20th Century attention to Hiroshima seems, at least to me, to be more muted than during previous landmark anniversaries.  Perhaps it has to do with the rapid fading of the World War II generation itself.  Perhaps because a generation or more has come of age since the demise of the old Soviet Union and with it the Sword of Damocles threat of global incineration that Baby Boomer like me grew up with.  Despite rising tensions with Russia under Vladimir Putin no one expects that country to ramp up a new nuclear arms race or seriously threaten the United States or its European allies with nukes.  China, the emerging polar power vs. the U.S. has not been nuclearly aggressive.
There have been periodic scares from the Third World—largely fantastic attempts to whip up hysteria over supposed suite case bombs in the hands of terrorists, the so called Islamic bomb in Pakistan which was preemptively squashed by India, periodic bluster and chest beating threats from North Korea which have repeatedly been shown to be nothing but empty, and Israeli Prime Minister Netanyahu persistent attempts to drum up a war between the U.S. and Iran over as yet undeveloped possible nuclear arms.  But Americans no longer live with the dread of the world coming to an end tomorrow.
We may be too nonchalant.  This year the Bulletin of Atomic Scientists which keeps close track on such things re-set their famous Doomsday Clock to 11:57, slightly closer to midnight. 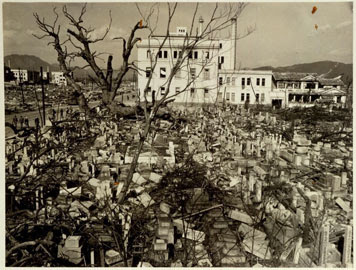 The U.S. Army Air Corps B-29 bomber Enola Gay piloted by Colonel Paul Tibbets dropped a bomb on Hiroshima at 8:15 local time as residents were beginning their work and school days.  To do justice to the occasion today, I would have to dwell in detail on what it was like in the city that morning when “the face of the sun seemed to kiss the earth.”  And frankly I am not up to that ever wrenching experience.  Call me a coward.  Instead, for just a taste of the horror and destruction I invite you to view Hiroshima: The Lost Photographs.

The Golden Anniversary of the Voting Rights Act might generate more interest than usual this year because voting rights are under such relentless attack and progressive forces are now beginning to rally to preserve them and to recoup what has been lost since 2013 when the Supreme Court overturned a key provision removing a critical tool to combat racial discrimination in voting. Under Section 5 of the landmark civil rights law, jurisdictions with a history of discrimination needed to seek pre-approval of changes in voting rules that could affect minorities.  It blocked discrimination before it occurred. In Shelby County V. Holder the Court invalidated Section 4—which laid out criteria for identifying  states and localities covered by Section 5—claiming that current conditions require a new coverage formula.  That left Section 5 intact but unenforceable.  The conservative majority on the court claimed that Congress could easily adopt a new formula and restore enforcement, knowing full well that with the House of Representatives in the iron grip of reactionary Republican majorities that no remedy would be enacted.
Since then attacks on voting rights have intensified across the country—and not just in the old Deep South.  Republican Legislatures and Governors have enacted waves of legislation aimed at curbing or discouraging voting by minorities and any groups of voters suspected of possible Democratic tendencies.  In the name of fighting a virtually nonexistent form of voter fraud—registration and voting by non-citizens misrepresenting their status—burdensome proof of identity legislation, including very limited numbers of approved identification documents and fees and charges for attaining those documents.  Places where applicants can obtain documents have been reduced requiring burdensome travel and their hours of operation restricted.  Students have been barred from registering where they attend college, even if they life there year round.  Early voting periods have been reduced and restricted.  Polling places have been eliminated and consolidated in minority areas to guarantee long and discouraging lines.  It seems like new and creative ways to curb registration or discourage voting are introduced every year, churned out by as model legislation by some right wing think tank and spreading from Red State to Red State like a virus.


Many, maybe even most, of these restrictions eventually get struck down in the courts, but not before having their desired effect for an election cycle or two.  With Section 4 in place, many of these changes would have been stopped by Federal review before they were even put in place.  Meanwhile there is a growing rank-and-file movement to reclaim voting rights in the same way as they were first won at bitter cost to begin with—with street protests and civil disobedience.  The NAACP’s Moral Monday movement in South Carolina is a model for a new activism and a movement that has been called the Selma of the 21st Century.

On August 6, 1965 President Lyndon Johnson signed the landmark National Voting Rights Act of 1965 in a ceremony at the White House attended by leaders of both parties in Congress and Civil Rights leaders including the Rev. Martin Luther King, Jr. and Benjamin Hooks.
My generation, which grew up protesting the War in Vietnam, grew to regard Johnson as “the enemy.”  Yet his record on domestic issues was unmatched by any President except Franklin Delano Roosevelt.  His Great Society programs, though far from perfect, were the last great systematic assault on poverty in our history.  And this Texas wheeler-dealer accomplished what Northern liberal John F. Kennedy never could—a comprehensive legislative attack on discrimination and the subjugation of Black citizens.
Perhaps we expected that subsequent Democratic Presidents would take up where Johnson left off without the stain of a fruitless war.  The fact is that whatever their intentions, none of them did.  The previous year the Civil Rights Act of 1964 opened doors of public accommodations in response to ongoing campaigns by the Southern Christian Leadership Conference (SCLC), the Congress of Racial Equality (CORE), branches of the National Association of Colored People (NAACP), and others.
But the historic pattern of restricting voting by Blacks through the use of poll taxes, literacy tests, and outright intimidation that was the hallmark of the Jim Crow era after Southern Whites dismantled the reforms of post Civil War Reconstruction, remained untouched.  With new militancy the SCLC and the Student Nonviolent Coordinating Committee (SNCC) turned to campaigns to register voters.
That campaign took a bloody, violent turn in Selma, Alabama earlier that year. Marchers attempting to reach the local Court House to register were attacked and many severely beaten. Black demonstrator, Jimmy Lee Johnson, was killed during a march in near-by Marion City.  Then James Reeb, a White Unitarian Universalist Minister who had responded to a call by Dr. King for support, was beaten to death shortly after arriving in the city.
Johnson instinctively knew that the death of the White minister would galvanize public sentiment and support in the way no number of Black deaths could. A few days later a massive Selma to Montgomery march was turned back with violence at the Edmund Pettis Bridge—Bloody Sunday.
On March 15, Johnson addressed a joint session of Congress to call for the Voting Rights Act. It was introduced in the Senate on March 18 by Senate Majority Leader Mike Mansfield of Montana and Republican Minority Leader Everett Dirksen of Illinois.
A second March to Montgomery, this time under the protection of Federal Authorities, got underway on March 21 and arrived at the Alabama capital for a massive rally on March 25 with the renewed purpose to supporting the Voting Rights Act.  After the rally a white Unitarian Universalist volunteer from Michigan, Viola Liuzzo, was shot and killed while driving a Black demonstrator back to Selma.
That only stepped up pressure on Congress, where despite a fierce last line of resistance by Southern Democrats, a filibuster was broken and the measure passed the upper chamber on May 26.   The vote was 77-19 with 47 Democrats in favor, 17 opposed and 30 Republicans—who still were proud to be the party of Lincoln—in favor and 2 opposed.
Delaying tactics and attempts at gutting the measure by amendment slowed action in the House of Representatives but it passed with minor amendments on a vote of 333-85 when Congress reconvened from the Independence Day recess on July 9.  A Conference Committee reconciliation of the two versions cleared the House on August 3 and the Senate the next day.
Johnson wasted no time scheduling a signing ceremony for August 6, just allowing enough time for major Civil Rights figures including King and Rosa Parks to attend.
Posted by Patrick Murfin at 3:23 AM