Labor Day—A Sop, But We Will Take It 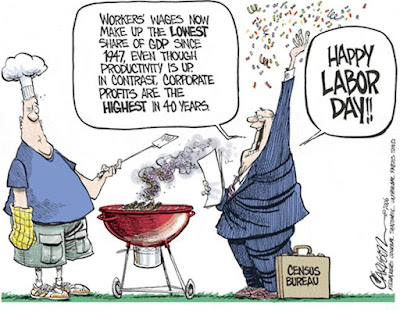 Note—I hope you are finding something appropriate to do to take advantage of Labor Day and advance the cause of working people.  If you are in the McHenry County area, stop by Woodstock Square  for an old fashion Labor Day Celebration with speakers and music from 11 am to 2 pm.  I’ll do some public bloviating from the Gazebo around 1:10.  Sponsored by local Bernie Sanders volunteers.
It officially Labor Day in the United States, a Federal Holiday celebrated on the first Monday of September since 1894.  For most people it is just the last hurrah of summer, an occasion for one last cookout and the gate way to fall and football season.  In most cities and towns the labor movement is not even perfunctorily acknowledged.  The press uses the occasion to annually either write the obituary of unions or to denounce them as powerful and greedy bullies, depending on the political inclination of the outlet.
While most of us working schlumps are grateful for the day off (if we get one), I for one, wish I could officially celebrate Labor Day with virtually the whole rest of the world on May 1.  International Labor Day was proclaimed by the Second International in honor of the memory of Chicago’s Haymarket Martyrs at the suggestion of none other than American Federation of Labor (AFL) chief Samuel Gompers himself and quickly spread around the world.  American unions celebrated it too.
But within just a few years Gompers was at the heart of a deal that substituted the September observance for May Day, a few crumbs from the Boss’s table, and a pat on the head by the Civic Federation in exchange for a promise to oppose labor radicalism and the growth of industrial style unionism in rapidly expanding basic heavy industry and the extractive industries—mining, forestry, agriculture, etc.
It is true that a September Labor Day observance pre-dated the 1886 Haymarket Affair.  In 1882 the New York Central Labor Union, made up of skilled craft unions belonging to a prototype of the AFL and lodges of the rival Knights of Labor cooperated in a call for a giant parade followed by picnics, games and amusements, and educational talks.  It was designed to showcase the pride and power of the labor movement and also to press for the chief demand of labor reformers—the Eight Hour Day—the same cause that would be marked by an attempted nationwide General Strike on May 1, 1886, an event that led up the attack by police on a worker’s rally in Chicago’s Haymarket on May 4 and the bomb blast blamed on the mostly German and anarchist leaders of the local labor movement.
New York City officials, eager to appease workers after a number of local strikes were suppressed with violence, gave their official approval to the parade.  On September 5, 1882 an estimated 30,000 workers marched in military order behind elaborate banners representing local unions of all of the trades, job shops, and Knights of Labor lodges.  It was an impressive display, but despite later claims by the AFL that observance of Labor Day spread quickly, only a few other cities, mostly in New York, began holding September celebrations. In the meantime huge May Day parades and rallies spread across the country.  But the late 1880s and early 1890s  were the beginning of a nearly 40 year period of virtual open class warfare with worker’s strikes being violently suppressed by local, state, and federal authorities and armies of private goons and strikebreakers.  And workers often fought back with equal violence.  Episodes like the Homestead Steel Strike with its running gun battles between Pinkertons and workers, the nationwide Pullman Strike of 1882, and virtually continuous battles in the coal fields and hard rock mines nationwide, made many fear for revolution or civil war.
Democratic President Grover Cleveland, who ordered out the Army to crush the Pullman Strike, wanted a symbolic peace offering to Labor without actually granting the movement any of its demands.
Republican king pin Ohio Senator Marc Hanna, soon to anoint William McKinley the next President, was even more ambitious—he proposed a pact of cooperation between capital and “responsible labor.”  He offered Gompers, the Cigar Roller’s Union chief who headed the AFL, a seat in his new Civic Federation alongside the robber barons and captains of industry.  Hanna did not make the same offer to Grand Master Workman Terrance V. Powderly of the Knights of Labor, who personally opposed strikes and advocated arbitration of disputes, because the members of Knights lodges included unskilled workers clamoring for recognition in heavy industry.  Gompers AFL would be allowed to pursue organizing skilled workers strictly by trade but not organize the great mass of unskilled, largely immigrant workers.  Gompers would also be called on to use his unions to oppose labor radicalism, and even to break strikes led by unions outside the grand agreement.
With Gompers in his pocket, Hanna engineered enough Republican support in Congress to get Cleveland’s official Labor Day proposal passed.  Cleveland signed it in to law just six days after Eugene V. Debs’s industrial union of railroad workers was smashed in the end of the Pullman Strike. Within a few years all states either aligned their existing Labor celebrations with the Federal holiday or enacted state proclamations echoing the U.S. call.
Meanwhile authorities everywhere tried to suppress May Day observances, which continued to be supported by militant unionists and radicals of every sort—social democrats, anarchists, and left wing Marxists.  The Knights of Labor withered away, but aggressive industrial unions, especially in the mining industry, continued to fight both the bosses and the AFL’s attempt to divide the aristocracy of labor from the mass rank and file.  In little more than a decade the radical Industrial Workers of the World (IWW) would be formed to intensify that battle.
During the Depression and the presidency of Franklin D. Roosevelt, Democrats became the party of labor.   Labor Day became the official kick-off of Democratic election campaigns. Labor Day parades and rallies often seemed more of platform to launch candidacies than a labor union celebration.

Even that has faded as the percentage of Americans in unions continued to shrink year after year after a high tide in the early ‘60’s.  By the Clinton era, Democrats continued to get support from labor, but seemed to try to disassociate themselves from it, shunning identification as the party for of labor in favor of being seen as the champion of the Middle Class.
As half-assed a holiday as Labor Day is, I hope we all will take a moment to thank the American Labor movement for largely creating that Middle Class.

Posted by Patrick Murfin at 8:31 AM