Presidents Day—Affirmative Action for the Inept, Foolish, and Knavish 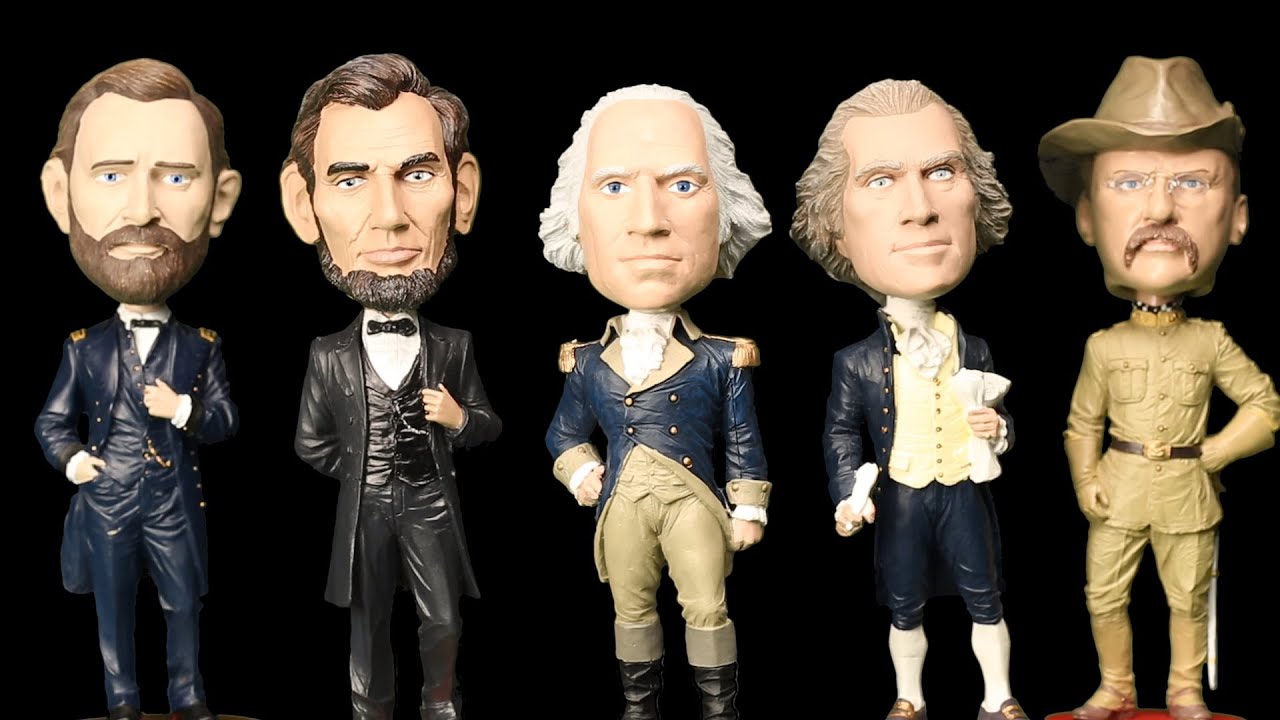 It’s Presidents Day.  Bear with me, dear reader, and try to sustain the warm glow of that holiday as you peruse my rambling thoughts.
To begin with, it’s a bastard holiday, born of merchant greed on one hand and the despair of parents stuck with small children at home twice in February.
The old Federalists made sure that the nation marked George Washington’s Birthday. It was to be a patriotic celebration emphasizing dignity, decorum, and authority.  In short, it was to celebrate a Founder demigod, an old revolutionary stripped of rabble and insurrection.  The old Republicans—the Jeffersonians—not to be confused with the current squatters on than honorable appellation—despised the celebration as monarchical and preferred to swarm the streets carrying  Liberty Caps on poles—French style—on other occasions.


But Washington deserved the honor.  He invented being President.  He served honestly and honorably, and if he preferred the council of his Secretary of the Treasury, Alexander Hamilton to that of his fellow Virginian Thomas Jefferson, at least he resisted all of the former’s blandishments toward aristocracy and his desire to advance himself as Grand Vizier to the President’s Caliph.  Most importantly Washington earned every accolade he has received by the simple act of voluntarily leaving the job and allowing his successor to peacefully follow him into office.  This precedent setting feat has seldom been matched in post-revolutionary nations.  That Americans take it for granted is astonishing.
Later, most Northern states added Lincoln’s Birthday to their calendars following the Civil War.  It began amid the hagiography of the fallen leader and his elevation to martyr status and continued as a way for the Grand Army of the Republic and the new Republican Party to Wave the Bloody Shirt at home while sticking their collective thumbs in the eyes of their vanquished foes.  Across the old Confederacy Lincoln was reviled as a murderous tyrant.  They preferred to celebrate Jefferson Davis, or better yet the unblemished knight of the Lost Cause, Robert E. Lee.

When Harry S. Truman finally proclaimed Lincoln’s Birthday a Federal holiday, his very Confederate mother, then residing with him and Bess at the White House, cursed her son and never forgave him.
So the nation ended up with two holidays in inconvenient February.  If only they had managed to get born at a decently separated interval of months, both might have been able to retain their own holiday.
But, alas, they did not.  And the days fell either inconveniently mid-week or on a weekend.  The former disrupted the work week for employers.  The latter cheated workers of a paid holiday.  Educators hated the disruption to their pedagogy for two holidays.  Parents despaired of rug rats at home.  Merchants yearned for an extended week-end of sales.  So Congress, in its infinite wisdom, decreed Presidents Day, conveniently set down on a Monday between the actual natal anniversaries of the original honorees.  Whoopee! Three Day Weekend!
Better yet, none of the rest of the denizens of the White House need feel slighted—this was going to be their holiday too.  Like a first grade T-ball player spared the sting of losing by playing a “fun game where no one keeps score,” Rutherford B. Hayes could rest easy in the comforting knowledge that he was the peer of the Founder and of the Emancipator.  It also silenced the partisans of Franklin D. Roosevelt on one hand and Ronald Reagan on the other, who dreamed of raising their respective heroes to a loftier pantheon and a place on the national calendar.


In the Declaration of Independence, Thomas Jefferson posited that “All men are created equal…”  Unitarian Universalists treasure our First Principle—“Respect for the inherit worth and dignity of every person.”  Neither of these are assertions of blanket uniformity of talent, capacity, or wisdom.   Nor has there been equality of ability, opportunity, and circumstance among the occupants of the Presidential chair.  There have been great presidents and there have been failures.  There have been, however, no saints and no pure knaves.
A popular pastime for the holiday is the annual articles listing the best and worse presidents.  By almost universal consensus the two original February honorees are listed one and two, occasionally swapping spots followed by Franklin D. Roosevelt, his distant cousin Theodore and either Thomas Jefferson or James Knox Polk (for Manifest Destiny fans.)
The classic roster of worsts includes of such luminaries as Franklin Pierce, John Tyler, Millard Fillmore, James Buchanan, Ulysses S. Grant, and Warren G. Harding.
All of which begs the question of how more recent Presidents fare.  Lately historians are rating Dwight D. Eisenhower as a comer, even breaching the top five on a few lists.
During his occupancy of the office I boldly suggested that George W. Bush may have done the impossible and reached the pinnacle of presidential awfulness.  He left office with few fans even in his own party, who were beginning to hate him not for his unnecessary wars but for being the champion spendthrift of all time.  Even his staunchest supporters have pretty much given up the campaign to paint the Shrub as a misunderstood Lincolnesque figure, boldly pursuing a noble cause while the ignoble people doubted.  It was simply too ludicrous to be maintained.
Does my harsh judgment hold up?  Most of the bottom dwellers on the list got there not for doing  bad, but for being lazy, incompetent, drunk or for not doing anything at all to stave off the long slide to Civil War.  Grant and Harding presided over notoriously corrupt administrations, but neither did lasting harm to the nation or Democracy.

But the legacy of George W. Bush was far more damaging and longer lasting.  He sponsored and presided over unnecessary war, prosecuted that war with stunning incompetence, nearly destroyed the ground forces of the U.S. military, proclaimed a doctrine of preemptive war that left the nation nearly friendless in the world, embraced a policy of torture, systematically attacked the civil liberties of American citizens, subverted the Constitution by asserting  a new doctrine of the unitary executive, turned a budget surplus into a staggering Federal Debt, pursued a policy of showering the rich with tax breaks and relief from regulation that has compounded the class divide in the nation to 19th Century levels, allowed an American city to be virtually destroyed and abandoned it citizens, attacked the “bright line” separating Church and State, ignored science whenever it drew conclusions that threatened his ideological preconceptions, and ignored Global Warming as a tipping point crisis nears.  And he exited shoveling money at the bankers who caused the greatest economic disaster since the Great Depression—and managed to make people think that that was his successor’s idea. That’s a pretty impressive list.  It surely means that he must at least have a spot alongside the “Northern men of Southern Principles—Pierce and Buchanan—whose malfeasance set the stage for the Civil War.
And what of the current occupant?  It is, of course, too early for the ultimate judgment of history.  Barack Obama certainly came into office at a time of crisis—a boost to any chances to make one’s mark.  Brilliant men and able men have served and been forgotten simply because of the relative tranquility of their terms.  Faced with almost unprecedented economic disaster and two unpopular wars almost impossible to easily and safely withdraw from, Obama soldiered on with dignity and surprising success given the implacable opposition of an ideologically driven opposition in control of Congress.  He even managed to secure the passage of the first major health care reforms since Medicare, however half-hearted and flawed they may be.  And after stunning the world by winning re-election by solid popular and Electoral College majorities he staked out a bold progressive agenda for his second term.  Finally giving up on hopes of compromise with the Republican Congress, he became more daring in shaping the national agenda by executive orders where possible.

But there is a major fly in the ointment—the fatal flaw that overwhelms real achievement and merit.  Lyndon B. Johnson advanced civil rights and social reforms continuing a New Deal legacy but was bogged down in a senseless and unpopular war.  Richard Nixon had foreign policy triumphs like opening relations with China and presided over the establishment of the Environmental Protection Agency and the Occupational Safety and Health Administration but was undone by his own paranoid criminality.  Woodrow Wilson’s international idealism and reluctant support of women’s suffrage was matched by unprecedented domestic repression of labor and socialists and by the introduction of Jim Crow segregation into the Federal Government.
Desperate for a way to extricate ground troops from Iraq and Iran and to counter the lingering threats of an already largely smashed and dismantled terrorist enemy, Obama embraced the star chamber secrecy and brutality of a secret war established by the Bush administration  and which he had once railed against.  And he came to rely on war-at-a-safe distance drone technology and a policy of targeted assassinations.  Not only have the targets included American citizens, more importantly they have also been blunt instruments with plenty of civilian deaths in collateral damage and by simple mistake.  Every Pakistani village hit earns generations of implacable new enemies sworn to revenge.  Far from restoring, as the world hoped after his first election, American prestige and respect, these policies have further isolated this country and made us the most despised nation in the world.  Further policies of domestic surveillance and coordination of attacks on the Occupy Movement and other social protests threaten freedom of speech and protest in this country.
If the President ever hopes to be enshrined as an extra head on Mount Rushmore he needs to reverse course on those policies which will surely poison his reputation.
On the other hand, he may come off looking pretty good by comparison to the parade of Republicans seeking to replace him, each one a shoe-in for the worst list if elected.
At any rate, happy Presidents Day to one and all.  Go and buy a mattress.  Millard Fillmore will thank you.