Well I am barbered to a fare-thee-well and suddenly respectable.  The greasy long locks are gone, goatee neatly trimmed, and bales of wild hair clipped from my ears and eyebrows.  I no longer look like Gabby Hays coming off of a three day toot. On the other hand my everyday summer straw hat no longer fits and tries to settle over my ears erasing an apparent 20 points from my I.Q.  At least I can change lids.  So evidently I am ready for a short round of personal appearances in McHenry County this coming Labor Day Weekend.
This is both a fair warning and an invitation depending on your stomach for Murfin musings and blather.
First up is the return of Haystacks Coffee House Open Mic and Jam for a new season this Friday, September 2 from 7 to 10 pm at the Tree of Life Unitarian Universalist Congregation, 5603 Bull Valley Road in McHenry.
The showcase for musicians of all types, poets and spoken word artists, comics, and even the occasional magician opens this year under new leadership.  Forrest Ransburg, Tree of Life’s new Music Director takes up the reins from Thomas Steffens who retired after long service this summer.  Ransburg promises to keep up the tradition of quality variety entertainment.


Who knows who will show up?  Maybe jugglers rejected from America’s Got Talent or dancing chickens.  Anything’s possible.  I can guarantee you that barring divine intervention, I will be on hand as usual to inflict my poetry on the unwary who do not bolt for the bathroom or coffee dispensers in time.  This time I will be armed with recent verse never yet performed in public.
Light refreshments including coffee, soft drinks, and water are available at no charge and there is no fee for admittance.  A free will offering will be taken to defray expenses. 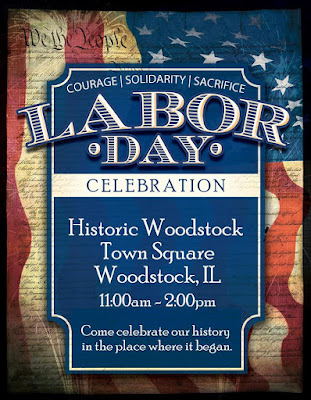 Then on Labor Day, Monday September 4 there will be a second annual celebration on Woodstock Square from 11 am to 2 pm.  Last year’s celebration was put together by Robert Rosenberg, Missy Funk, and other McHenry County supporters of the then long shot Presidential campaign of Bernie Sanders.
It was a salute to Eugene V. Debs who was held in the county jail overlooking the Square after the Pullman Strike of 1894.  While a prisoner there with the members of the Executive Board of the American Railway Union, Debs diligently studied and led discussions with his fellow workers and emerged as a dedicated Socialist.  We celebrated Debs, the working class, the labor movement and the connections to the current economic, political, and moral crisis.

I was fortunate enough to be invited to speak in my capacities as an amateur labor historian, social justice activist, and former local Democratic Party official.  I uncorked my inner soapboxer and let fly a barn burner oration.  It seemed to arouse some attention.  The rabble, I was told, were roused.
A lot has happened in the subsequent year, including the nearly successful Sanders campaign the rallied millions to his call for a political revolution.  But we have also seen the rise of rampant fascism in the guise of the Donald Trump campaign which did seize the Republican nomination and has nearly shattered the former party of Lincoln.  We have seen our society sliced, diced, and set against each other by race, ethnicity, religion, sex, and gender identity.
I was surprisingly asked not only to speak again but to deliver the keynote speech of the afternoon.  Surprising because although a strong Sanders supporter, I was critical, even harshly critical of some Bernie-or-Busters and not only their adamant refusal to follow the Senator’s lead and support Hillary Clinton this November, but their obsession with characterizing her as the devil incarnate including parroting old discredited right wing smears.
Here in McHenry County, however Sanders supporters willing to go along with Clinton and those swearing never to vote for her, have united to continue the call for a political revolution.  Several, like Robert Rosenberg, have put themselves on the line by running as Democrats for local and regional offices this fall.
This Labor Day celebration, they say, will not be a political rally.  Candidates are asked not to campaign but to represent their solidarity with an ongoing working class struggle.  I want to speak about Labor Day in that connection, not just as a historic relic.
So stop by, if you can.  I plan to orate the hell out of the afternoon and talk a lot about the working class virtue of solidarity.
After the celebration is over a 2 o’clock, I’ll be heading back to the Murfin estate in Crystal Lake where our clan plans to congregate to char former ectoplasm in the front yard and also celebrate Darlin’ Daughter #3 Maureen Rotter’s birthday.  Her party was delayed by moving in with husband Kevin and personable pooch Piper to the Old Folk’s home last week on her actual natal anniversary.
It you are cruising down Route 176 that afternoon, beep and wave as you pass by.  Or pull into the Quarhammer Funeral Home parking lot next door and join us.  There will probably be brats and burgers to share.

Posted by Patrick Murfin at 4:44 AM