Surprise! Casimir Pulaski Day is Actually a Holiday in Illinois 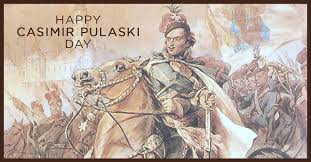 Today was Casimir Pulaski Day.  If you just responded with a “huh?” you don’t live in Illinois where it is an official state holiday celebrating Polish ethnic pride and political clout.   And, by the way, the Revolutionary War officer remembered as the Father of the Cavalry who died in a glorious but reckless lancer charge on British artillery at the siege of Savanah.
For decades Chicago’s huge Polish community—the Toddling Town was the largest Polish city in the world—yearned for acceptance and proof that they had muscled their way at last to equal recognition with the city’s other major ethnic groups.  The damned Irish, who lorded it over everyone else had St. Patrick’s Day and two, count ‘em, two big Parades one on the South Side and the Daley extravaganza on State Street.  The Italians had Columbus Day and their own big parade plus the Outfit which pretty much ran a lot of the city and all of those pizza parlors.  The Puerto Ricans had their Independence Day and Humboldt Park even if they never got any real independence.  The Mexicans got Cinco de Mayo which wasn’t even much of a thing south of the Border.  And then when Martin Luther King died, Blacks started demanding a holiday in his honor even though the Poles had been here longer and had patiently waited their turn.

The Polish community pinned their hopes for recognition on the Continental Army trooper.  They could have picked another Polish emigre soldier,   Thaddeus Kosciuszko, who played a much more significant role in Polish history.  He was commissioned a Colonel and served as an engineering officer under General Horatio Gates.  He distinguished himself at the Battle of Saratoga where he laid out the Continental defenses around Bemis Hill that would confound all of Gentleman Johnny Burgoyne’s attempts to attack.  Later he constructed the fortifications of Fort Clinton at West Point then commanded by Benedict Arnold.  He still later served with great distinction in the Sothern Campaign under Nathanial Green.  At war’s end he was promoted to Brigadier General, but found that collecting his seven years back pay was nearly impossible.
After returning to Poland he became a hero and commander in the Polish–Russian War of 1792.  That war ended with loss of territory with extended Russian influence over much of the Commonwealth.  In 1794 the country faced partition between surrounding powers Russia, Austria, and Prussia.  Kosciuszko became commander-in-chief of the insurrection that became known as the Kosciuszko Uprising and defended Warsaw from onslaughts by the Prussians and Russians.  Eventually he was wounded, captured, and imprisoned by the Russians after the Third Partition of Poland.  After finally being pardoned, he returned to the United States as an exile.
He eventually returned to Europe where he engaged in talks to lead a Polish force in Napoleon’s army in exchange for French support for a liberal Polish republic.  When Napoleon showed himself to be a dictator and only hoping to use the Poles as a pawn he abandoned that project.
Kosciuszko was a true Democrat in Poland he advocated not just the emancipation of serfs and Jews, but offering them full citizenship rights.  In his will he left his American holdings to a fund to free the slaves—which American courts refused to honor.  Kosciuszko died in Switzerland at the age of 71 in 1817.  He was revered as a Polish national hero.
You would think such a man would be the one Chicago’s Poles would choose to be their symbolic secular saint.  Instead they picked the dashing cavalryman.  Poles are at heart deeply romantic and the cavalry holds a special place in the national identity and units of hussars and later lighter uhlans were the core of Polish armies and their most successful units.  A man on horseback who died gloriously easily trumped an engineer, no matter how skilled or useful.
Casimir Pulaski, son a Polish noble was born on March 6, 1745 in Warsaw.  After the election of King Stanisław II August of the Polish-Lithuanian Commonwealth in 1764 his father became one of the leaders of the Bar Confederation, which saw the King Stanisław as a Russian puppet and sought to end Russian hegemony over the Commonwealth and restore the traditional role of the nobility in a decentralized semi-feudal governance.  The Bar Confederation went into open rebellion and young Casimir was commissioned as a cavalry officer fighting both the King’s loyal forces and the Russians.
He proved to be an adept, skillful, and audacious commander of a Banner—the basic unit of Polish cavalry which was recruited and paid by the noble families sponsoring them—rising quickly after a series of victories in 1768.  He was captured by the Russians  that June after leading a two week defense in the siege of a monastery in Berdyczów.  He was paroled after pledging to renounce his allegiance to the Bar Confederation and not again take up arms against the King.  When he returned to Warsaw he declared that he did not consider his renunciation binding because it was given under duress.  Many Bar leaders, including his father, considered the renunciation dishonorable and even pressed for a court martial.
But the rebels needed quality commanders and eventually he was reinstated however grudgingly.  He served with notable distinction thought the rest of the war until 1772 when the Bar Confederation was finally defeated.  During this time he won many victories and fame and was raised to the command of a regiment of several banners.  He often operated independently and sometime refused to coordinate with other commands and units.  He was considered a loose cannon and increasingly at odds with the political leadership of the Confederation.
The resistance was hard pressed by numerically superior forces including large Russian formations and by Austrians and Prussians equally eager to carve up Poland 1772.  In some desperation Pulaski agreed to join a plot to kidnap the King.  The plot was foiled and revealed forcing Pulaski to flee to France.  He was tried in absentia, convicted of attempted regicide, stripped of all property, and sentenced to death.  Because of the regicide charge he could not be given official sanctuary in Paris and had to stay there illegally.  His attempts to offer his services to the French and other armies were rebuffed.
Pulaski survived with the support of a Polish exile community but was occasionally imprisoned for debt.  He did meet liberal French aristocrats like the young Gilbert du Motier, Marquis de Lafayette who in turn introduced him to American minister Benjamin Franklin who was looking for experienced European officers to serve the Continental Army in 1777.

But the struggle to get Illinois to declare a holiday was epic in itself and a case study in ethnic pride and politics.
Back in 2000 while I was a custodian at Briargate Elementary School in Cary, Illinois I reflected on that in a long poem I shared with the staff when school was closed to students for the Holiday. Later it was reprinted in the UUNews, a weekly unofficial UUA e-mail newsletter in which I was sort of a resident versifier.  Somehow it was discovered by some Polish-American patriots who were very offended to the point of threatening physical violence.
You be the judge, because we are reaching way back and telling that part of the story in the old ballad.

So we sing your paeans and remember—

How you, bright young Pole,
hero of your people,
burning with the Rights of Man
with dash, swagger, and soldierly stupidity
consecrated yourself a martyr
upon the Redcoat cannon at Savannah.

And it was you, in Great Chicago—Warsaw-by-the-Lake
who exiled Slaves,
fodder for the Stockyards,
taconite for blast furnaces,
faceless brawn in a thousand factories,
charwomen of the high rise palaces of privilege,
you they called to be their patron and their hero.

It was you they remembered
as they waited patiently for the Irish dynasty to pass,
to take their turn at command,
to reap the spoils, plunder, and patronage
due them for their steadfast, plodding service.

And it was to you they cried
when the niggers usurped their place
and when, with taunting arrogance,
dark Chicago named a feast for their saint,
the same King who had marched through
Polish bungalows and two flats
shattering the peace by inviting stones with his head.

In your name old Roman Puchinski,
the very Prince denied the throne
blocked a State feast until your name
could be placed with Columbus and St. Patrick
on the calendar of veneration,
until Harold Washington threw back his massive head,
crinkled his eyes and boom his great voice—
“It’s a deal!
I will come and stand by you
at the Polish National Alliance,
under the White Eagle Flag
and listen to pretty golden hair children in peasant dress
sing and spin to accordions.
And you will come with me in January
as we listen to some bright preacher’s son
recite, ‘I Have a Dream.’
Then both of us on St. Patrick’s Day
will don green paper derbies and broad sashes,
clutch blackthorn sticks
and arm in arm step off lively
behind the wailing pipes of the Shannon Rovers
as the Irish, green beer in hand,
jeer and hiss us both as interlopers and pretenders.”

As for the Illinois Holiday, it has come in for hard times.  Concerned with lost instructional times because of several holidays including the State observance of Abraham Lincoln’s Birthday and Veterans Day on November 11, the legislature made school closing optional with an application for an easily obtained waiver.  Over 75% of Illinois school districts have done just that.  Even in Chicago the 2012 Public Schools contract with the Chicago Teachers Union allowed that massive system to opt out.
Poles were enraged but their political clout has greatly diminished as many of second and third generation have assimilated and relocated to suburbia as part of the general White Flight of ethnics’ They have left behind vibrant but shrunken neighborhoods where the elderly first generation immigrants of the Post World War II years mingle with recent arrivals, many of them undocumented.  From de facto control of broad swaths of the Northwest, Southwest, and East sides. Their political influence has shrunk to a handful of wards largely supplanted by the rising Latino communities, and the reverse migration from the suburbs of young professionals and hipsters.

Posted by Patrick Murfin at 8:15 PM