Murfin’s Seven Books in Seven Days—The Round Up. 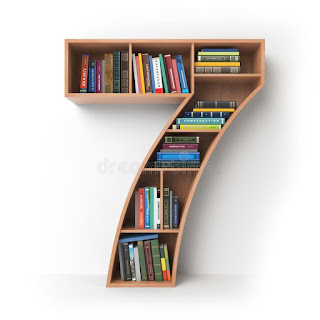 Note:  On Suggestion of old Shimer College pal Sammie Moshenberg I undertook the Facebook challenge of Seven Books in Seven Days.  It took me more than seven days, but I got it done.  Since even folks on FB may not have seen the whole roster and because my half-assed literary tastes may be of some limited wider interest or the subject of bemused bewilderment, I am including lightly edited versions of all seven posts here.
I was not exactly sure what the rules are for Seven Books in Seven Days—favorite books? Most influential? Fiction only? Anyway, I decided yes to all of those questions. 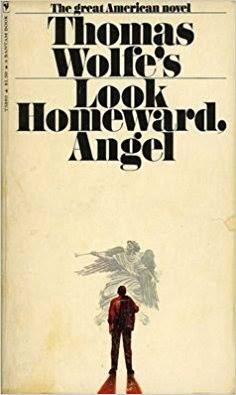 Day 1—Thomas Wolfe’s Look Homeward Angel bit me while I was in high school. I was gobsmacked by the sheer power of the language:
. . . a stone, a leaf, an unfound door; a stone, a leaf, a door. And of all the forgotten faces.
Naked and alone we came into exile. In her dark womb we did not know our mother's face; from the prison of her flesh have we come into the unspeakable and incommunicable prison of this earth.
Which of us has known his brother? Which of us has looked into his father’s heart? Which of us has not remained forever prison-pent? Which of us is not forever a stranger and alone?
O waste of lost, in the hot mazes, lost, among bright stars on this weary, unbright cinder, lost! Remembering speechlessly we seek the great forgotten language, the lost lane-end into heaven, a stone, a leaf, an unfound door. Where? When?
O lost, and by the wind grieved, ghost, come back again.
I decided then and there to be a writer. This is the big, fat Bantam Books paperback edition that put a real strain on the back pocket of my pants. 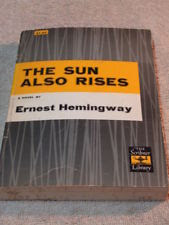 Day 2:  Ernest Hemmingway is deeply unpopular these days among progressives and especially feminists. Mostly based on the macho image he cultivated later in life, he is filed under chauvinist pig and if you admit to liking him your cultural stock drops like shares in Trump University. But for me, the power of the simple declarative sentence I found in The Sun Also Rises was a much needed antidote to the florid temptations of my first pick, Look Homeward Angel.  Papa would go on to write better books, and books much more nuanced than his reputation, but this is the one that first hooked me, even though when I first read it I was too young and stupid to figure out just what the hell Jake’s problem was. 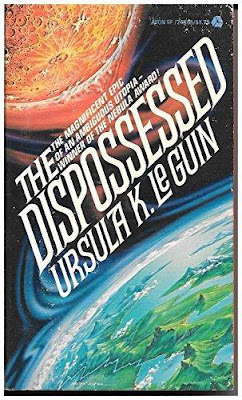 Day 3:  When I was fresh out of College and living in Chicago I was reading science fiction almost exclusively except radical stuff, mostly labor history and anarchist related. Both of those reading obsessions were rewarded in Ursula K. LeGuin's masterwork of speculative fiction The Dispossessed about an almost utopia on a planet based on the ideas of nonviolent anarchist writers such as Peter Kropotkin and Paul Goodman. It was also a frankly feminist vision in stark contrast to the vigorously macho—and often authoritarian—SciFi offered by many of the top writers in the field. The society was built on the writings and ideas of the crone Odo—an Emma Goldman-like personage. LeGuin called it “an ambiguous utopia” because unlike other anarchist writers she did not believe that either human or societal perfection was possible. Not only was the book unusually thought provoking, but LeGuin was a literary stylist of the first order and prized complex characters over moving a plot line to a predictable conclusion. 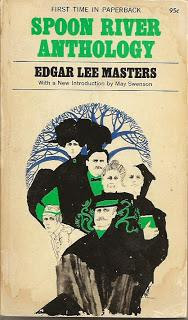 Day 4:  Not sure of original parameters of this exercise, I decided to limit my list to fiction. So how did Edgar Lee Master’s Spoon River Anthology—notoriously a book of poetry—get included?  It’s my opinion that if it was newly published today that it could be hyped as a cutting edge novel in verse. The large cast of characters—the dead of all ages, both sexes, all social classes spanning generations each speak from their graves in the Southern Illinois village cemetery. Their lives intersect in interesting and often startling ways and weave a narrative of the life of the town over decades. Masters was anything but sentimental for the backwater village he grew up in. He was clear eyed, sliding to cynical—the true son of the Village Free Thinker who was a scandal to the “good folks.” It you ever harbored delusions of fantasy small town America fostered by Disney and even by adept writers like Booth Tarkington or Thornton Wilder in Our Town, this is just the book to bury those. A great read every time I pick it up. 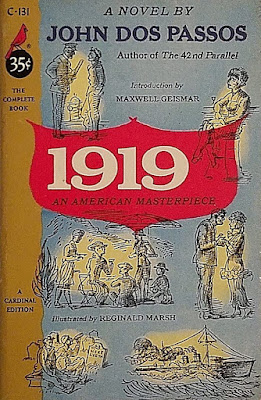 Day 5:  1919 is actually the second book of John Dos Passos’ USA Trilogy, one of the great achievements of 20th Century American Literature. It stands for the whole master work. Not only are these books historically significant, they are endlessly inventive and hugely influential on future writers like John Steinbeck, Jean Paul Sartre, and E. L. Doctorow. Dos Passos follows the disparate but sometimes intersecting lives of a dozen major and several minor characters of widely varying social class and prospects and both sexes through the first quarter of the 20th Century. Even these fragmented narratives are broken up by three separate intervening devices—the famous Newsreels which capture reporting of historical events contemporaneous to the stories, mini-biographies of major figures like Woodrow Wilson and Henry Ford, and The Camera Eye which were stream of consciousness autobiographical riffs on the author’s own development and relationship to his times. These are big, thick, important books, but don’t be discouraged from tackling them. Dos Passos took a radical lurch to the far right evident in his post-World War II work including Midcentury and that has deeply tarnished his reputation and legacy. Whatever anti-Communist hysteria and libertarian delusions he adopted late in life, the power of these social narratives written and published in the early 1930’s can’t be denied. 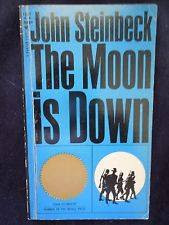 Day Six:  If you have been following this exercise you probably have noted my predilections and will not be surprised to see something by John Steinbeck here. You may be surprised by the choice. The Moon is Down is one of his least well-known works. It is a slender novel based on his own wartime play which also became a 1943 film starring Cedric Hardwick, Henry Travers, Lee J. Cobb, and Clair Trevor. It tells the tale of a small Norwegian village and the quiet resistance that mystifies and thwarts its German occupiers. The German officer in charge is not the usual war-time caricature of a demonic, sadistic Nazi. He seems largely a-political, a just-doing-his-job professional who even seems to strive to be humane and reasonable. But like the nice young men who serve under him he is the agent of a vast evil and inexorably compelled to ruthlessly serve it. The book deeply moved and impressed me when I stumbled upon it by accident. Not long after that Steinbeck returned from a Defense Department-sponsored trip to Vietnam. On return, he announced, “I am a hawk, not a pigeon” and heartily endorsed the war. It was quite a propaganda coup for the Johnson administration which was being criticized by numerous writers, artists, and intellectuals. I somehow found Steinbeck’s home address and sent him a telegram—some of you may remember those—that simply quoted a line from the book—a “The flies have captured the fly paper.” 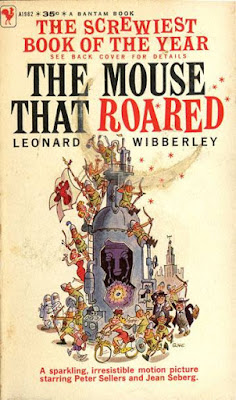 Day 7:  If you have been following this series, you can tell that my picks tend toward major and serious American novelists of the 20th Century. I could continue on that vein, but I also have always loved a great funny book. And the funniest laugh-out-loud book I have ever read was The Mouse that Roared, the 1955 Cold War satirical novel by Irish-American writer Leonard Wimberly. T
he story was laid in the mythical micro-state of the Duchy of Grand Fenwick nestled in a forgotten corner between France and Switzerland that by an accident of history was established by English knights and remains English speaking. In fact, it astonishingly mirrors post-war British society with a tiny Parliament dominated by a stuffy Tory Prime minister with a Labor opposition leader in heavy tweeds with a class chip on his shoulder, all ruled benignly by a young Duchess. The agrarian economy depends on production of a coveted wine, but is nearly destroyed when a California winery produces an inexpensive knock off. To save the country from ruin, the Prime Minister decides to declare war on the United States, lose, and wait for scads of money that America gave to its former foes under the Marshal Plan. The State Department promptly loses or ignores the official declaration of war, and it is decided to that the Duchy must actually launch an attack on the superpower. The befuddled Forester is made Field Marshall and dispatched on a rented tub with an army of three Men at Arms and a dozen Yeomen armed with English long bows all decked out in chain mail and tin hats to invade the USA. Tully, the commander, does not grasp that he is supposed to lose the war. When they land in New York City they find the streets deserted as the city undergoes a mass civil defense drill. After wandering around they stumble upon the laboratory of an absent minded professor and his creation—the Q Bomb, a new super powerful doomsday weapon that makes the H-bomb look like a firecracker. They return home with the professor and the bomb as victors and suddenly Grand Fenwick is the most powerful nation on earth.
The book was also made into a popular film with Peter Sellers playing multiple parts including the Prime Minister, Opposition leader, Duchess and Tully Bascom.  I picked the book up again by chance a couple of years ago and it is still both hilarious and has some pointed lessons about the Cold War and international Real Politic.
Posted by Patrick Murfin at 5:46 AM

Email ThisBlogThis!Share to TwitterShare to FacebookShare to Pinterest
Labels: 1919, Look Homeward Angel, Patrick Mufinr, Seven Books in Seven Days, Spoon River Anthology, The Dispossessed, The Moon is Down, The Mouse That Roared, The Sun Also Rises