Was Sliced Bread the Best Thing Ever? 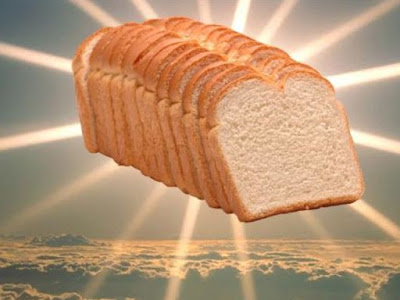 It’s a little old fashioned but you have probably heard or used the phrase “the best thing since sliced bread.”  It was an idiom originally meant to convey a sense of wonder and appreciation for some new gadget or development.  Later it took on something of a sarcastic connotation.  After all, sliced bread had become so commonplace that is seemed damning with faint praise.  To understand why sliced bread was such a wonder, we have to look back on those dark, dark days before you could pick up a loaf of neatly sliced and wrapped bread at any food shop.
It was on July 7, 1928 when the Chillicothe Baking Company of Chillicothe, Missouri, a small commercial bakery first used the bread slicing machine developed by Otto Frederick Rohwedder on bread for sale.  They called their new product Kleen Maid Sliced Bread and it was a resounding success from the moment it hit the shelves.
Think about that date for a moment.  By 1928 railroads, the telephone, and electric lights were already in use for generations.  The automobile and trucks had virtually replaced horse drawn carriages and wagons on American streets.  The Wright Brothers had long since first flown and mail and even passengers were regularly winging between cities.  Commercial radio was taking off and handsome cabinet receivers were becoming center pieces in middle class parlors.  There were movie palaces in the downtowns of every city and theaters in every neighborhood and small town.  Just the previous October Al Jolson had sung Mammy in the Jazz Singer and many of those cinemas were already scrambling to install the equipment for the popular new talkies.  Just about every element of modern life was already in place.

But before that fateful July day, Americans bought their bread fresh daily from local bakeries.  At home if they wanted bread on the dinner table with butter, to make sandwiches to take to work or school for lunch, or have toast with breakfast it required a super sharp knife and a deft hand.  Otherwise it was easy to shred the loaf or mangle and squash it while getting a firm grip on it.  America’s favorite white bread needed to be crusty and firm enough to withstand the surgery.  Even if neatly sliced, it was difficult to get slices of consistent thickness.  Slices tended to be thick and only a few could be cut from the loaf.
Toast was replacing biscuits for breakfast since the introduction of electronic toasters, but those toasters could typically burn only one slice at a time which had to be carefully watched and then turned by hand to be crisp on both sides.  With the introduction of thinner, uniform bread slices made revolutionary the Toastmaster Model A-1-A, first offered for sale in 1925, and other quickly introduced pop-up toasters on fixtures on kitchen counters everywhere.

Otto Frederick Rohwedder was born to German immigrant parents on July 7, 1880.  He had a degree in optics from the Northern Illinois College of Ophthalmology and Otology in Chicago. But he had also apprenticed as a jeweler.  He returned to that trade and also showed he was a shrewd businessman who was able to open a small chain of three jewelry stores.
Like many jeweler/watch repairmen he found that his skill with fine intricate machinery could be applied to other projects.  With his shops successful enough to allow him time to dedicate to tinkering and experimentation.  He began obsessively working on a machine to slice bread, a project whose complex requirements and multiple blades had defeated other would-be developers.  As he got closer to a practical design, Rohwedder sold his stores to finance finishing the work and going into production.

By 1917 he had developed a prototype and had opened a small machine shop to go into production.  But then disaster struck.  A fire destroyed the prototype as well as all of his drawings and notes as well as all the machines and tools he had assembled.  Without insurance he was unable to immediately resume his work.
It took ten years while Rohwedder scrimped, saved, and rounded up small investors while he worked on improving his first design.  In 1927 he obtained a patent on an improved machine that not only sliced the bread, but wrapped it.  He got enough money together two build two new prototypes.  He sold one to his friend Frank Bench, who installed it at the Chillicothe bakery.  By coincidence Bench went into production with the machine on Rohwedder’s 48th birthday.
About the same time the second machine was sold to a bakery in Battle Creek, Michigan.  That city has disputed Chillicothe’s claim to being the home to the first commercial use.  But since no documentation can be found on the exact date that the machine was first used in Michigan, most historians of invention and production have stood by the Iowa town’s boast.
Both bakers reported the quick success of their products and they popularity with customers.  Orders for more machines started pouring in.  So did improvements.
The machines were used by a single seated operator who hand inserted one loaf at a time. It was a somewhat laborious process and the slices had a tendency to separate and fall before the wrapping was completed.  Within months a St. Louis baker, Gustav Papendick, invented an improved wrapping process using cardboard trays to hold the loaves together.  Rohwedder himself and other inventors continued to file patents for further improvements.  Within a few years the machine was adapted for use on a semi-automated production line allowing for the production of bread on an industrial, rather than handcraft scale.

W.E. Long, who licensed his Holsum Bread brand to local bakeries around the country, began promoting use of the Rohwedder machine to the bakeries so that there would be a consistent product in late 1928.  Two years later Wonder Bread, which had introduced its super soft loaves in 1927, adopted the improved equipment for its brand, produced in large regional commercial bakeries which rapidly spread over the Eastern United States.
The public literally ate up the products as fast as production could be ramped up.  It was Depression proof.  Bread was a relatively inexpensive commodity and the price per-loaf of the improved product was actually coming down due to economies of scale.  Everybody bought bread even if they could hardly afford to buy much else in the way of food.  Consumption of bread also soared, attributed to the convenience of use and the thinner machine slices adapting well to toast and sandwich making.  Waxed paper wrapped sandwiches with a single slice of bologna or cheese, or even just mustard or a thin layer of peanut butter became Depression staples.  By 1933 more than half of all bread sold in the U.S. was sliced and the percentage leaped ahead every year.

The bread slicers/wrappers also encouraged development of related technologies—Scotch Tape, for instance, was first commercially applied to sealing the wax paper wrap of loaves coming off the conveyor.

Commercial sliced bread also greatly contributed to how Americans shopped.  Previously almost all bread was either home baked or purchased at small local bakeries.  The small shops struggled to afford the expensive slicing machine.  Bread began to show up on grocery store shelves along with bags of commodities like flour, sugar, and coffee, canned goods, and refrigerated dairy products.  It contributed to the transition from grocery clerks fetching products from behind the counter shelves to the new self-service stores like the growing Piggly-Wiggley and A&P chains.  By the mid-30’s chains like Ralph’s and Safeway on the West Coast and Kroger’s in the Midwest were opening large stores On the Super Plan which added fresh produce, meats, and the newly developed frozen foods to the non-perishable staples and bread offered by the old groceries.  Big commercial bakeries had no trouble keeping the shelves stocked with plenty of their brightly wrapped product.

Of course thousands of local bakeries were forced out of business in the process.  Those which survived either had to European specialty breads in immigrant city neighborhoods or become specialists in cakes, cookies, and pastries.
A sign of how dependent American consumers had become on sliced bread came in the debacle that occurred when bureaucrats of the war time Food Distribution Administration moved on January 13, 1943 to ban the sale of sliced bread nationally as a food conservation measure.  Patriotic housewives who had stoically endured food rationing and coupons, meatless and sugarless days and other deprivations openly revolted flooding the agency, politicians, and newspapers with anguished complaints.  A letter in the New York Times just days after the ban went into effect was typical:
I should like to let you know how important sliced bread is to the morale and saneness of a household. My husband and four children are all in a rush during and after breakfast. Without ready-sliced bread I must do the slicing for toast—two pieces for each one—that’s ten. For their lunches I must cut by hand at least twenty slices, for two sandwiches apiece. Afterward I make my own toast. Twenty-two slices of bread to be cut in a hurry!
The agency was able to shut down production by the big commercial bakeries, but smaller independent shops and delicatessens continue to use their machines to satisfy the demands of their customers.  Official issued threats of draconian measures against offenders.
At first they doubled down defiantly on their position but were soon taking heat from Congress and other branches of the Administration.  On March 8, less than two months after issuing the order the Food Distribution Administration ran up the white flag and rescinded it.  They covered their asses with a statement that the savings in commodity flour had not been as great as projected.  Plenty of sliced bread, which was still rationed, was back on the shelf in no time.

As for inventor Rohwedder, he made out pretty well himself, if not spectacularly.  In 1930 he sold his patent rights to the Micro-Westco Company of Bettendorf, Iowa. He became vice-president and sales manager of its Rohwedder Bakery Machine Division. He retired in 1951 at the age of 71.  Despite is revolutionary contribution to the American way of eating he never became a household name and remained personally obscure outside of the baking industry.  He didn’t seem to mind.
He died on November 6, 1969 at the age of 80 in Michigan.