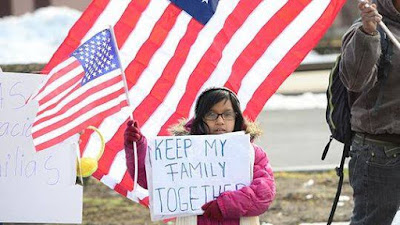 Let’s Talk about Immigration, a panel discussion and public forum, will take a close look at the realities and personal costs of the immigration system as it is being aggressively pursued by the current administration at the Tree of Life Unitarian Universalist Congregation, 5603 Bull Valley Road in McHenry on Friday, October 19 from 7 to 9 pm.
The panel, moderated by Dr. Lisa Messinger of the Tree of Life Social Justice Team, each participant brings years of personal experience with various aspects of immigration.

Attorney Randy Rapp is a co-founder of the National Immigrant Justice Center and member of the board of the Immigration Project.  Rapp has experience in organizing representation of and directly representing immigrants on pro bono basis, since first arguing claims for political asylum starting in the 1980’s.

Longtime local community and social justice activist Sue Rekenthaler is a volunteer with the Interfaith Community for Detained Immigrants.  She has worked tirelessly with providing pastoral care to detained immigrants for many years.  The McHenry County Jail houses an Immigration Detention facility with detainees from all over the world.

Julie Contreras is a United Methodist Minister and the National Immigration Chair of the League of United Latin American Citizens (LULAC), the nation’s oldest and largest Latino civic and civil rights organization.  She has been an activist on the front lines of many struggles.
The program is the first of a new series of public educational forums on critical social issues presented by the Social Justice Team of Tree of Life.
Questions and discussion will follow the panel discussion.
The program is free and open to the public.
For more information contact Tree of Life at 815 322-2464, e-mail office@treeoflifeuu.org or visit https://www.facebook.com/events/108033136780106/ .