Mary Oliver—Poet in Harmony With Nature Completes Her Cycle 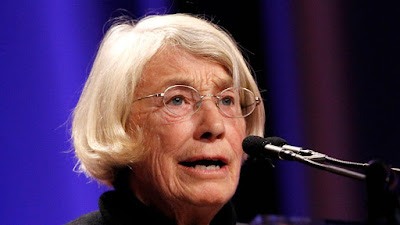 Mary Oliver who died of lymphoma today at age 83 at her Hobe Sound, Florida home was the rare contemporary American poet who was both widely read and critically acclaimed.  She was the best-selling American poet whose books are bought and read by people who do not read poetry.  But she has also won the Pulitzer Prize, National Book Award, numerous other honors, and academic recognition despite never completing a bachelor’s degree.
Her work celebrated and explored nature, often as an empowering force of the feminine.  She mastered, if she did not invent, feminist neo-transcendentalism—which I have no idea is a real school, but should be.  If it has not been described that way elsewhere, I congratulate myself on coining a useful phrase.
The semi-mystical, but plain spoken confabulation of nature with the divine feminine, has not pleased everyone.  Oliver has her critics, particularly among certain feminists who disparage her refusal to be an overtly lesbian writer or to explicitly enter political and social criticism.  Avant-garde circles disparage her refusal to come to grips with gritty modern reality and accuse her of a certain Romantic escapism.
All of this bothered the intensely private Oliver not at all.  She blithely continued to pursue the work of a life time in conformity to her own vision.  And millions are glad she did.
Among her foremost fans are Unitarian Universalists.  May Sarton may have been declared “our poet” forty years ago or more, but many more U.U.s read Oliver.  Many probably assume that she was one of us, which she was not.  But the identification is understandable because the UUA’s Beacon Press has been the publisher of her most successful collections and her poems are excerpted several times as readings in the familiar gray hymnal Singing the Living Tradition.  I know many ministers keep her volumes in arm’s reach of their desks and her poems often illustrate sermons.
Oliver was born September 10, 1935 in Maple Heights, Ohio, semi-rural suburb of Cleveland. As a child she enjoyed exploring the creeks and woodlots of her neighborhood.  Her father, a high school English teacher in Cleveland, encouraged her bookish interests and her beginning explorations of poetry at the age of 14.

At 17 Oliver made a pilgrimage to the home of a hero, Edna St. Vincent Millay in upstate Austerlitz, New York where she made friends with the late poet’s sister Norma.  For the next seven years she lived on and off with Norma as a combination companion and an assistant in organizing Edna’s papers.  Thus the leading female poet of the first half of the 20th Century and the closing years and dawn of a new century were linked both spiritually and physically.
After leaving Austerlitz, Oliver attended both Ohio State University and Vassar College in the 1950’s, but never graduated.  She began publishing her poems in the usual little magazines and literary journals and was slowly building a reputation.

Late in the decade Oliver met photographer Molly Malone Cook on a visit back to the Millay home.  The two became an inseparable couple.  Cook became Oliver’s literary agent and documented her and their life together with her photographs.  The couple lived mainly, with a few diversions to college towns where Oliver was called to teach despite her lack of academic credentials, in Provincetown, Massachusetts on Cape Cod for forty years until Cooks death in 2005.  Oliver continues to live there until she was successfully treated for breast cancer in 2012, then moved to Florida.

Oliver established herself as a poet to be reckoned with in 1963 with the publication of her first collection, No Voyage, and Other Poems at the age of 28.  She had a productive career since then.  Among her major works are The River Styx, Ohio, and Other Poems in 1972;  American Primitive in 1983, winner of the Pulitzer Prize; House of Light  in 1990 which won the Christopher Award and the L. L. Winship/PEN New England Award; New and Selected Poems  in 1992, which won the National Book Award; Winter Hours: Prose, Prose Poems, and Poems  in 1999; a book-length poem, The Leaf and the Cloud in 2000; Why I Wake Early  in 2004; Thirst in 2006; Swan: Poems and Prose Poems in 2010; A Thousand Mornings  in 2012; Dog Songs in 2013; and Blue Horses in 2014.
Despite her lack of academic credentials, Oliver had a successful second career as a teacher.  She  taught at Case Western Reserve in her home state of Ohio; was poet in residence at both Bucknell University and Sweet Briar College, and spent nearly ten years at Bennington College in Bennington, Vermont.  She quietly mentored young writers, especially women, and published two admired non-fiction books about the art of verse, A Poetry Handbook and Rules for the Dance: A Handbook for Writing and Reading Metrical Verse.
Oliver seldom granted interviews or encouraged biographical exploration of her life.  She preferred to let her poetry speak for itself.  And so it does, in the great tradition of her most significant influences, Henry David Thoreau, Walt Whitman, and the woman some say she most resembles, the isolated and private Emily Dickinson.
When Death Comes
When death comes
like the hungry bear in autumn;
when death comes and takes all the bright coins from his purse

to buy me, and snaps the purse shut;
when death comes
like the measle-pox

when death comes
like an iceberg between the shoulder blades,

I want to step through the door full of curiosity, wondering:
what is it going to be like, that cottage of darkness?

And therefore I look upon everything
as a brotherhood and a sisterhood,
and I look upon time as no more than an idea,
and I consider eternity as another possibility,

and I think of each life as a flower, as common
as a field daisy, and as singular,

and each name a comfortable music in the mouth,
tending, as all music does, toward silence,

and each body a lion of courage, and something
precious to the earth.

When it's over, I want to say all my life
I was a bride married to amazement.
I was the bridegroom, taking the world into my arms.

When it's over, I don't want to wonder
if I have made of my life something particular, and real.

I don't want to find myself sighing and frightened,
or full of argument.

I don't want to end up simply having visited this world.