McHenry County got socked with the brunt of a major snow storm  Saturday night into Sunday morning.  At my place in Crystal Lake we got somewhere around 8 inches.  That’s a hell of a lot of digging out for the Old Man even with the help of Kathy Brady-Murfin, Daughter #3 Maureen Rotter, and stalwart Son-in-law Kevin Rotter.  By mid-morning we got it done and the Geezer was permanently retired from heavy snow shoveling on account of fear that my frozen corpse would be found after the next blizzard.  But I still had things to do.
So did about 150 other hearty, determined souls who were undeterred by snow, cold, and wind and came to the Women’s March on Woodstock Square.

Tens of thousands marched in Washington D.C., New York—where there were two competing marches—and scores of cities, towns, and hamlets many also facing harsh winter weather.
Two years after the original march was organized via social media which kicked off mass resistance to Donald Trump and all that he stands for, much of the media did not celebrate a continuing vibrant movement but fueled a controversy over alleged anti-Semitism.  Two leading Women’s March leaders, Linda Sarsour, who has criticized Israeli attacks on Palestinians in Gaza and on the West Bank and Tamika Mallory, who has maintained an association with Louis Farrakhan, leader of Nation of Islam.  Both women have repeatedly denounced anti-Semitism and have asserted that the Women’s March movement supports Jews and all victims of discrimination, marginalization, and physical attacks as part of the movement’s ideal of intersectionality in feminism.
Almost every news story running up the marches led with the controversy despite the impressive achievements of the movement in mobilizing women and their allies in the streets and in the voting booths.  Predictably, some of the major sponsoring organizations pulled support from this year’s Washington march including the American Civil Liberties Union (ACLU), Planned Parenthood Action, the American Federation of Teachers (AFT), the NAACP, Emily’s List, NARAL, the AFL-CIO, and the SEIU.  The Democratic National Committee also took a powder and nervous top office holders and prospective presidential candidates stayed away despite the undeniable success of the Women’s March to the Polls in contributing to November’s Blue Wave.
Others, including many prominent Jews, however, rallied to the support of the march as did many rank and file activists.  The boycott of the march was seen as an extension of alarming trends including attempts to criminalize advocacy for a boycott of firms with connections to Israel and its hard-core policies and the recent revocation of Angela Davis’s Birmingham Civil Rights Institute’s Fred Shuttlesworth Human Rights Award for her Palestinian sympathies when deep-pocket donors objected.
Most of the Marches outside of Washington are independently organized and not directly related the Washington leadership.  Some danced around the controversy.  Most plunged forward with the continued support of many of the organizations that abandoned the official march. 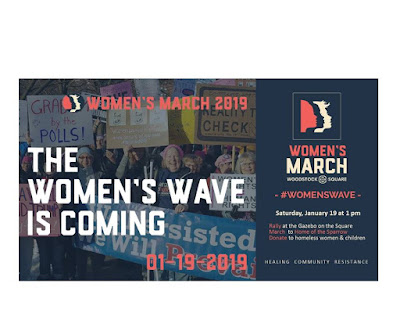 In Chicago, which had massive turn-outs in 2017 and ’18 and again for a Women’s March to the Polls event last fall, organizers opted out of a big march this January.  Although the decision was made not long after the March to the Polls because of the organizational burden of staging another mass event so quickly, much of the Chicago media tried to paint it as distancing itself from the Washington event.  The Chicago March had always been independent and has enjoyed excellent relations across all religions, nationalities, and ethnicities.
Regional marches were self-organized too take up the slack, including the one in Woodstock.

Cathy Johnson and Ruth Scifo organized almost overnight three bus loads from McHenry County to attend the 2017 Women’s March and five busloads in 2018.  They also were the prime organizer of the Woodstock March which also had the sponsorship of the Democratic Party of McHenry.  Despite the bitter weather an enthusiastic core of local activists showed up.

Scifo hosted from the Gazeebo stage while Johnson managed on the ground.  Speakers included Kelly Wegener, one of four Democrats elected to the McHenry County Board in November who “found her courage” to speak out and run from the Women’s Marches.  Also speaking was 6th District Congressman Sean Casten who acknowledged owing his surprise victory largely to the energy of women and who lauded his freshman class for its diversity and ability.  He took a strong line on the Cheeto-in-charge’s pet wall and the government shutdown.

While Casten spoke in Woodstock Lauren Underwood addressed the Fox Valley March in Geneva.
The Woodstock March also featured Patricia Wallace of Northern Illinois University, who spoke on women’s employment and workplace issues. A local attorney who frequently represents victims of domestic violence and whose name I did not catch recounted some of her experience and called for local police, prosecutors,  and judges who fail to uphold domestic violence law when faced with those with powerful white male privilege connections to be challenged and held accountable at the polls.
Illinois ACLU attorney Sapha Khatri of Chicago discussed progress in women’s issues but noted, “We need to make it clear to everyone we’re not going back…We need women represented at all levels of government. That’s how you get things done.” She was a living example that the national ACLU’s withdrawal form the Women’s March in Washington did not spill over to the independent regional marches.

A representative of Home of the Sparrow, a shelter for domestic violence victims continued the theme.  Organizers echoing calls for local social action requested participants in Woodstock to bring needed supplies, gift cards, and money donations.  The March, originally planned to circle the Square two times, was shortened due to the cold and participants marched directly from the Square to the Home of the Sparrow Thrift Shop at 120 N. Calhoun Street just a block and a half from the Square.
Despite the cold participants were warmed by the glow of community and a fire of commitment to recommit to broad social change for women and for all marginalized and abused people.

Posted by Patrick Murfin at 2:44 PM