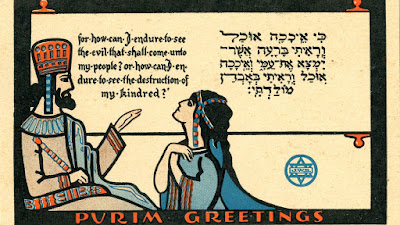 Last night at sundown the Jewish holiday Purim began and continues until tonight's sunset.  It is one of my favorite of all religious celebrations.  As a Rabbi who spoke last night at the Peace and Unity Prayer Vigil at Islamic Foundation North in Waukegan said. “Purim is a holy day when we are commanded to have fun.”  In the face of unspeakable tragedy born of hatred and bigotry at mosques in New Zealand his congregation was happy to forgo their own joyous celebration to join their Islamic brothers and sisters in solidarity and love.  But to that somber occasion, he and many members of his congregation brought the spirit of defiant joy with them.  After all the Muslim community had stood with them in the fearful dark aftermath of the Tree of Life Synagogue slaughter and the story of Purim is a tale of a people saved from destruction.


To familiarize folks with her story and the joyous festival which commemorates it—I’m talking to my fellow Goyim—we review just what the hell went on.


A young girl, Esther, is picked by a drunken Persian king to be his new bride.  She keeps her Jewish identity a secret.  Meanwhile her protector and cousin Mordecai discovers a plot to kill the king and by informing saves his life.


The King appoints the vain and treacherous Haman as his new Vizier.  Haman is offended when Mordecai is insufficiently obsequious to him in public.  Miffed, he plots to have not just Mordecai, but all of the Jews of kingdom killed.  He gets the king, who has been participating in public drinking festivals for six months and is perhaps a tad addled, to sign such a decree.


After sending words to the Jews of the kingdom to join in three days fast and prayer Esther gets the king drunk yet again at a royal drinking festival that she hosts with Haman among the guests.  After the first night of debauchery Esther reads to the King the annals of Mordecai’s life saving service.


She then asks Haman what boon the King should give to a man who has done him great service.  Vainly thinking she means him, Haman says the honoree should be dressed in the royal robes and paraded before the people on the king’s own horse.
The king astounds Haman by bestowing the boon on Mordecai and orders him to see that the command is carried out.


On the second night of the Festival Esther reveals that she is Jewish as is her cousin and that by the edict the king himself had signed all of her people, and she herself were marked for death.  Outraged, the king orders Haman hung on the gallows built for Mordecai and names the Jew as his new Vizier.
But he cannot revoke his own edict.  Instead he issues another which allows Jews to arm themselves and slay their attackers.  On the 13th Day of Adar the planned attacks are launched but the Jews slay their attackers by the hundreds and thousands, including all seven sons of Haman.


The Jewish people are saved and flourish for a while as never before in exile.


Purim celebrates the deliverance exuberantly with costumed recreations of the story, noise makers meant to drown out Haman’s name whenever it is read in the telling of the story, special foods, and, of course plenty of drinking and merrymaking.
Back in 2012 the celebration coincided with International Women’s Day on March 8.  This year the slippery Jewish lunar calendar missed that by nearly two weeks.


Back then I was intrigued because at the center of Purim is one of the few women of the Hebrew Bible or Old Testament to take a leading role in the story.  The lovely Queen Esther always struck me as wonderfully subversive and feminist.  The story of Esther, heroine and savior of her People, resonates with women whether Jewish or Gentile.


So I wrote her a poem imagining her sitting down with some contemporary sisters.


tumbling to those lovely shoulders


that had enticed a lecher King.


Her people, the Women of another age,


She cast her blazing eyes upon them,


and spoke at last.


“So many Hamans.  Where shall we begin?”