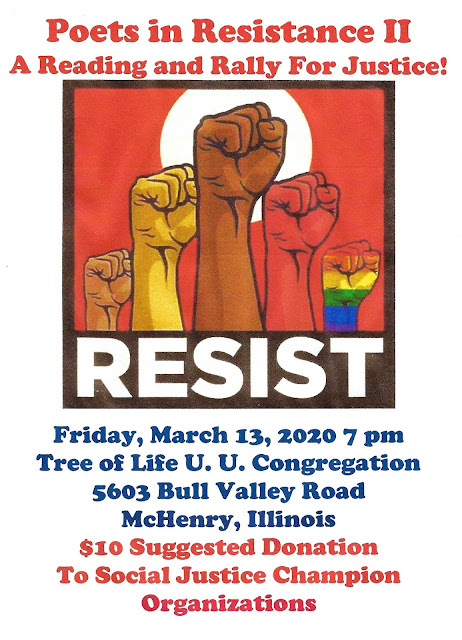 The Social Justice Team of Tree of Life Unitarian Universalist Congregation, 5603 Bull Valley Road in McHenry, presents Poets in Resistance II, a public reading and rally on Friday, March 13 from 7 to 10 pm.
The first Poets in Resistance program was held in March of 2017 and was one of the most successful public events that Tree of Life has hosted.  The program also harkens back to a Poets Against the War reading, part of a global movement of poets, to protest the invasion of Iraq by the Bush administration at the old Congregational Unitarian Church in Woodstock.
It has been the historic mission of poets to be the prophets, Cassandras, and voices for the voiceless often in defiance of authority and at great personal risk. Now perilous times, climate disaster, war, oppression, and existential threat to democracy demand that those voices be heard again.
And people around the world have been listening and inspired.  A 2019 article in The Guardian noted that “Poetry sales soar as political millennials search for clarity…driven by younger readers, with a hunger for nuance amid conflict and disaster.”   Although the article was specifically referencing the United Kingdom, the same phenomena can easily be observed in the United States as poetry has burst out of academia and elite literary circles to be reclaimed by the people.  Alternative venues like poetry slams, hip-hop shows, and street rallies and demonstrations and media including web sites, blogs, social media, and simple and inexpensive e-publishing have contributed to the boomlet.
Here in McHenry County regular events and reading by the Atrocious Poets, at Stage Left in Woodstock, the Hidden Pearl in McHenry, at McHenry County College, and formerly at the Raue Center for Performing Arts in Crystal Lake, have developed both local poets and nurtured an audience for verse that was unimaginable a few years ago.
Poets around the world have been responding to these challenges and have been jailed, beaten, and even assassinated or executed for speaking out in places like Israel and occupied Palestine, China, Russia and other former USSR nations, Iran, Iraq, Afghanistan, an in parts of Africa and Latin America.  They are the insuppressible voices of refugee and immigrants, the generations who will inherit climate catastrophe, indigenous women others facing abuse and exploitation.
In America, aside from sometime vicious and threatening on-line bullying, heckling, and occasional stabs at censorship by schools and attempts to coerce libraries by right wing politicians and their minions, poets still enjoy relatively safe and open speech.  But the rise in authoritarianism at the highest level of the Federal Government and an emboldened fascist and White nationalist and supremacist movement means this window of free expression might soon be closing.  The best way to combat that threat is by doubling down and amplifying our prophetic voices.
Poets in Resistance II hopes to feature poetic voices of all ages, gender identifications, races, ethnicities, and spiritualties and of poetic styles including poetry slam, hip-hop, performance art, observational, personal reflection, traditional, rhymed, unrhymed, and quirky.


Philip Charles Denofrio, Terry Loncaric, and Sue Rekenthaler.  The program will be hosted by Patrick Murfin.  Additional slots are still available and interested poets should contact Murfin at pmurfin@sbcglobal.net or at 815 814-5645.

The event will be free and open to the public but those in attendance are urged to “vote” by making voluntary donations of $10 or more to any or four organizations representing grass roots resistance—Extinction Rebellion U.S., the youth-led climate activists inspired by Greta Thunberg; March for Our Lives, the student-led anti-gun violence organization first organized by survivors of the Parkland High School shooting; No More Deaths which provides humanitarian aid to border crossers and whose members and supporters have been prosecuted for their life-saving work; and Black Lives Matter Chicago, an intersectional movement that values Black people and the right to self-determination fighting for justice for families impacted by police violence and other oppression.