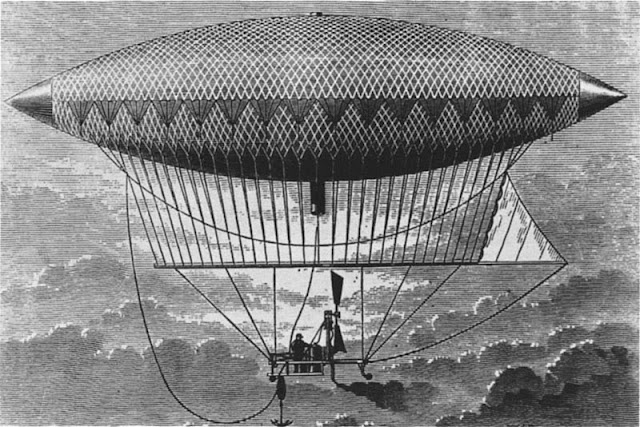 Regular readers of this blog may have noticed a recurring interest in innovations in transportation and communications—the things that have tended to tie together our shrinking world.  But sometimes I am stunned to discover an innovation years—decades—before I ever suspected.  Take the notion of powered flight—the ability to propel and control some kind of aircraft over a distance by a mechanical engine.  I assumed that it would require some sort of internal combustion engine.  I never even considered the possibility of steam—the engines themselves were heavy and required quantities of water and fuel, not to mention the inherit dangers of fire, heat, and flying cinders.

So imagine my astonishment to discover that just such a flight occurred on September 24, 1854 and that powered flight was just one of several innovations. 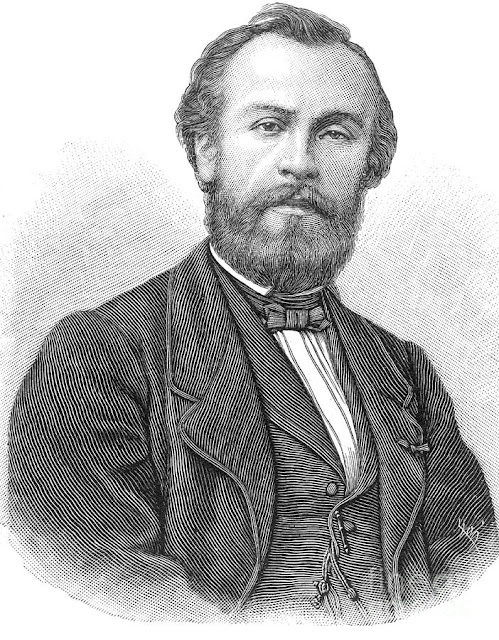 That year Henri Giffard was a 27 year old French engineer.  Two years earlier he had his first experience with lighter than air craft when he collaborated with another engineer named Jullien to build an airship with a propeller driven by clockwork.  That craft had an elongated hydrogen filled balloon with ends that tapered to points.  But the clockwork propeller could not generate enough energy to move the balloon very far in perfectly still conditions—or for very long until the engine wound down.  It was also lacked any means of steering or controlling the movement of the flight.  But the effort had showed that a propeller could indeed, propel if a reliable source of power could be found to turn it.

In 1851 Giffard patented the “application of steam in the airship travel” and a year later built a remarkable small engine weighing just 250 pounds with a boiler and fuel—coke—that added another 150 Lbs.  That was light enough that a gas envelope could be built capable of lifting it plus the weight of a single passenger/operator. Giffard built the first ever true dirigible—a term derived from a French word meaning steerable.  That meant an airship with a semi-rigid gas envelope as opposed to an inflatable bag, that could move under its own power, and that could be maneuvered.

The engine was just one of Giffard’s innovations.  It produced 2,200 watts or three horsepower to turn a three-bladed, rear mounted pusher propeller.  To put it in perspective, that is about the same power as generated by a modern steam iron, but it was enough.  The engine was mounted on a platform along with the operator which was suspended from a long beam slung below the 144 foot long envelope.  At the rear of the beam was a moveable triangular sail that acted as vertical rudder enabling the aircraft to maneuver.

The trickiest problem was what to do with the cinders that would inevitably escape the combustion chamber and rise imperiling the highly flammable hydrogen in the envelope.  Giffard devised a long exhaust tube that pointed down and behind the engine instead of a top mounted smokestack common in steam engines.  That directed sparks down and away from the envelope and hopefully the forward movement of the air ship would be fast enough to keep them from rising to the rigid bag.  All in all it was a remarkable construction.

Giffard took off from the Paris Hippodrome and flew 17 miles to Elancourt, near Trappes in three hours for an average speed of six miles per hour.  Along the way he made several turns and even flew in short circles to prove that his ship was controllable.  The original plan was to take on more fuel and water and return to Paris.  But Giffard found that his engine was not powerful enough to move the ship against even a light headwind. 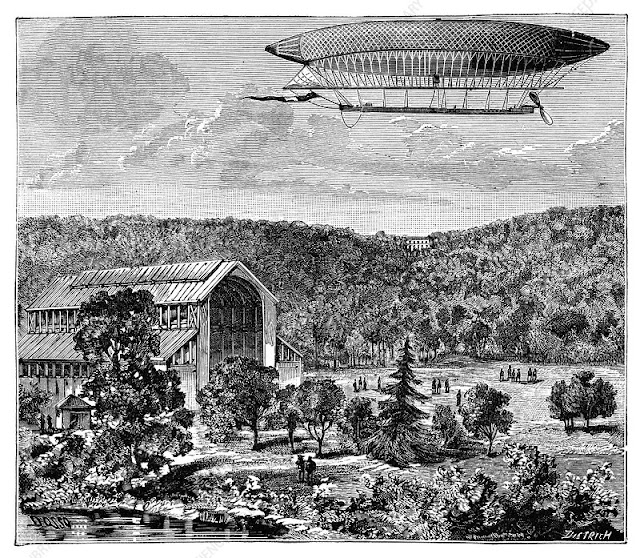 Battery powered  La France on her demonstration flight in 1884.

The Giffard Dirigible never flew again.  Attempts to improve on it were stymied by the additional weight of steam engines powerful enough for practical use.   The future of the Dirigible had to wait until the development of light and practical engines.  In 1872 Paul Haenlein flew a hot air craft—a blimp—with an internal combustion engine running on the coal gas used to inflate the envelope.  The La France was launched for the French Army by Charles Renard and Arthur Contantin Krebs in 1884 propelled by a battery powered electric motor.  In its maiden five mile flight it became the first airship ever to complete a round trip.

A hydrogen-lift dirigible powered by the first use of such an internal combustion engine had to wait until 1888 when Dr. Frederich Wölfert built an airship powered by Daimler Motoren Gessellschaft gasoline engines, 36 years after Giffard.

As for the inventor, he had more innovation in him.  In 1858 he invented the injector, a type of pump that uses “the Venturi effect of a converging/diverging nozzle to convert the pressure energy of a motive fluid to velocity energy which creates a low pressure zone that draws in and entrains a suction fluid.”  Don’t ask me what that means—it’s all engineering Greek to me, but trust me it was an important technological breakthrough and made Giffard a very wealthy man. 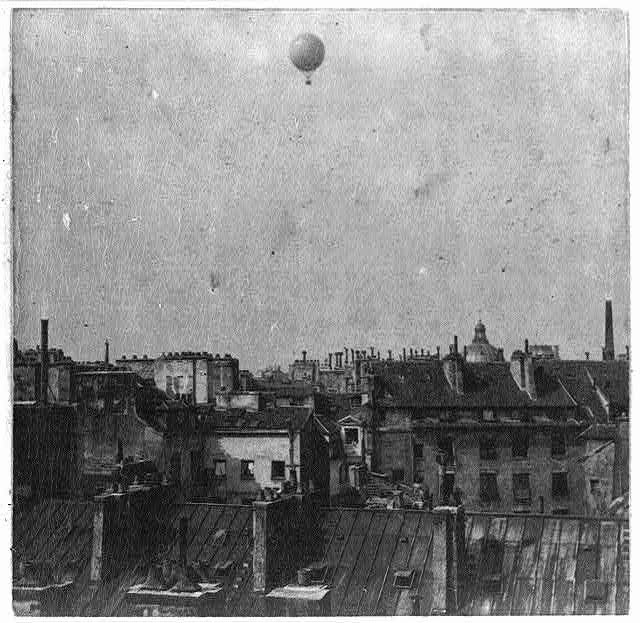 Giffard was photographed over Paris in a captive hydrogen balloon in 1877.

In fact, he became something of a national hero for that and was made a Chevalier of the Légion d’ honneur in 1866.  And he was not done with playing around with lighter-than-air-craft.  In 1876 he made a famous tethered flight over Paris in a hydrogen balloon which was captured in a famous early photograph.

Despondent over declining health, Giffard committed suicide on April 14, 1882.  He left his fortune to the people of France to be used for humanitarian and scientific causes.  He was so esteemed by his countrymen that he is among the 72 great notables whose names are inscribed on the Eiffel Tower.