A Blast From Christmas Past—Remembering a Favorite Old Story 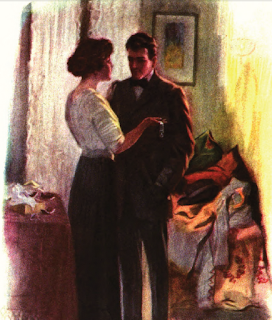 Note:  Part of my day job is drafting letters to be sent to clients and prospects.  We sent an abbreviated version of this out last year as the company Christmas letter.  I’m resurrecting my original draft.
So many stories, poems, films and songs make annual reappearances during the holiday season.  Many are like old friends we welcome back into our homes.  You know, the ones you look forward to each year—A Christmas Carol, A Visit from St. Nicholas (The Night Before Christmas), or a television cartoon like A Charley Brown Christmas.  But sometimes an old friend seems to disappear.  It can take a few seasons to realize it is missed.
The last few years I have missed The Gift of the Magi.  The short story by O. Henry (William Sydney Porter) was published in the New York World Magazine in 1906 and quickly seemed to become a perennial favorite.  Not only was it reprinted and anthologized, because of its taught structure it was perfect for adaptation for radio and then television.  Some years multiple productions were aired. Maybe the most famous adaptation was as a segment in a Twentieth Century Fox anthology film, O. Henry’s Full House narrated by John Steinbeck and staring Jeanne Crain and Farley Granger in 1952.
Perhaps it is not surprising that the story has faded.  Christmas tales and entertainments these days tend toward the magical and musical.  Santa Claus and various magical helpers are everywhere and even popular re-tellings of classic tales seem to require big production numbers.  On the other hand, a counter-cultural trend calls for reverently Christian tales that “put the Christ back in Christmas.”  The Gift of the Magi fails on both counts.


It is a very simple tale.  Perhaps you remember it.  A young married couple, Jim and Della, are about to celebrate their first Christmas together.  But times are hard.  They live in a dingy, one room New York City apartment.  Jim’s employer has slashed his wages by a third to only $20 a week —hardly enough to pay the rent and put food on the table.  The frugal Della has managed to save a grand total of $1.87 — most of it in pennies — by weeks of haggling with the grocer, butcher, and baker.  It’s Christmas Eve and she is miserable that she can’t buy Jim a nice gift for Christmas.  Catching sight of herself in a mirror she unpins the hair majestically piled on her head.  Down cascades a glory auburn of tresses.


The narrator of the tale observes that “…there were two possessions of the James Dillingham Youngs in which they both took a mighty pride. One was Jim's gold watch that had been his father's and his grandfather's. The other was Della's hair. Had the queen of Sheba lived in the flat across the airshaft, Della would have let her hair hang out the window some day to dry just to depreciate Her Majesty's jewels and gifts. Had King Solomon been the janitor, with all his treasures piled up in the basement, Jim would have pulled out his watch every time he passed, just to see him pluck at his beard from envy.”
Della runs from the apartment and sells her hair for twenty dollars.  With it she searches until she finds the perfect gift for Jim — a simple, tasteful platinum watch fob to set off his treasured time piece.  Hurrying home, she tries to make herself presentable until “her head was covered with tiny, close-lying curls that made her look wonderfully like a truant schoolboy.”  She sits and waits on Jim’s return from work promptly at 7 PM.
When Jim comes in he is stunned speechless.  Della believes he hates her for cutting her hair.  But after stammering a bit, he owns that no hair cut could harm his love for her, but that he was embarrassed because of his gift to her—a pair of tortoise shell hair combs decorated with jewels that Della had long admired in a Broadway shop window.  After promising that her hair will grow again, she offers Jim her treasure.  He looks at it and plunks down on the couch saying, “let’s put our Christmas presents away and keep ‘em a while. They’re too nice to use just at present. I sold the watch to get the money to buy your combs…”
The story closes with the musings of the narrator:
The magi, as you know, were wise men — wonderfully wise men — who brought gifts to the Babe in the manger. They invented the art of giving Christmas presents. Being wise, their gifts were no doubt wise ones, possibly bearing the privilege of exchange in case of duplication. And here I have lamely related to you the uneventful chronicle of two foolish children in a flat who most unwisely sacrificed for each other the greatest treasures of their house. But in a last word to the wise of these days let it be said that of all who give gifts these two were the wisest. O all who give and receive gifts, such as they are wisest. Everywhere they are wisest. They are the magi.
May the spirit of this old tale, in all of its simplicity, live in your heart this Holiday Season.

Posted by Patrick Murfin at 7:07 AM

Email ThisBlogThis!Share to TwitterShare to FacebookShare to Pinterest
Labels: Christmas, O. Henry, short story, The Gift of the Maji