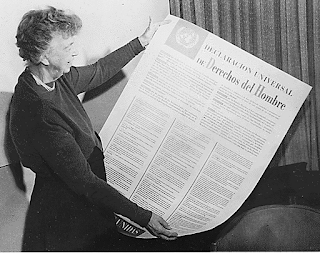 Today is International Human Rights Day which commemorates the adoption by the United Nations General Assembly meeting at the Palais de Chaillot in Paris of the Universal Declaration of Human Rights on December 10, 1948.  The vote was 48 ayes, 0 nays and 8 abstentions.  The abstentions came from the Soviet Union, the Ukrainian and Belorussian S.S.R.s, Yugoslavia and Poland, as well as South Africa, and Saudi Arabia.
The Declaration was an outgrowth of the bitter lessons of World War II and President Franklin D. Roosevelt’s Four Freedoms which had become the foundation and promise of the alliance against the Axis Powers known at the United Nations.  As the war drew to a close, the United Nations was Chartered as new international body to replace the failed League of Nations.  From the beginning codifying international standards for rights was a priority.
Canadian legal scholar John Peters Humphrey, Director of the Division of Human Rights within the United Nations Secretariat, was selected as the principle writer.  He worked closely with a commission chaired by Eleanor Roosevelt, a tireless advocate for a strong declaration.  Members of the commission were selected from a representative cross section of UN members—Australia, Belgium, Byelorussia, Chile, China, Egypt, France, India, Iran, Lebanon, Panama, Philippine, United Kingdom, U.SA, Soviet Union, Uruguay and Yugoslavia.
Humphrey produced a draft which became the working document with details to be haggled over.  Besides Mrs. Roosevelt,   Jacques Maritain , René Cassin and Stéphane Hessel all of France; and Charles Malik, a Lebanese Christian;  and China’s P. C. Chang played leading roles in working over Humphrey’s texts.
There were numerous struggles in the commission, particularly over objections of Islamic countries over the rights of women, marriage, and the freedom to change one’s religions.  The Soviet Union and its allies and vassal states fought furiously against enshrining individual liberties “at the expense of common necessity.” And conservative Western governments we just as adamantly opposed to including social, economic, and cultural rights.  Mrs. Roosevelt played a key role in patching over differences and coming to a conclusion.
None the less, after months of work within the commission the General Assembly debated almost every point and held more than 1,400 votes on virtually every word and clause in the document before it was ready for a final vote of approval.
In 1966 the UN General Assembly adopted two detailed additional Covenants on Economic, Social and Cultural Rights, and on Civil and Political Rights, which were ratified by sufficient numbers of member states by 1975 to become international law.  The Universal Declaration of Human rights along with the two covenants are now considered the International Bill of Rights.
The documents, taken together, are important in and of themselves.  But in practice member nations have seldom been willing to challenge the national sovereignty of member states known to be violating the terms of the agreements and perpetrating even the grossest of Human Rights abuses.
In the midst of a global economic crisis and regional ethnic and religious turmoil, Human Rights are under constant attack.  And the United States, which once proudly proclaimed them, now prefers to cite American exceptionalism for permission to observe them in the breach.  Congress is currently considering measures that could lead to virtual martial law and allow for the indefinite detention of American Citizens and legal immigrants without charge or trial.
May the ghost of Eleanor Roosevelt haunt the dreams anyone who collaborates in this effort.
Posted by Patrick Murfin at 8:19 AM