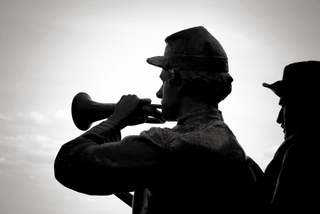 Observing Memorial Day was always a solemn obligation.  I learned that from my Dad.  He made sure that we attended the ceremonies of his American Legion Post in Cheyenne, Wyoming.  He would patiently explain the significance of each part of the ritual.  We were carefully instructed when to stand at attention with our hands or hats over our hearts and not to flinch when the color guard fired.

And I repeated the process for my children and grandchildren.  For many years I took them to the parade and memorial service in Crystal Lake.  When Maureen was little, we piled her in a Radio Flyer wagon and Kathy and I would walk with the big girls—and sometimes various cousins—the mile or so from our  house down Woodstock Street to Union Cemetery next to the Fire Station.  We would wait along the street for the parade to arrive and turn into the Cemetery.  I would often buy the girls small American flags with instruction not to let them touch the ground.

The parades themselves were never much as parades go.  No floats or people tossing candy to the kids.  Led by wailing sirens of Police motor cycles, the lead Color Guard was usually from the military—most often from near-by Great Lakes Navy Base, followed closely by the Legion and VFW.  For some years the local chapter of VietNow had a smart drill team with flags.  Of course there were the high school marching bands, a little uncertain and unsteady with the loss of their seniors days earlier to graduation.  On hot days, they shed their wool uniforms and shakos for t-shirts.  There were open cars with local politicians and dignitaries—the last local survivor of World War I got a great round of applause, as did that years’ Little Miss Poppy.  The rest of the parade featured Boy Scout Troops, Cub Scout Dens, Girl Scouts and Brownies, Camp Fire Girls, the 4-H, and all of the local T-ball and Little League teams.  Over the years the kids, and then the grand kids all got to march at least once.  The whole parade never took much longer than 15 minutes to pass us with the Fire Department trucks bringing up the rear with more blasts of air horns and sirens.

The parade would swing into the broad drive of the Cemetery leading to the tall Civil War Monument.  The Color Guards, bands, and marching groups would array themselves in an arc around the statue with us members of the public spread out among the grave stones.

An elderly Legion or VFW member would step to a microphone and try to get the attention of the crowd over a popping and inadequate PA system.  A Chaplain would intone a prayer.  The Bands would play the Star Spangled Banner and a Color Guard would raise the flag and the lower it to half staff.  Someone would read General Logan’s order to the Grand Army of the Republic establishing an annual day to decorate the graves of the fallen.  The bands would play a patriotic selection and a local dignitary would deliver a droning address no one could quite hear.  Wreaths would be presented to the Monument by the Legion, VFW, VietNow, the Auxiliaries and the Poppy Princess.

Then the Color Guard and the Firing Squad would return.  The Flag was slowly raised back to the top of the mast and the Squad fired three ragged volleys, frightening many of the children. A lot of years some of the old soldiers could not get their rifles to fire and the men fumbled with the bolt actions to try to clear them.
Then a bugler would strike up Taps.  As he finished a second bugler far back in the cemetery would strike the mournful echo.  However clumsy the rest of the ceremony might have been, this was the moment when my throat caught and my eyes always watered.

The bugle call Taps hat its origins, like Memorial Day itself, on the battlefields of the Civil War.  Union Brigadier General Daniel Butterfield, who commanded the 3rd Brigade of the 1st Division in the V Corps of the Army of the Potomac while at Harrison’s Landing, Virginia in July 1862.  The general was unhappy with a French bugle call then used by the Army.  He tinkered with another call known as Scott’s Tattoo, named for long time Army Commanding General Winfield Scott.  Butterfield’s arrangement was first played by his bugler, Oliver W. Norton, of Erie, Pennsylvania to signify the end of the day at his brigade camp.

The new tune was so popular that it was soon replacing the regulation “lights out” call among both U.S. and Confederate troops.

It is unclear when it began being used at funerals, but the association of death and going to sleep was a natural one.  When the Army finally officially adopted the call for its buglers in 1874 it was approved for both uses.

By the way, the Army takes a dim view of “Echo Taps” and specifically bans the use of a second bugle as “an inappropriate use of bugle” in military funerals and ceremonies.  It is popularly used, however, as in Crystal Lake, by civilian musicians.

The massive die off of World War II and Korean War veterans now running to dozens every day has put a strain on the capacity of the armed services to provide buglers for all grave side.  Many now are conducted with recorded renditions of Taps.
Posted by Patrick Murfin at 2:00 AM