Greed and Stupidity Motivated the Worst Baseball Deal of All Time 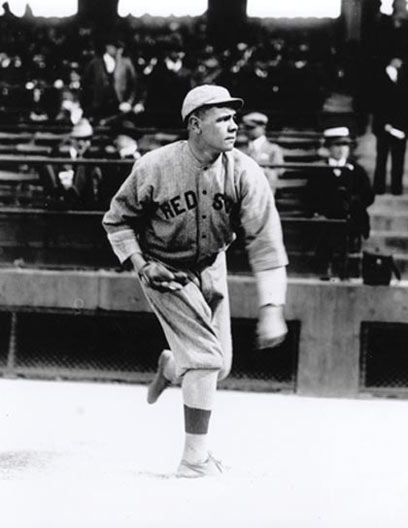 Nothing takes the chill off of a cold winter day like a good baseball story.  And today is the anniversary of a story that has kept the Hot Stove League buzzing for more than 90 years.
On January 3, 1920 Boston Red Sox owner Harry Frazee dealt his most valuable asset, a 24 year old pitcher named George Herman Ruth.  Ruth had blazed into the big leagues as a phenom from a Baltimore home for delinquent boys.  In his years with the Red Sox compiled a record of 89 wins and 46 losses.  In 1919 he had an ERA of only 2.19.  He had helped get the Boston team the win World Series titles in 1915, ’16, and ‘18.  Among his many pitching records was a 29 2/3 consecutive scoreless innings in Series play, which endured until Whitey Ford finally bested the mark in 1961.  Another long held record was the most shut-outs by a lefty in a single season—9—which lasted until Ron Guidry tied it in 1978.
And if that wasn’t good enough, Ruth, now called The Babe by an adoring Boston press for child-like moon face, was emerging as an astonishing power hitter.  In a dead ball era when homeruns were scarcer than hen’s teeth and triple plays, Ruth slammed 11 in 1918 with a batting average of .300.  Needless to say, in 1919 the Red Sox began using him in the outfield on days when he wasn’t pitching.  His homerun record soared to 29 with a .323 batting average.
So it was with shock and horror that Boston fans discovered that their star player was being sent to the lowly New York Yankees for a pile of cash and a big loan secured by the mortgage to Fenway Park.  Despite the success of his team, Frazee was considered a gad-fly and a pariah among Big League owners.  He often used the team’s assets—including top talent—to finance his other business interests including real estate speculation and being the angel for Broadway productions.
Ruth’s contract was coming up and he was demanding—with justification—a big pay raise that Frazee did not want to pay.  In addition the two had been at odds over Ruth’s insubordination and reckless off-field activities including heavy drinking a carousing with floozies who were not his wife.  The  Frazee was offered the opportunity to back a new play that he felt sure would make him richer.
Despite Ruth’s talent, only two teams bid for a trade.  The White Sox, the American League’s other dominant team offered Shoeless Joe Jackson.  But Frazee needed cash.  Yankees owners Jacob Ruppert and Tillinghast L'Hommedieu Huston offered an all-cash deal for $100,000--$1,100,000 in current dollar terms.  Frazee got $125,000 up front and three $25,000 notes payable every year at 6 percent interest.  He also got a loan secured by Fenway for an additional $300.000.
Frazee took the cash and plunked it down on a frothy Broadway comedy, My Lady Friends.  The play was a moderate success, but would be forgotten today if it did not become the basis for the musical No, No Nannette which premiered in 1925.
By that time Babe Ruth was comfortable ensconced in the New York outfield.  1925 was an off year.  He hit only 25 homers.  No matter.  Two years later he would set his record 60 four-baggers.  In his 15 years with the Yankees Ruth would tally a total of 659 home runs and hit .349.  He led the Yankees to four World Series Championships in 1923, 1927, 1928, and 1932.  He was so successful that the team erected Yankee Stadium—“The House that Ruth Built.”  He was a unanimous choice for the first class of the Baseball Hall of Fame.
The Red Sox did not fare so well.  Despite having some super star players like Ted Williams and several close brushes with ultimate victory, the team did not win a World Championship until 2004.
However no one seems to have mentioned a Curse of the Bambino until Boston Globe sportswriter Dan Shaughnessy popularized the idea in a 1990 book.  It then became the perfect peg for stories by lazy writers and broadcasters looking for extra “color.”  By the end of the decade talk of the curse had become ubiquitous.


But despite the foolishness of Frazee, there never was a Curse of the Bambino.  Just as there is not, repeat NOT any damned Billy Goat curse at Wriggly Field.