What We Really Know About Lincoln and Faith 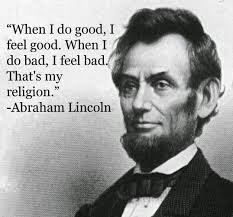 Note:  This piece is a re-tread, but the issue keeps bobbing to the surface as claims are made about the Faith, or  lack thereof, of our most admired President.  Lately the New Atheists have made their bid to appropriate him on just as shaky ground as the older claims of Evangelicals.  Meanwhile I am betting at least one sermon this month at a UU congregation claims him “at least in spirit.”


Back in 2009 the nation was in the grip of a wave of Lincoln mania in conjunction with the bi-centennial of his birth.  There was an avalanche of new books and articles examining every aspect of the Great Emancipator’s life, work, and connections.
The Religious Right—those who were not also neo-Confederates any way—was busy, as usual, trying to retroactively adopt him as an Evangelical Christian.  On the other hand the small world of the Unitarian Universalist blog-o-sphere and a spate of sermons, tried to lay claims that Lincoln was, at least in spirit, a Unitarian or a Universalist.
Scott Wells, a leading Universalist and Christian blogger from a Southern background claimed to be immune to the cult of Lincoln worship.  For his family Lincoln represented oppression, destruction, and, for them, the nightmare of Reconstruction.  He also scolded U.U.s for trying to appropriate Lincoln into our ever popular lists of famous UUs.
The following is adapted from my response to Wells.
Hagiography aside, there are many reasons to put your understandable regional bias aside and spend some time studying Abraham Lincoln. As flawed and inconsistent as any man, he is still rewarding for the subtlety and depth of his thought and his life long struggle to reconcile a true and deeply held idealism with both personal ambition and the need to act in a brutal and unforgiving environment. Even Harry Truman, a Missouri Democrat whose unreconstructed Confederate mother never forgave him for making Lincoln’s Birthday a national holiday, came to deeply admire his ancient tribal enemy.

Lincoln’s relationships to religion are not a murky as some suppose. Certainly any denomination that would attempt to claim him as its own is self-delusional. Here is some of what we know.
1)   At no time in Lincoln’s life did he ever claim to be a Christian as understood at his time or to be saved.
2)  As far is known he was never baptized and never became a member of any church.
3)  Among his earliest published writings were attacks on a political rival, Peter Cartwright who was a fire-and-brimstone Methodist circuit rider who had accused Lincoln of infidelity and had used his wide Methodist connections to build a Democratic political operation.  The articles, which appeared under a nom de plume, mocked both the man’s religion and his attempts to use his followers as a political base.  Lincoln claimed never to have “denied the truth of Scripture” but did acknowledge that he was not a church member.  Lincoln defeated Cartwright for a seat in Congress, but Cartwright’s charges—and his own tart responses—would dog him for years.
4)   Like most self-educated Americans who had literary aspirations and who were not versed in the Latin and Greek of the Eastern college educated elite, Lincoln had two primary sources to draw from for both inspiration and style—The King James Version of the Bible and the popular plays of William Shakespeare. He knew both. But his writing was infused with the cadences and majesty of the Bible. He could also, if the occasion called for it, usually in response to some hypocrisy from the mouth of a believer, quote verse with ease.
5)  He deeply admired Thomas Jefferson and treasured the Declaration of Independence as the essential founding document. He borrowed from Jefferson, and from George Washington, the language of Deism in public discourse. He frequently spoke of Providence, Creator, and other Deist constructions. He did not avoid the word God, but he did not invoke an explicitly Christian God. One can search in vain for much use of the words Christ or Savior outside of the context of letters of condolence to the families of fallen soldiers often echoing back sentiments expressed by the bereaved. He was all for giving whatever comfort he could.
6) In Springfield he attended Mary’s Presbyterian Church and was friendly with its minister but never joined the church or partook in the Spartan Presbyterian communion.  That hasn’t stopped that congregation from calling itself “Lincoln’s Church” to this day.
7) He read the published sermons of both William Ellery Channing and Theodore Parker and appropriated or adapted words from each—especially Parker—in his speeches. But in practice as President, despite a personally cordial relationship with Radical Republican Senator Charles Sumner, he found Abolitionist Unitarians to be pig-headed impediments to a practical prosecution of the war and a move toward healing a post-war, re-united country.  Despite this the UU congregation in Springfield proudly adopts his name.
8) He believed deeply and viscerally in Fate and implacable Destiny. This was part and parcel of his widely reported melancholia. Some scholars have attributed this to a sort of Calvinist hang-over. Could be. But Lincoln’s sense of fate and destiny seem to rise from far more ancient impulses.


9) There is nothing to connect Lincoln to institutional Universalism. Steven Rowe at A Southern “Universalist Church” History responded to Wells with an excerpt from memoirs by Universalist minister quoting appreciative comment by Lincoln:
“I used to think that it took the smartest kind of man to preach and defend Universalism; I now think entirely different. It is the easiest faith to preach that I have ever heard.  There is more proof in its favor, than in any other doctrine I have ever heard. I  have a suit in court here to-morrow and if I had as much proof in its favor as there is in Universalism, I would go home, and leave my student to take charge of it, and I should feel perfectly certain that he would gain it.” Such were his words.
Unfortunately there are no other witnesses to Lincoln attending the debate described or speaking this assessment of it.  And I am sure a diligent search of the memoirs of ministers of other denominations can turn up appreciative Lincoln quotes, some perhaps true, others the product of devout wishful thinking.  Yet there is much to suggest that Lincoln privately embraced a kind universalism of spirit that accepted a common struggle for understanding a greater mystery that transcended mere denominationalism.


10) In the White House, with the gruesome burdens of a war-time presidency on his shoulders and the private grief over the loss of his beloved son Willie, Lincoln followed Mary’s lead and seemed to take Spiritualism, then at the height of its American popularity, with due seriousness. At the time many Universalist ministers were also toying—to considerable controversy—with Spiritualism. But again Lincoln never publicly endorsed Spiritualism, or acknowledged it as his faith.
In the post-war years both the Abolitionist preachers with whom he sparred during the war and a generation of new Unitarian leaders bloodied on the battlefields of that war—Jenkin Lloyd Jones being a prime example—participated in the myth making that turned the martyred President into a kind of a Saint. They went too far. And rubbing the defeated South’s nose in it exacerbated the regional disdain with which you grew up.
But I think many modern Unitarians and Universalists can find much with which to resonate in Lincoln’s personal spiritual journey.  It so resembles so many of our own.