Note—I rediscovered this post from 2011 as I was reviewing what I have written on this date.  Although the incident that sparked the rant, and its hapless victim, have long been forgotten, the same shit still passes for justice in these parts.  The city of Woodstock just criminalized smoking in the Square or being found there overnight, ordinances aimed squarely at the two most despised groups by the powerful merchants, bar, and restaurant owners downtown—the homeless and teenagers.  As sure as I am typing this people will be going to jail for not being able to come up with the fines or for missing court dates.  They are still bursting with pride and handing out cigars at this civic cleansing.

Well not, exactly just in, but I only saw it yesterday in Tuesday’s Northwest Herald, the paper of record for McHenry County.  It was just a short piece buried on page three of the Local & Regional section.  To wit:

WOODSTOCK – A 58-year-old Pistakee Highlands woman was in serious condition Monday night in a Rockford hospital after she was injured falling down a set of stairs at the McHenry County Jail.

Leslie Lutzow, who lives in the unincorporated area northeast of Johnsburg, was in the neurointensive care unit at OSF St. Anthony Medical Center on Monday afternoon, nurses at the hospital said.

McHenry County Undersheriff Andrew Zinke said Lutzow was arrested six days ago on a disorderly conduct charge. Her bond was set at $100.

“She was in her housing pod walking up to the second tier when, for an unknown reason, she appeared to lose her balance and fall down the stairs,” Zinke said. “There were no signs of foul play. Nobody was around her when it occurred. She was immediately treated and transported for medical care.”

Lutzow tumbled down between 20 and 30 stairs. She suffered a head injury.

Lt. Brendan Parker of the Woodstock Fire Rescue District said personnel were dispatched to the jail at 4:27 p.m. Sunday.

“The crew got there and determined the patient needed to be taken to a Level 1 hospital,” Parker said. “The patient was flown to St. Anthony’s.”

I was on the bus to work when I read this.  My blood pressure shot up so high that my eyeballs nearly popped out of my head. 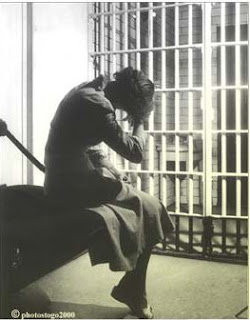 Look, I don’t know anything at all about Ms. Lutzow or the exact nature of the heinous deed that kept her in jail for six days on a disorderly conduct charge for want of $100 bail money.  I do know that clinging to life in ICU, she is still a prisoner and if protocols have been followed may be handcuffed to her bed.

I do know a few general things.

First. the lady comes from Pistakee Highlands.  This is not estate territory.  Much of the area is made up of vacation cabins, many more than 50 years old, which have been converted to year round residences.  A lot of the places are worse for the wear.  It comes as close as anything in McHenry County to fitting the definition of a rural slum.

So chances are Ms. Lutzow is not exactly rolling in dough.

I know that she is 59 years old but apparently had no one to put up $100 to spring her from the calaboose.  So she probably has no close family or friends.  May be they all died, or moved away, or are estranged.  Maybe she is an ornery old woman who no one wants to be around.  Or maybe she is just one of those sad, lonely people who eke out little noticed existences on the edges of society.  You know, an Eleanor Rigby.

I know that disorderly conduct can mean just about any damn thing.  It is  a charge commonly brought against obstreperous neighbors, belligerent drunks who get thrown out of saloons, people who quarrel with gas station clerks over petty grievances, people who play Iron Butterfly too loud at 3 AM, people whose dogs bark, folks who have noisy fights with family members, those that wander the streets talking to themselves and gesturing wildly, people traveling in cars with someone busted for something more serious, and anyone who did anything to mildly irk a cop.

You can be fairly certain that no one was injured or that no serious property was damaged if disorderly conduct was the only charge—in McHenry County the policy is always to charge to the max, if possible for multiple violations.  A lot of folks who run afoul of disorderly conduct charges—not all, mind you—have problems with alcohol or drug abuse, have mental health issues and are often off of or unable to afford medication, or are  in some way developmentally disabled.

Ms. Lutzow might be a thoroughly annoying and unpleasant person who her neighbors do not mind seeing off of the streets.  She might have been in and out of jail for this kind of thing before.  Or maybe she just had a bad day or was at the wrong place at the wrong time.

The thing is, why was she in jail at all for the pettiest of all offenses and a want of a lousy C note?

Because McHenry County makes it a routine policy to criminalize the poor and marginalized.  It’s good politics.  Everyone gets to puff their chests out and brag about how tough they are on crime, even an ethically challenged States Attorney who barely beat a rap of his own and a Sheriff who mostly lives in Florida.  Judges up for retention elections won’t have to worry about be painted as soft on crime.  Cops and Deputies meet arrest quotas and find a way to get back at anyone who looks cross eyed at them.  See, everybody wins.

Except, of course the poor, but who gives a rats ass about them anyway.  Get ‘em off the street and out of sight, make it so tough on them that they will go to Chicago or some other rat’s nest of Democrats and thieves.

Most places in Illinois, even most of the other Collar Counties with similar demographics and finely honed prejudices, would have released Ms. Lutzow on her own recognizance for this kind of petty offense.  A lot of places would not have charged her at all, but given her what used to be called a station adjustment—the kind of  discretionary treatment still available to the drunken brothers in law of local dignitaries.  But not McHenry County where cash bail is routinely set of all sorts of trivial misdemeanors, traffic violations, and victimless crimes.  The hapless and friendless poor are frequent jail inmates, convicted as yet of nothing but held for days, sometimes weeks.

The poor are often in catch 22 situations.  I know of cases where people were jailed for failing to make a court appearance on a minor or civil matter only because the pitiful public transportation system in the County refused to make a dial-a-ride connection to a route bus.  I have seen a PADS resident still in a hospital gown get run in just hours after his release for failing to make a court date while he was laid up.  This passes for justice in these parts.

Once these folks do come to what laughably passes as bench trial—about three minutes of a judge’s undivided attention—they will be assessed a fine and court costs that they also cannot pay, setting them up for future arrest as scofflaws and sending them right back to jail to begin the cycle again.  It is sort of a reinvention of debtor’s prison.

If Ms. Lutzow, should she recover, can take cold comfort in knowing that her particular screwing was one of degree, you would think that flinty eyed officials, theoretically always on the look out to save government money like good Republicans are supposed to, might want to reassess a policy that puts people like her in jail for extended periods at a cost to the taxpayers of hundreds dollars a day.  Add in her medical bills and the very real possibility that her situation will attract the attention of an ambulance chaser resulting in heavy legal expenses and possibly even a hefty settlement, and there are even more reasons to stop this insane policy.

But this is America, the country with the largest percentage of its population behind bars in the world.  Thousands of careers and jobs depend on keeping it that way.  McHenry County certainly wants to keep up its part.