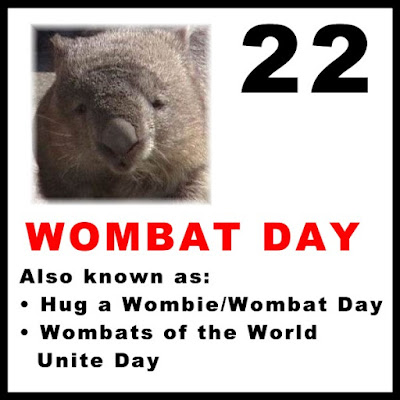 Break out the Champaign and some tough roots, grass, and bark for the guest of honor!  It’s Wombat Day Down Under. It’s an ancient tradition stretching all the way back to 2005.  And so what if those asses in Canberra haven’t gotten around to making it a legal holiday with the Post Office closed, military parades, and bands playing Waltzing Mathilda, it’s good enough to raise a can of Foster’s and throw another shrimp on the barbie.
The occasion celebrates those cuddly short-legged, muscular marsupials native to Australia with pudgy snouts and short tails that resemble small, over-fed bears.  They are adaptable to Australia’s various often in hospitable environments from arid semi-desert to forests and mountain sides.  Not that anyone actually sees them much in the wild.  That’s because they are the world’s largest burrowing mammals—adults average about 40 inches long and can weigh between 35 and 70 pounds—and spend much of their lives in the their extensive burrow systems.  Being nocturnal they generally only come out to dine at night except for the rare darkly overcast, rainy day.
The stout little beasts have powerful forelimbs with impressive claws for digging and large rodent-like incisors to gnaw through their tough diet choices.  Their natural predators were few—the dingo, now extinct Tasmanian devil, and, of course humans.  Over the last century feral dogs have heavily damaged the population.
Wombats are naturally both slow moving and shy, but can be aggressive when startled or threatened.  They have been known to charge humans who get near them and are large and heavy enough to knock down a grown man.  Their long, sharp claws can slash human flesh and bites can penetrate stout boots and thick socks.  On the other hand, humans, both Aborigines and early White settlers hunted them for food.  The settlers, with their fire arms and hunting dogs, quickly reduced the Wombat population and range over much of the southeastern part of the Continent.
Despite holding a day in their honor, Australians have a might ambivalent attitude toward the wombat.  The Aborigines did not seem to esteem them, despite relying on them as a protein source.  They did not imbue them with the spiritual powers and significance of other animals—kangaroos, snakes, crocodiles, sharks, etc.—in their Dreamtime mythologies and seldom depicted them in their rock art.  The origin story about them is hardly flattering—originating from a person named Warreen whose head had been flattened by a stone and tail amputated as punishment for selfishness.
When white settlers—most of them, you will recall, transported prisoners and their military guards—arrived, their opinion of the creatures was not much better.  At first because of the similarity of size and burrow habitations they were mistaken for a kind of badger, the large European weasel and omnivore totally unrelated the local marsupial.  Several Australian place names containing the name badger—Badger Creek, Victoria and Badger Corner, Tasmania  for instance—are really named for wombats.
The English adopted the name from a corruption of the now extinct Darug Aboriginal language.  In 1798 John Price was exploring in what is now New South Wales with James Wilson who had lived with the Aborigines when he recorded in his diary:
We saw several sorts of dung of different animals, one of which Wilson called a Whom-batt, which is an animal about 20 inches high, with short legs and a thick body with a large head, round ears, and very small eyes; is very fat, and has much the appearance of a badger.
That dung or scat is among the most tell-tale signs of the presence of wombats.   Because of their fibrous diet and highly efficient digestive process, wombats leave distinctive, compact cubical shaped pellets.
It took much of the 19th Century to standardize the spelling of the animal.  Meanwhile they were being hunted for meat, sport, and because their burrowing was seen as a nuisance to farming and particularly sheep grazing.  The Europeans characterized the animals in their own folk stories as fat, lazy, and greedy.
By the early 20th Century all three species—the common wombat, Northern Hairy-nosed Wombat, and Southern Hairy-nosed Wombat—were all under pressure.  Wombats were classified as vermin in 1906, and a bounty was placed on them in 1925.  The results were entirely predictable.
The Northern Hairy-nosed Wombat is extremely endangered.  Only 138 were known to survive as of 2007 and their range confined to the Epping Forest National Park in Queensland where they are protected behind a predator proof fence.  Tenuous efforts have been made to re-establish another colony at the Richard Underwood Nature Refuge at Yarran Downs.  The species has become a symbol of Australian efforts to preserve endangered species.
But their Southern cousins and the now far-from Common Wombat are also under extreme pressure.  All species have been declared protected in all states but Victoria where the Department of Environment and Primary Industries still classifies them as a pest and allows both hunting and in some cases, poisoning.


Attempts by conservationists to manage a recovery of the population are hindered by the low fertility and reproductive rates of wombats.  Adult females produce only one offspring each breeding season after a gestation of 20-21 days.  They carry the joey in their well-developed pouches for seven months.  Alone among marsupials, the wombat pouch opens toward the animal’s rear.  This prevents the joey from being smothered by dirt as the mother expands her burrow during which her powerful front legs and claws toss dirt behind her.  The babies emerge as furry miniature adults.  They are weaned at 15 months and on their own and sexually active at a year and a half.
The threatened and endangered status of wombats has evoked some degree of public sympathy and affection for the previously scorned critter.  They are sometimes used as a symbol for conservation efforts and have even appeared on Australian postage in recent years, something that their more glamorous cousins—Kangaroos, Koalas, Tasmanian Devils, and Platypuses achieved decades earlier.
Wombat prestige has also been boosted as they funny looking animals have become staples of Australian kiddy picture books, children’s literature, and children’s television.  One popular animated series features a wombat family.
Still the creatures lag behind those other iconic Aussie animals in public acceptance.  No Australian professional or college sports team has adopted the wombat as their mascot.


Perhaps that is why fans of the animal launched Wombat Day in 2005.  It seeks to honor the animal, but has more than a touch of tongue-in-cheek humor about it.  The only customs I could find associated with the celebration are viewing parties at zoos and animal preserves and baking and consuming homemade chocolate cakes or brownies made in the shape of a wombat.  Which leads me to suspect that the chocolate industry may be behind much of the annual promotion of the holiday.  Oh, they also consume a confection called Wine Gums.  Beats the hell out of me what they are.
October 22 was supposedly chosen because it is smack dab in the middle of the Southern Hemisphere spring planting season and there are said to be certain vague traditions linking wombats with fertility.  These claims are open to question.
Anyway, there you have it.  A new reason to celebrate.  And coming the day after the Chicago Cubs exited the National League Championship Series after four straight losses, this writer needs a cause to celebrate something.  Pass the Wombat Cake.