The Church of Jazz, Duke Ellington and Why it Matters 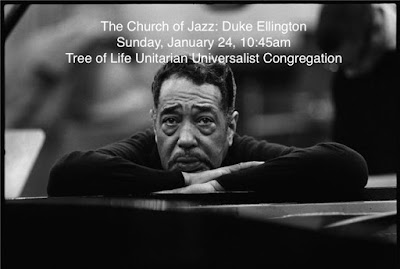 On Sunday, January 24, the Tree of Life Unitarian Universalist Congregation, 5603 Bull Valley Road in McHenry will present the Church of Jazz: Duke Ellington at the regular 10:45am service.
So begins the press release we sent out hoping to alert the denizens of McHenry County to a decidedly unconventional worship and lure some of them into the seats.  What? you say.  Duke Ellington and jazz are yesterday’s news.  We are flogging a cultural phenomenon of 70 years ago.  Not exactly cutting edge stuff for the week the world mourns for boomer icons David Bowie, Glen Frey, and a small gaggle of others whose expiration dates came up at once.  And those cats were old hat.  Most of us are blissfully unaware of the music that throbs in the hearts and souls of a generation who can’t remember a time before the smart phone.  If we really wanted to be unconventional, shouldn’t we start there?
Well maybe we should.  And in fact I believe that in time we will.  And that time will come before those kids’ music ends up on oldies radio.
But I stand by my assertion that this service—the first of a new series over the next few months built around widely different genres that will feature music as spiritual inspiration and a window to the soul is innovative.  The music will speak for itself as performed by top professional musicians and will be amplified with readings, quotes, and brief personal reflections.
A big part of that is the break from the constrictions of a conventional worship service.  Despite the well-earned reputation of Unitarian Universalists for religious eclecticism, and spiritual adventurousness capable of ranging between theism, staunch humanism, and all points in-between, our typical worship experience is only superficially modified from that of our Protestant/Puritan ancestors.
All of the traditional elements of the service are there, with new content plugged in.  The Creed has been replaced by a covenant statement or the Seven Principles of the UUA. Where there were Biblical texts, reading now can come for religious and spiritual traditions form all over the world, or from literary sources, news items, song lyrics, or even advertising.  Hymns are sung, but familiar ones have usually had their lyrics scrubbed of orthodoxy or of gender pronouns and the congregation often sings songs from other traditions and secular sources.  A choir or other musicians often perform one or more main selection and occasionally, if the congregation is sort of high church, introits and benedictions.  There is generally a Call to Worship, a sort of preview of coming attractions.  There is usually a prayer, or if the congregation is allergic to God talk, a moment of reflection or meditation.  Ushers still pass the plate.  The whole thing is bookended by one of Unitarian Universalisms rare rituals—the lighting of the Chalice often accompanied by a brief reading or dedication at the beginning, the extinguishing of the flame at the conclusion of the service.
All of this is built around the meat of the service—the sermon.  UUs are big on the word and our ministers are expected to be deep thinkers, spiritual gurus, prophetic voices, gifted story tellers, and poets.  We may not value pulpit theatrics and razzle-dazzle, but we expect an intellectually challenging presentation.  An emotional connection is nice, too, but not absolutely necessary. Woe be it to the minister who cannot deliver a solid sermon no matter what other pastoral or leadership skills she/he may possess.
My wife, a serious Roman Catholic and the Religious Education Director of a very large suburban parish, says that his elevated importance of the sermon, which in her church are reduced to brief homilies squeezed in between ritual prayers, readings from the Old and New Testaments, and, of course, the Mass, is as sign that we UUs “come from a head place, not a spiritual place.”  She does not mean this as a compliment.  For her and millions of Catholics, the elaborate and familiar rituals of the Mass and the call and response prayers that are known by heart from childhood are doorways to a mystical experience of God.
Still, as Spartan by comparison as our hand-me-down Protestant order of service may be, it has provided just enough familiar churchyness to provide a comfortable home for generations.  But new waves of the un-churched, of the spiritual-but-not-religious, seekers, and a gaggle of freshly minted Nones/Brights/agnostics/atheists who are seen as fertile ground for the future of Unitarian Universalism do not find that same churchyness welcoming.
A whole lot of discussion in the UU blog-o-sphere, in social media, and at conferences is tied up with new ways to be and/or do church to attract these people.  Tree of Life minister the Rev. Sean Parker Dennison has been a leading participant in that ongoing discussion.  Last spring’s day-long Cabaret Church experiment hosted by the McHenry Congregation was one of the most ambitious explorations of the possibilities yet.

The Church of…series while innovative, is not such a radical departure.  UUs and their ancestor Unitarians and Universalists have been pioneers in finding new ways to use music in worship.  The early American Unitarians broke with Puritan austerity early by introducing organs and pianos to accompany previously a cappella congregational singing and expanded the song selection beyond Psalms set to music.  By the 1830’s and ‘40’s their many poets including the brothers Samuel and William Wadsworth Longfellow, James Russell Lowell, and others were setting their verse to traditional hymns borrowed mostly from the Anglicans and Methodists.  In the post-Civil War era they were introducing choirs, previously shunned too Papist or Anglican, including the use of hired professional singers by large, well-off congregations in Boston and New York.  None of that seems shocking now, but believe me, at the time it made religious and cultural waves.


After World War II a movement led by Universalist minister the Rev. Kenneth Patton sought to infuse the worship service with elements of all of the visual and performing arts, including music that reached beyond traditional hymns.  By the ‘60’s, after the union of the two older bodies into the Unitarian Universalist Association (UUA) congregations were experimenting with using all sorts of music as components plugged into the traditional order of service.  Classical performances including soloists and chamber ensembles were common.  Some congregations formed, or hosted, jazz groups.  All sorts of popular songs from Broadway to the rock charts were used in services often to illustrate or compliment sermon topics.  In the ‘70’s Bernice Reagon and Sweet Honey in the Rock were introducing high energy Black Gospel music to the largely white denomination at All Souls Unitarian Church in Washington, DC, on tour, and at General Assembly performances.
But perhaps no genre rooted itself more firmly than folk music.  The simplicity of instrumentation made it easily adaptable to worship situation and accessible to even the smallest and poorest of congregations.  In the ‘60’s and beyond UU congregations swelled with activists drawn by the faith’s reputation for commitment to civil rights, the peace movement, environmentalism, women’s and reproductive rights, and Gay rights and marriage equality, were inspired by protest movement.  Pete Seeger, Malvina Reynolds, Utah Philips, and Kim and Reggie Harris were all members of or associated with UU congregations and there were/are many other respected folk performers.  Others like feminist Holly Near performed so often at UU Churches that she is often identified with us.  In addition to using folk  music in worship services, many congregations hosted, and continue to host, regular coffee houses, concert series, and special performances.
Yet I have heard Millennials, Gen Xers, and younger UUs bemoan all of the folk music as evidence that our graying congregations are stuck in the past.  They see the music as boring and our clinging to it typical Boomer self-aggrandizement and refusal get the hell out of the way.  Fair enough.  We should probably pay more attention to Lady Gaga and Born this Way, anthems by will.i.am, Black Lives Matter rappers, and post-punk head bangers we have never heard of.
In the mean time we have the wider net cast by the Church Of…worship series which aims to go beyond just plugging various musical genres into conventional order of worship slots to making the focus of and integrated spiritual experience.
The Church of Jazz: Duke Ellington will feature to fine professional musicians.


Vocalist Terry Sullivan sang in early music ensembles and small concert choirs before turning to jazz.  She has a degree in flute from Ohio University, but began singing after college. Anita O’Day and Blossom Dearie are influences. Sullivan sings in intimate venues in the Chicago area. She also studied at the Jamey Aebersold Summer Jazz Workshops at the University of Louisville in Kentucky.


Richard Armandi is one of the most versatile and in-demand musicians and educators on the Chicago scene today. As a jazz bassist he has performed with such luminaries as Marion McPartland, Barry Harris, Bobby Shew, David Baker, Jamey Aebersold, Dick Hyman, Scott Hamilton, Carl Fontana and many others, and has performed with such stars as Rosemary Clooney, Bob Newhart, Martin Short, Phyllis Diller, and Rich Little. As a tuba player he has performed with the Lyric Opera, American Ballet Theater, Grant Park Orchestra, Chicago Brass Quintet, and as featured soloist with the New Philharmonic, Ethos Chamber Orchestra, Concordia University Wind Ensemble, and at the 1992 International Tuba-Euphonium Conference. He is in constant demand as a bassist and tubist. As an educator he has served on the faculties of College of DuPage in Glen Ellyn, University of Illinois at Chicago, Triton College in River Grove, and Trinity Christian College in Palos Park, teaching bass, low brass, jazz combo, and improvisation. He has also served on the faculty of the Jamey Aebersold Summer Jazz Workshops since 1990.

Upcoming services in the Church Of… series include the Church of Folk featuring Joe Jencks on February 28, the Church of Vivaldi on April 3, and the Church of Rock on May 1.  Each service will include performances by top professional musicians.
Stop by if you are in the neighborhood.