He may be the most influential American writer ever.  He is certainly among the most widely read.  More than two hundred years after the birth of Edgar Allan Poe on January 19, 1802 he is easily the most widely read writer of the 19th  Century, and not by just captive college students but by ordinary readers who continue to plunk down hard money for collections of his stories and poems.
He is credited with inventing the modern detective story.  In The Murders in the Rue Morgue his hero, C. Auguste Dupin was a brilliant eccentric who undertook the investigation of the grisly and baffling murders of a woman and her daughter after reading a newspaper account. He had a tenuous, testy relationship with the police but worked as an outsider. The story of his investigation was narrated by an unnamed friend and associate.  Dupin used keen powers of observation and reasoning to unravel the case.  He also used crude forensic evidence—a hair found at the crime scene that proved to be nonhuman.  He revealed his final, shocking conclusion and then explained to the exasperated Prefect of Police his methodology in uncovering the truth.  This set the pattern for detectives like Sherlock Homes, Hercule Poirot, Nick and Nora Charles, and Spenser.  In recognition of Poe’s importance, the Mystery Writers of America named their annual prizes the Edgar Awards.

Poe is even more famous for his horror stories.  These, too, were an innovative breakthrough that invented a genre.  His were not just tales of monsters or ghosts told around a campfire.  His horror was psychological, the creation of the human mind as in The Tell Tale Heart.
And his work presaged and influenced the development of science fiction.  His famous hoax The Unparalleled Adventures of One Hans Pfaall, which he wrote for the Southern Messenger in 1835, fooled the people of New York City when he reprinted it in a newspaper there nearly a decade later.  It was about crossing the Atlantic in a balloon.   Several of his other stories also had elements of science fiction which were picked up Jules Verne, Sir Arthur Conan Doyle, and Edgar Rice Burroughs among others.
All of these are “only popular genres.”  You can almost hear the serious professors sneer the words, “not serious literature.”  But in creating these tales for the infant medium of the popular magazine, he also helped create the modern short story as a distinct form.  Now that magazines are disappearing and short stories only get printed obscure literary journals, the guardians of our culture revere the form and wring their hands at its tenuous survival.
And then there are the poems.  People who do not read poetry—almost everyone—know and love The Raven, Annabelle Lee, and The Bells.  America was awash with poets—many great ones—but no one was writing with such power, such lyricism, and such groundbreaking unconventionality.  Despite their strong rhythms and rhymes they seem more modern and accessible than lofty sentiments by William Cullen Bryant or James Russell Lowell.
Of course Poe’s enduring popularity owes a great deal to his image as the tortured soul who married his teen age cousin and lost her to consumption, drowned his sorrows in brandy and perhaps opium, and died penniless in Baltimore after being found insensible in a saloon at the age of only 40.  Books, plays, and films have been made celebrating that persona.
His physical image is as recognizable as any movie star.  Only a handful of photographs were taken in his life.  The most iconic, taken within a couple of years of his death, shows a handsome, if dissolute man, with dark flowing hair, high forehead, a neat mustache, intense dark eyes with bags below hinting at a night of excess before the sitting. It decorates posters, t-shirts, coffee mugs, and mouse pads.


How can heavy weights like Herman Melville, Walt Whitman, or even handsome Nathaniel Hawthorne compete with that?
Yet Moby Dick routinely tops lists of important books that no one reads, while even pimply-faced, basement dwelling, X-Box mavens of the supposed dumbest-generation-ever have read and loved Poe.  Oh, the injustice!
Ironically, Poe may have even invented one form a prose that the literati worship—textual criticism.  Beginning with his tenure as editor of the Southern Messenger and continuing as he tried to cobble together a meager income as one of America’s first free lance writers, he wrote hundreds of columns of literary criticism.  He was among the first, if not the first, to focus primarily on the effect of the style and of the structure in a literary work and to analyze symbolism.  He could also be very harsh and personal in his attacks on authors whose work offended him.  That included many members of the established, mostly New England based elite.  He famously savaged Nathaniel Hawthorne among others.  Of course, when he was writing for a predominately Southern audience, this went over well.  It proved less popular as he placed pieces in New York, Philadelphia, and other northern publications.
One of the men he offended got his revenge.  Rufus Griswold was then a well known writer, editor, and anthologist.  Poe ripped him a new one.  As soon as he got word of Poe’s death in Baltimore, Griswold rushed to be the first to print an obituary in New York.  He painted Poe as a maniac, drunkard, practitioner of incest, and literary fraud.  He quickly followed up with a biography elaborating his charges.  The book sold well and cemented Poe’s public image.
But if Griswold thought his character assassination piece would bury Poe’s reputation and work, he was mistaken.  Instead, the country grew more fascinated by him.  Posthumous sales of all of his works soared.  Just like Jim Morrison, it seems that even back then there was a taste for wild, romantic, talented, tragic bad boys who died young.
The official Poe Museum web site argues that while Poe did drink and battled depression, Griswold’s characterization was a wild exaggeration.  Perhaps so.  It even says that his sordid and lonely death, attributed at the time to congestion of the brain and long assumed to be caused by either alcohol poisoning or advanced cirrhosis of the liver, may actually have been caused by rabies.  Who knows?
But we do know that for many years a woman bundled in black and heavily veiled came annually to Poe’s grave and left roses and brandy.  It was an annual newspaper story.  And every time it happened, libraries and books stores experienced a run on Poe.
Anyway, here is a sample of what some of the excitement was about. 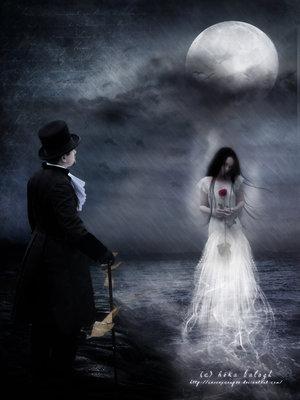 Posted by Patrick Murfin at 4:53 AM