A while ago I put up a couple of posts which mined the 1967 issue of Apotheosis, the grandiosely named student literary magazine of Niles West High School in Skokie, Illinois.  Those pieces were prose short-short stories which were ever-so-earnestly written.  But the little magazine was also littered with my juvenile poetry.
Ouch!  The poems were generally as excruciating as you would image.  There were three short pieces inspired by my exposure that year to e. e. cummings and Lawrence Ferlinghetti—my stab at off beat bohemian.  I will save those for some other day when I have nothing better to write about.
Today I am inflicting on you the longest piece of all, which occupied a whole page in two columns all by itself.  It was a memoir piece which evoked the playground of Churchill Elementary School in Cheyenne, Wyoming circa 1954-55 when I was five and six years old and in kindergarten and first grade.  The memories were like random snap shots found years later in a shoe box buried in a corner of the basement—fragmented and without context, the subjects at best hazily recalled.  Those memories may have been sharper to the 17 year old who wrote them than to the 67 year old reading them today.
The piece would have been better off as a prose memoir, but I was determined, for some reason to hammer it into a poem.  That reason might have been Dylan Thomas’s memory poems, although my work lacked all of his lyricism.  I used a clunky devise of variations on the opening lines of each stanza.
A couple of notes of explanation are required.  First, the long blue busses described were Air Force vehicles delivering the children of personnel from Frances E. Warren Air Force Base to the school.  There were no yellow school busses because the rest of us lived close enough to the old school building to walk.
The Black girl was, I believe looking back on it, Haitian.  Just how she ever got to Cheyenne is anyone’s guess.  It must have been a terribly hard experience for her.  I am sure gaping dolts like me didn’t make it any easier.  She was the first Black person I ever saw.  One day I pretended to lose something in the gravel by the high slide so I could get down on my hands and knees and crawl over to where she was standing to stare close-up to the black skin of her thin legs above her white socks.
It must have been a horrible and humiliating experience for her.  Made worse by the fact that I never once, for all of my curiosity spoke to her the entire year. 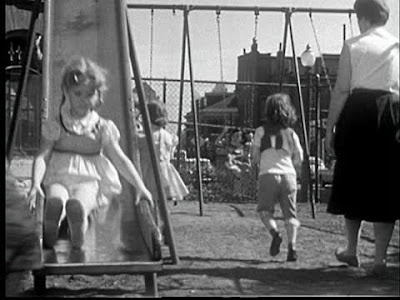 What I Remember of Play

I remember-
Straw yellow sunlight
Filtered through trees
That seemed so big
God must have been at their tops,
Looking down on
Me as I played on the gravel
And sat in their roots to rest.

And I remember­
The sun tan brick
Of the school building
Always looking dusty,
Even after rain washed it.
The high, wide windows
Looked down on the
Playground below.

This I remember­
Only her hair,
Only her plain brown hair
Pulled back in a bun
With a smell that
Excited my nose.
She was but six
And I was hut five
As we sat in the Roots together.

And this to remember­
Boys abreast up in a line
Then charging, shouting
At the top  of our lungs,
“Kill  the  Japs,
Kill the Nazis,
We’ll win!”
And the little toy flag
That fell in the dirt
and was solemnly burned.
This is remembered-
Rosa had dark brown skin
And fine, windblown hair,
But her dress was thin
And its colors faded.
She never spoke but
Always looked through
Frightened, dark eyes.

I remember this-
Long blue busses
Coming every morning,
Leaving every night.
Friends getting on with the
Driver In green uniform
And stiff cap, And me always
Staying behind

This to remember­
Billy was smaller by far
Than the rest of the boys who
Played in the yard.
But it was Billy
Who led us in games
and shouted the loudest at play.

And I remember this­
The bean tree stood
In the corner of the yard.
And in the fall the boys
Would fight to see
Who could get the most
Of the long black, stiff beans.

And this is remembered­
From the top of the slide
I could look down at the sun
Shining off its slick face
And how tall I felt
Looming down
On my friends in
the school yard far below.

I can remember­
The little girl in
The frilly pink dress
Whose language I did not know,
And did not care to know,
for she was Black
And I did not
Know why she was Black.

But most I remember-
A dream that never was,
Shaded by trees from
The straw yellow sunlight,
I got on the blue bus
And the girl with her hair tied up in a bun
Said, “Goodby,
Take good care of him.”
As the bus pulled  away
I knew that I
Would never return
To the play yard,
And that was the
End of my youth.